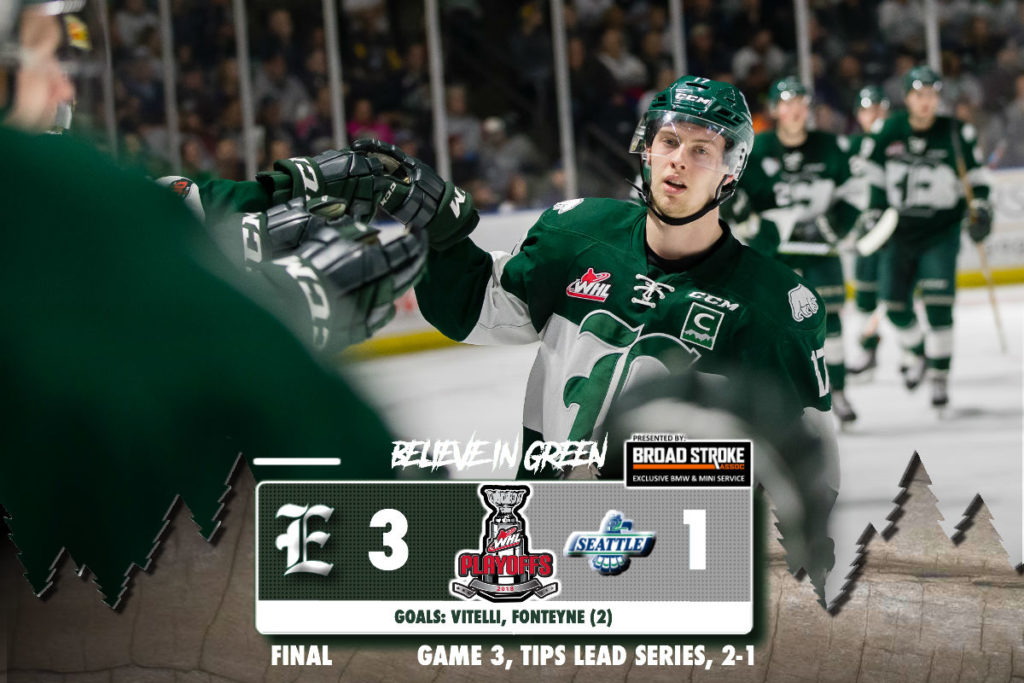 KENT, Wash. – Matt Fonteyne scored twice and Carter Hart furnished 33 saves to lift the Everett Silvertips to a 3-1 victory and a 2-1 series lead over the Seattle Thunderbirds before 5,600 fans at accesso ShoWare Center on Tuesday night in WHL Playoff action.

The Silvertips recovered from an early 1-0 deficit and 22 shots by Seattle in the first ten minutes before Reece Vitelli tied the game. They recaptured home ice advantage in the series and outshot Seattle, 25-10 in the final 40 minutes.

The Silvertips return to Kent on Friday, at 7:35 PM PT (Fox Sports 1380 / WHL Live) for Game 4 of the series. Tickets for Game 5 of the first round, Saturday, Mar. 31 in downtown Everett, are on sale now by clicking this link.

** If necessary
In Seattle’s first home playoff game of the series, they capitalized on an early Tips penalty and Nolan Volcan buried a rebound just 1:38 into the game for a 1-0 advantage, set up by Donovan Neuls’ one timer at the right circle. Hart then helped the Tips sustain the one goal deficit with several point blank saves after the Tips were outhsot, 7-0 in the first three minutes and surrendered 22 in the first 10 minutes.

Eventually, their gradual containment led to more time in the offensive zone, and eventually capitalized to tie the game at 8:56. Reece Vitelli’s first goal of the playoffs came off a screen set in front of Liam Hughes, and Vitelli successfully deflected Gianni Fair brother’s point shot at the top of the crease.

Matt Fonteyne, who delivered a devastating check toward the end of the first period, followed up with a power play goal by winning a battle for a loose puck at 4:58 of the second period. Jake Christiansen funneled a left point shot to the net, and Hughes leaked a rebound which was eventually finished for Fonteyne’s first goal of the series and a 2-1 Tips lead.

Hart and Hughes exchanged a series of high grade saves deep into the third period and Seattle eventually pulled Hughes for a sixth attacker. After the Tips cleared the zone, Matt Fonteyne spun an empty netter with 31 seconds left to seal the game.