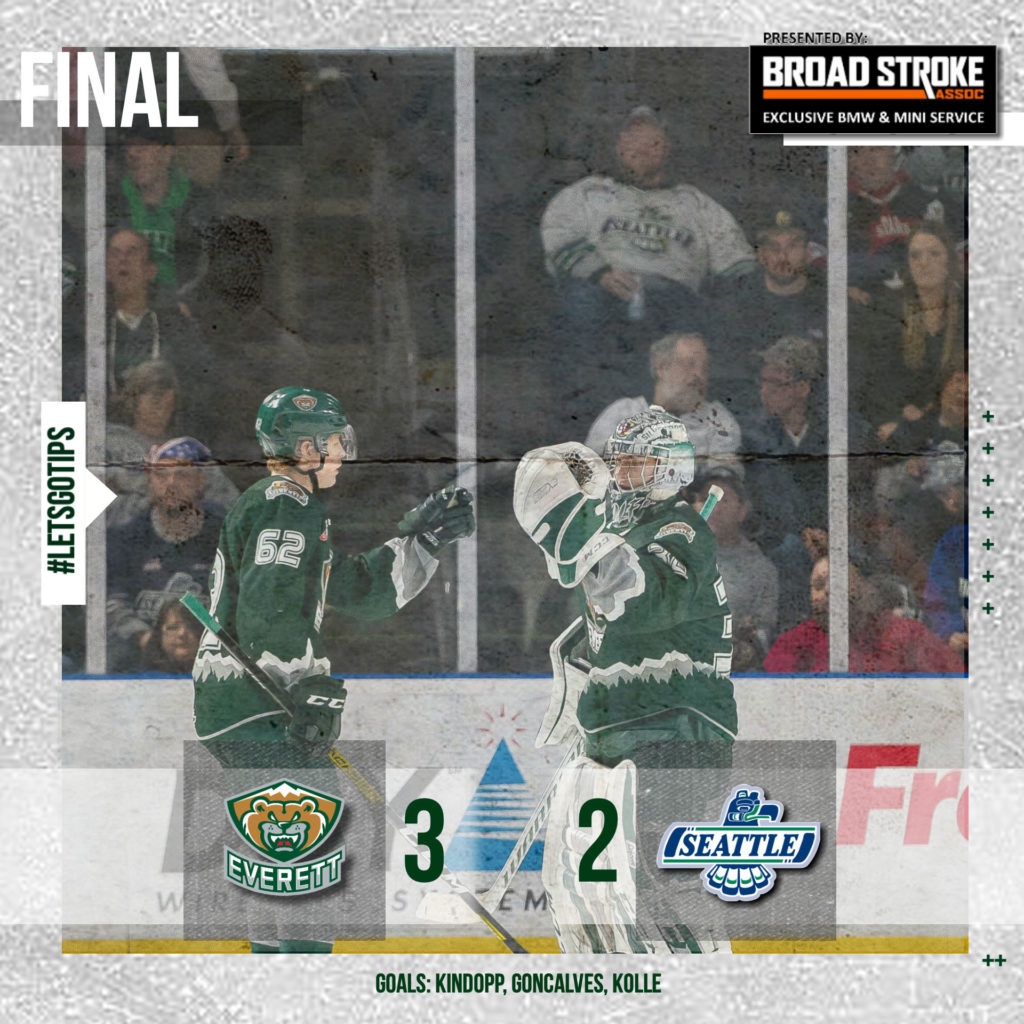 KENT, Wash. –  Dustin Wolf turned in 23 saves as a key contributor on six penalty kills, and the Everett Silvertips outlasted the Seattle Thunderbirds in a 3-2 victory in the regular season series finale before 5,255 fans on Sunday at accesso ShoWare Center. The win helped the Silvertips clinch home ice advantage in the opening round of the WHL Playoffs.

The Tips won for the 20th time in 23 games (20-2-1) to stay one point back of Portland for first place in the U.S. Division with five games remaining. Gage Goncalves earned a multi point game, Ty Kolle stashed the game winner, and the Silvertips finished the season series 7-3 over Seattle, earning their 21st win on the road this season.

UP NEXT: The Silvertips rest for four days and return to their road swing Friday, visiting Tri-City at 7:05 p.m. (KRKO / Tips App / WHL Live). The Silvertips will host the Vicotria Royals on Friday, Mar. 20 for Fan Appreciation Night in their next game back home, with doors opening at 6:00 pm for Hockey Happy Hour presented by Broad Stroke Associates.

Through much of a scoreless opening few minutes, the Silvertips volleyed with Seattle on puck possession and Wolf came up with a big save on Matthew Rempe, who snuck behind the defense to keep the game scoreless. Bryce Kindopp then stashed a loose puck to the back of the net for his 40th goal of the season for a  1-0 lead at 14:44, becoming the first Silvertip since Josh Winqiust to reach the 40-goal plateau (2013-14).

Keltie Jeri-Leon’s power play goal, scored through through traffic off a face-off win at the right circle, tied the game at 2:23 of the second but the Tips responded with back to back goals to grab a 3-1 lead. Gage Goncalves muscled his way through a jam at the crease to deposit his 33rd goal of the year at 11:12 to restore the lead.

The Tips then opened up shot lanes and funneled heavy pressure to the Seattle net, eventually leading to Ty Kolle’s 22nd goal of the year at 17:15 for a 3-1 lead after Roddy Ross turned away Kasper Puutio’s long point shot.

Wolf came up again with another big test passed, stopping Henrik Rybinski, point blank early in the third to keep the Tips up by two goals. Payton Mount’s power play goal cut the deficit to 3-2 with 3:11 left in regulation, but Wolf and the Tips withstood Seattle’s extra attacker pressure to preserve the victory.

Ross took the loss in net with 22 saves.

GAME NOTES: Scratched from tonight’s game were Hunter Campbell, Wyatte Wylie, Gianni Fairbrother, and Jalen Price … Puutio’s pair of assists gave him 11 points in the last 12 games … the Tips outshot Seattle 32-25 … Seattle had their magic number remain at six points to clinch the final wild card berth in the Western Conference … the Silvertips earned four points in a three-game weekend for the ninth straight time this season.