TIPS WIN » From A to Zellweger 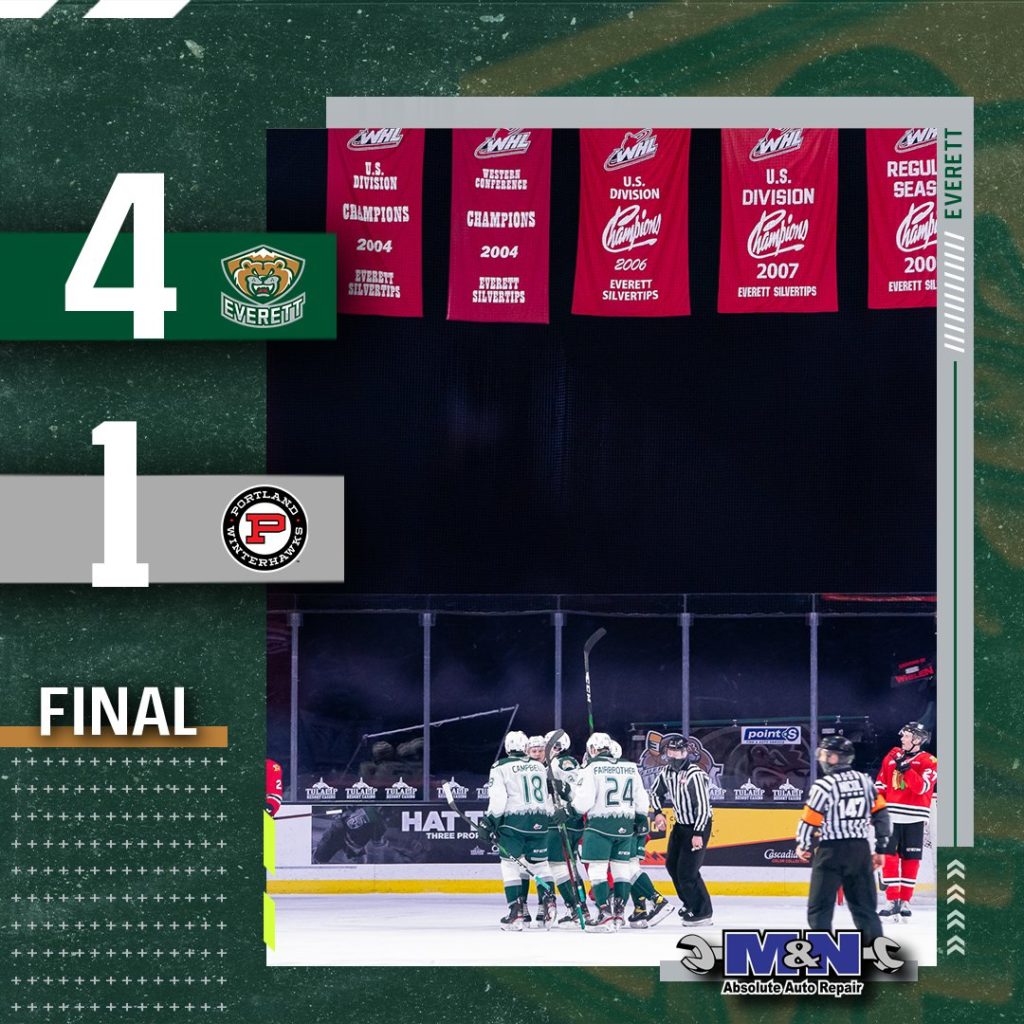 The Silvertips won for the seventh time in their first eight games, getting through their first third of the 24 game schedule in first place of the U.S. Division at 7-1 (14 points), moving out to four points ahead of Portland. Dustin Wolf made 33 saves and the Silvertips earned their sixth win in the last seven meetings (6-0-1-0), head-to-head.

UP NEXT: The Silvertips conclude their three-game homestand on Tuesday, Apr. 6 in a rematch against the Winterhawks at 7:05pm (KRKO/WHL Live) in downtown Everett. Viewing packages remain on sale at watch.chl.ca. Play-by-play “Voice of the Tips” Mike Benton will have pre-game coverage beginning at 6:30 p.m.

The Silvertips survived a double minor penalty kill while Dustin Wolf turned in a tough save on Jaydon Dureau to keep the game scoreless. Using the kill as momentum, they grabbed a 1-0 lead at 9:21 when Olen Zellweger hammered a drive from the blueline past Dante Giannuzzi for his second goal of the year.

Zellweger then generated a rebound opportunity for Campbell, parking his second goal of the season from between the circles with 1:01 left in the period.

Jackson Berezowski stood at the net to shield Dante Giannuzzi from Gage Goncalves’ fifth goal of the year, 9:03 into the second period when Goncalves snuck a wrister through traffic from the left circle. Portland gave their answer to cut the Tips lead to 3-1 after a Mason Mannek wrist shot off the rush with 8:01 left.

The Tips tightened up play in the third period, limited Portland to six shots, and sealed the game on Hunter Campbell’s empty netter with 54 seconds remaining.

Giannuzzi took the loss on 33 stops.

GAME NOTES: Silvertips scratches included Aidan Sutter, Brady Van Herk, Jalen Price, and Evan May … the Tips outshot Portland, 37-34 and have won four straight meetings over the Winterhawks in downtown Everett … the Silvertips top-ranked penalty kill kept Portland to an 0-of-3 night on the power play … Gage Goncalves producd a 15-of-22 night at the face-off circle.