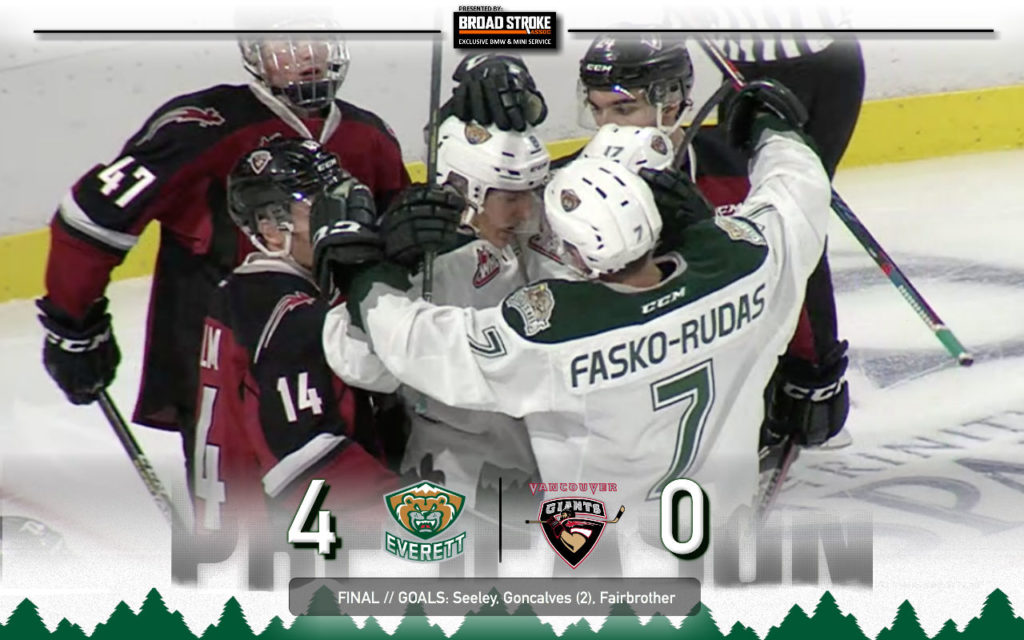 LANGLEY, British Columbia – Dustin Wolf earned his second shutout in his second consecutive preseason start, while Gage Goncalves bagged a pair of goals to help lead the Everett Silvertips to a 4-0 victory over the Vancouver Giants in a preseason tournament on Sunday at Langley Events Centre.

Successfully bouncing back from a defeat on Saturday against the Victoria Royals, the Tips buried three goals in rapid fashion during the first period, including Ronan Seeley’s first to start the scoring. Gianni Fairbrother finished off the scoring in the third period while the defending Western Conference champs improved to 2-1-1-1 for the seven-game preseason schedule.

UP NEXT: The Silvertips enter their final week of preseason facing a home-and-home series against the U.S. Division rival Seattle Thunderbirds, starting Tuesday, 7:05 p.m. at ShoWare Center in Kent. The Tips return home for the preseason finale on Saturday, Sept. 15 against the Thunderbirds at 7:05 p.m.

Seeley lifted the Tips to a 1-0 lead at 4:19 of the first period when he won a battle along the left wall and forced his way to the net, stashing a forehand attempt past Trent Minor while fighting through traffic. Goncalves boosted the Tips lead to 2-0 at 6:03 on his first goal of preseason play, winning another battle at the net and cashing in a rebound from Kyle Walker’s point shot.

Goncalves came back for his second goal with 4:08 left when he drove the net wide from the left wing and converted a forehand wraparound attempt.

Wolf only needed four saves to keep Vancouver off the board in the first period and showcased his glove in the second period on a stop on Matt Barberis, one of eight saves he made in the middle frame.

Fairbrother ended the scoring on a power play goal at 8:39 of the final period, his first goal of the preseason when he held the puck at the right boards, maneuvered a defender and unloaded a snap shot from inside of the right circle.

Wolf made 10 stops in the final period to turn in his second shutout in a week.

NOTES: Silvertips scratches include Peter Melcher, Riley Sutter, Jake Christiansen, Conrad Mitchell, Wyatte Wylie, Connor Dewar, Bronson Sharp, and Sahvan Khaira … Dewar, Sutter, Christiansen, and Wylie are currently away at NHL training camps … Goncalves, a native of Mission, B.C., has three points in the last two preseason games … the matchup was the only time the Silvertips will face the Giants in preseason play this year … the two games were a return for Dylan Anderson to his hometown of Langley, B.C.

Opening the Silvertips home schedule, which covers 34 games this season at Angel of the Winds Arena, is Opening Night against the Vancouver Giants on September 22 at 7:05 p.m. All fans will also witness the raising of the Silvertips sixth U.S. Division championship banner and second Western Conference championship banner to the rafters before the opening puck drop, and the first 5,000 fans at the doors will receive a collectible Silvertips magnet schedule, presented by Lamoureux Real Estate and Sound Transit. Season Tickets and Mini-Plan Packages are available at www.everettsilvertips.com/season. Opening Night for the Tips 2018-19 season is Friday, Sept. 21 at Vancouver (7:35 p.m., 1380 AM / 95.3 FM KRKO).