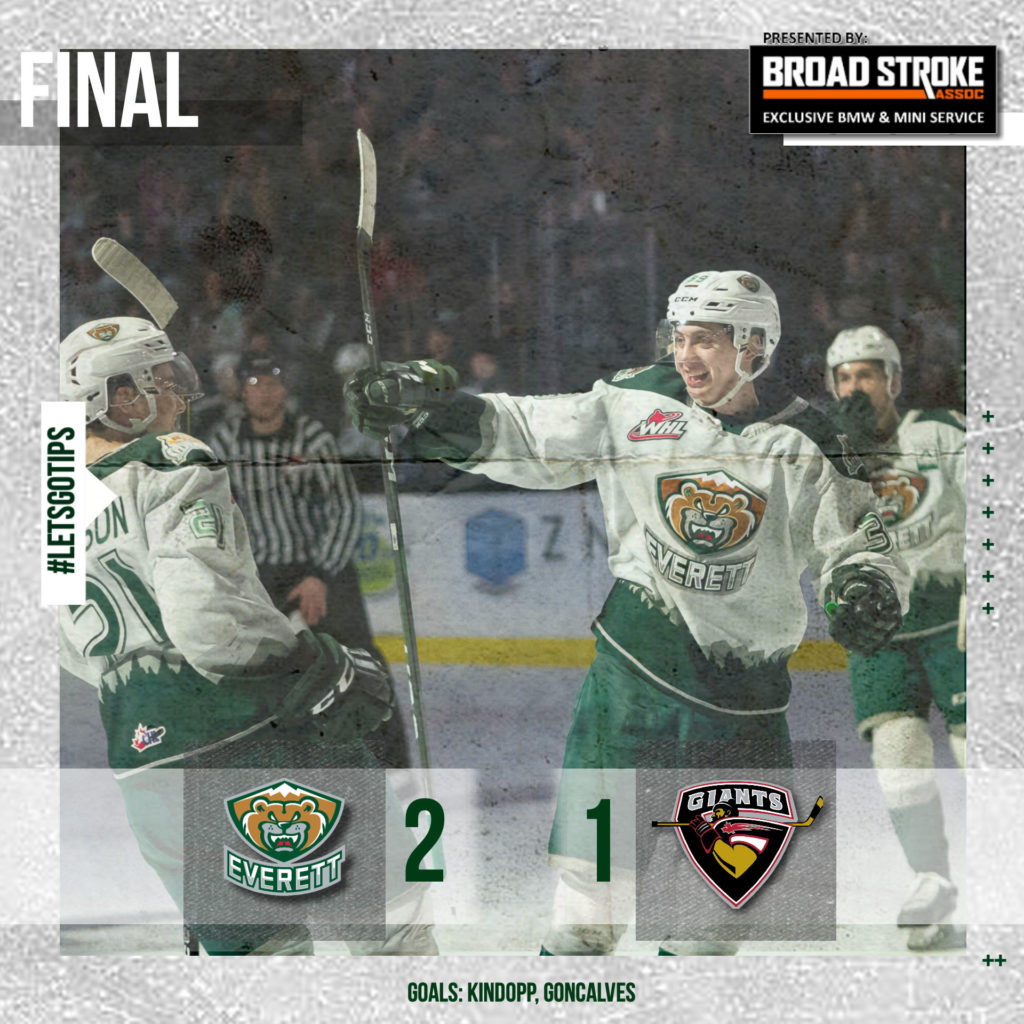 EVERETT, Wash. – Gage Goncalves broke a 1-1 tie with a power play goal in the third period and the Everett Silvertips defeated the Vancouver Giants, 2-1 on Saturday night before 7,973 fans in downtown Everett on Saturday in WHL action.

Dustin Wolf made 15 saves in his return to the crease, while Bryce Kindopp logged his 34th goal of the season. The Silvertips ended Vancouver’s 11 game win streak and earned their ninth straight home victory.

UP NEXT: Everett hits the road for a three-game road swing, starting with a trip to Portland to meet the Winterhawks on Sunday. The Tips travel to Kennewick and Kelowna before returning home for a meeting with the Kelowna Rockets on Saturday, February 29th. Game time is 7:05 pm for that one as doors open at 6:05 pm.

Everett put on the pressure as they outshot Vancouver 10-7 in the opening period. It was the Giants who would get the opening goal as Milos Roman scored on the power play with less than a minute to go and after twenty minutes, Vancouver had a one-goal lead. Everett had fourteen faceoff victories in the first while the Giants were limited to just five.

The middle period saw Everett push the pace even more but ran into a hot Trent Miner between the pipes for Vancouver. It wasn’t until the 16:02 mark of the second that Everett found the back of the net thanks to Bryce Kindopp. The Silvertips captain put home his 34th goal of the season, which puts him in fifth place for goals in the WHL this year. With Kindopp’s equalizer, set up by Dylan Anderson’s deflection to the net, both teams headed into the final period needing just one goal for a win.

Both teams had their chances in the final period but Everett would not let this game slip away. To be more specific, Gage Goncalves wouldn’t let this game slip away. With under five minutes to go, Goncalves fired home a Cole Fonstad pass from the right circle on the power play to put Everett on top 2-1 with 4:41 left. The Silvertips would not give up another goal as they beat the Giants and took home two significant points.

Giants netminder Trent Miner took home the third star of the night as he made 33 saves on 35 shots. Bryce Kindopp was named the second star for his second-period tally while Gage Goncalves earned the first star as he had two points, including the game-winning goal in the third period. With his two points tonight, Goncalves now has five points in his last four games.

GAME NOTES: Scratched from tonight’s game were Hunter Campbell, Gianni Fairbrother, and Aidan Sutter… With his win tonight, Dustin Wolf has now got wins in his last four starts and has given up just one goal or less in those games… In his last two games against Vancouver, Gage Goncalves has scored the game-winning goal in both of them … the Tips swept their five game homestand.