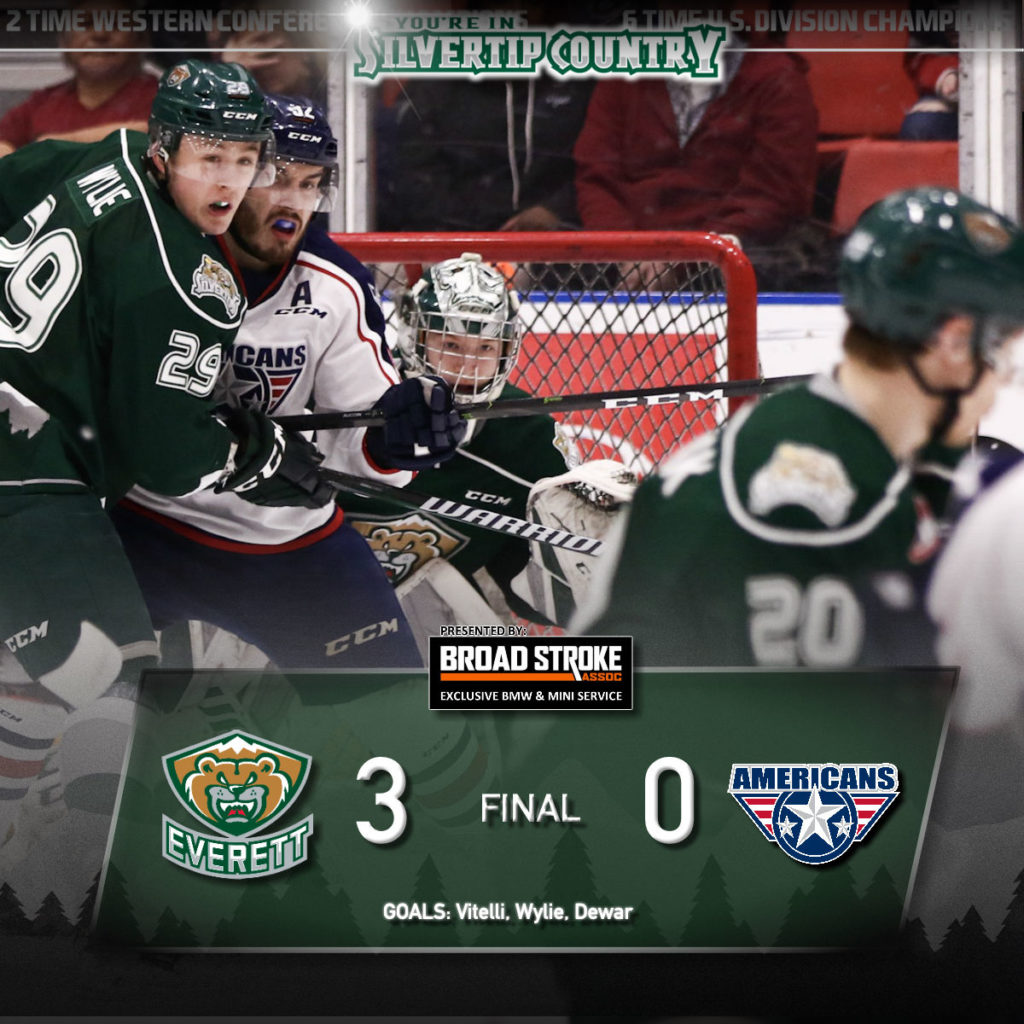 KENNEWICK, Wash. –  Reece Vitelli broke a scoreless tie in the second period and Dustin Wolf, coming into the game just 1:38 in, stopped 25 shots to help lift the Everett Silvertips to a 3-0 victory over the Tri-City Americans on Friday night in WHL action before 3,973 fans at Toyota Center.

Wolf, relieving Max Palaga (1 save) early on, made 11 saves in the third period to maintain a two-goal lead before Connor Dewar buried the game on an empty netter with 53 seconds left in regulation. The Tips won the season series, 5-3-0-0 and improved to 2-0 on their five game road trip, moving back to two points ahead of Vancouver for the top spot in the Western Conference after Spokane defeated Vancouver, 4-1.

UP NEXT: The Tips head to Kent, Wash. for the final time in the regular season, a 6:05pm face-off against the host Seattle Thunderbirds (KRKO / WHL Live / Amazon Alexa). The Tips will return home for Fan Appreciation Night on Mar. 16 vs. Victoria at 7:05pm. Tickets are on sale, along with WHL Playoff packs, at www.everettsilvertips.com/tickets.

The Tips funneled 11 shots on net in the last 11 minutes of the period, which were all stopped by goaltending counterpart Beck Warm. Wolf’s biggest save of the period came on a bid by Nolan Yaremko from the right circle.

The Tips broke through for a 1-0 lead just 3:29 into the second period. Reece Vitelli cruised to the right post and finished Dawson Butt’s cross-ice pass for his 11th goal, followed up by Wyatte Wylie overpowering a defender at the left circle and burying a snap shot through traffic with 3:46 left for a 2-0 lead.

Wolf turned in eight saves in the second period including a flurry of stops on Riley Sawchuk. He continued to hold the Americans off with 11 stops in the third period, the most threatening chance on a Sasha Mutala drive to the net early in the period.

Dewar completed a relay by Bryce Kindopp, behind the Tri-City defense, for the empty netter and his 35th goal of the season.

Warm took the loss on 33 saves.

NOTES: Silvertips scratches included Conrad Mitchell, Riley Sutter and Jalen Price… the Silvertips are 24-7-2-1 against U.S. Division opponents … Martin Fasko-Rudas collected an assist in his first game back from injury, after missing four in a row … the Tips avoided any penalty kill time in the game against Tri-City … they have strung together back-to-back shutouts in the last two visits in Kennewick, also winning 2-0 on Jan. 25.