TIPS WIN // Going Back For Seconds 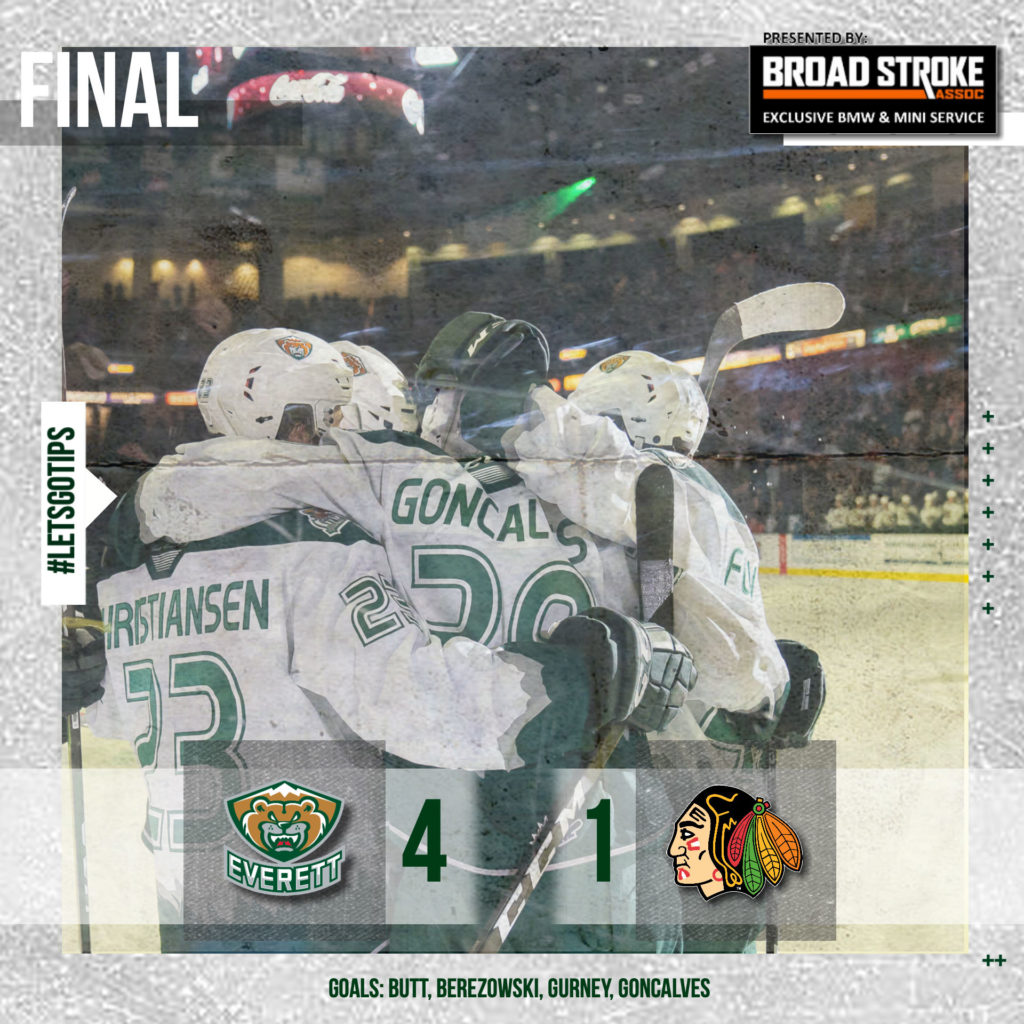 EVERETT, Wash. –  With some power play work and outstanding goaltending, the Everett Silvertips used three unanswered goals in the second period and defeated the Portland Winterhawks 4-1 in front of 7,483 fans at Angel of the Winds Arena on Saturday for their second straight win against Portland.

Everett has now won ten of their last twelve games and is 36-12-3-1 on the season after the victory. Jake Christiansen logged two assists, Dawson Butt scored a goal and an assist – and the Tips handed Portland their second loss in regulation since Nov. 30 (both losses have come from the Silvertips).

Also, the Tips moved to within seven points of first place in the U.S. Division.

UP NEXT: Everett continues their five-game homestead with their only meeting against the Moose Jaw Warriors this season on Wednesday, February 19th at 7:05 pm. The Tips will then take on a pair of BC opponents as they face off against the Prince George Cougars Friday before battling the Vancouver Giants Saturday night. Friday’s puck drop is 7:35 pm and Saturday’s game starts at 7:05 pm.

Both teams were ready from the jump as each team had quality scoring chances in the first period. Dawson Butt got the scoring started as put home his sixth of the season past Portland netminder Joel Hofer. It was Butt’s first goal since he put home two against the Prince George Cougars on December 27th. Five minutes later, Portland tied it at one as Seth Jarvis connected with Jaydon Dureau, who roofed it past an outstretch Dustin Wolf. After twenty minutes, it was knotted up 1-1 with Portland leading the shots 11-8.

The Silvertips came out firing on all cylinders after the first period. 1:27 into the second period, Jackson Berezowski scored on the powerplay off a Kasper Puutio shot to give Everett the lead once again. With the goal, Berezowski has now doubled his point total from all of last season as he’s even with fifteen goals and fifteen assists through fifty games. Justyn Gurney made it a two-goal lead seven and a half minutes later off a Dawson Butt pass to make it 3-1 Silvertips before Gage Goncalves scored his first goal since February 7th to Everett a 4-1 lead after forty minutes.

Everett would hold off Portland to secure a 4-1 win and get their second straight win against the Winterhawks. Dustin Wolf made twelves saves in the final period as Everett gets their second straight win. After Saturday’s win, the Tips have 76 points this season and find themselves seven points back of the Winterhawks for first place in the US Division. They are currently third in the WHL overall standings with Edmonton and Portland ahead of them.

Jake Christiansen took home the first star of the night as he finished with two assists and seven shots. Taking home the second star was Dustin Wolf as he made thirty saves on thirty-one shots and now has victories in seven of his last eights starts. Rounding out the three stars was Dawson Butt, who’s two points tonight tied him with a single-game season-high.

GAME NOTES: Scratched from tonight’s game were Hunter Campbell, Hunor Torzsok, Gianni Fairbrother, and Michal Gut… Jake Christiansen’s multi-point game was the thirty-first in his WHL career… Saturday was Dustin Wolf’s 54th game in his career where he allowed one goal or less…