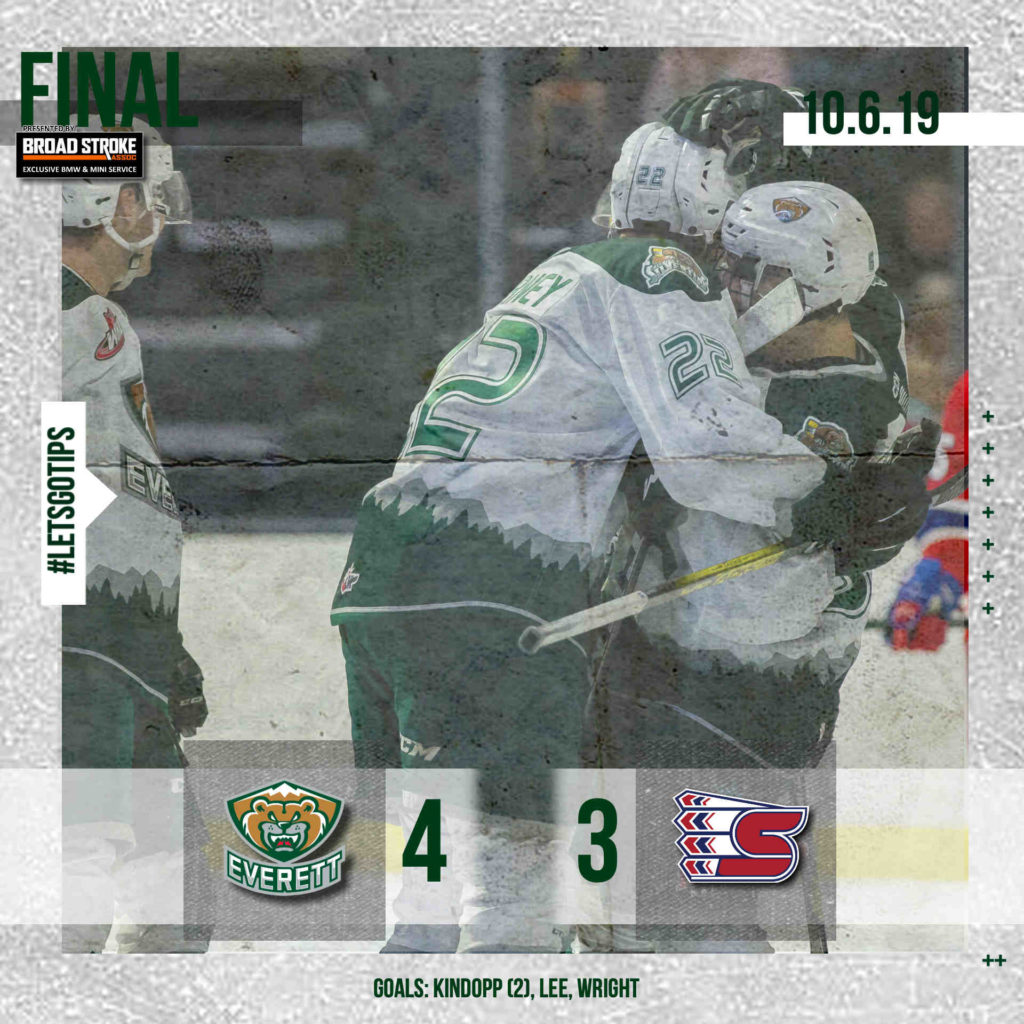 SPOKANE, Wash. – Bryce Kindopp continued his torrid pace wth a league leading seven goals by the end of the night, and pumped in two goals with an assist, while Michal Gut generated three assists to lift the Everett Silvertips to a 4-3 comeback victory over the Spokane Chiefs before 3,401 fans on Sunday in WHL action at Spokane Arena.

Kindopp put the Tips up 1-0, just like last evening in Kamloops, when he smashed in a pass between the circles, by Gut from behind the net at 5:15 of the first period. Bear Hughes answered with a power play goal on a wrister through traffic at 8:36 for a 1-1 tie and Adam Beckman finished a snap shot from the left circle at 3:13 of the second period to put Spokane in the lead, 2-1 for the first time all night.

The Silvertips responded when Kindopp helped generate the attack up ice for Wright’s first career goal. Michal Gut sprung Kindopp up the left wing, and his pass to the net was deflected by Wright through Campbell Arnold’s five hole for a 2-2 tie at 14:24.

Goin' to the net for your 1st in @TheWHL?

Just 1:41 later, rookie Brandon Reller’s first career goal put Spokane back in the lead, 3-2 on a tic-tac-toe finish at the left post.

The Tips rallied for their two goals early in the third period to seize the lead. Brendan Lee crashed the net and buried a rebound for his first career goal at 1:39 to tie the game and Kindopp swung Michal Gut’s pass to the right circle past Arnold for a power play goal, at 3:53 to put the Tips back in the lead again.

Keegan Karki withstood a pair of goal mouth scrambles late in the game and turned away a sharp angled shot as time expired, securing his first career WHL win on 27 saves.

Arnold took the loss on 21 stops.

THREE STARS OF THE GAME:

NOTES: Scratched from the lineup were Braden Holt, Martin Fasko-Rudas, Conrad Mitchell, Gage Goncalves, and Jackson Berezowski … the Tips have improved to 7-0-1 in the last eight regular season visits to Spokane … Kindopp wrapped up the weekend with six points in two games against Kamloops and Spokane, with the Tips bagging four points around travel spanning 900 miles, round trip.

UP NEXT: The Tips finish the four-game road swing on Wednesday at 7:05 p.m. (KRKO / WHL Live) against the host Victoria Royals at Save-On-Foods Memorial Centre and return home on Friday, Oct. 11 for a 7:35 p.m. match-up with the Blazers at Angel of the Winds Arena.