TIPS WIN // Holt’n The Fort Down 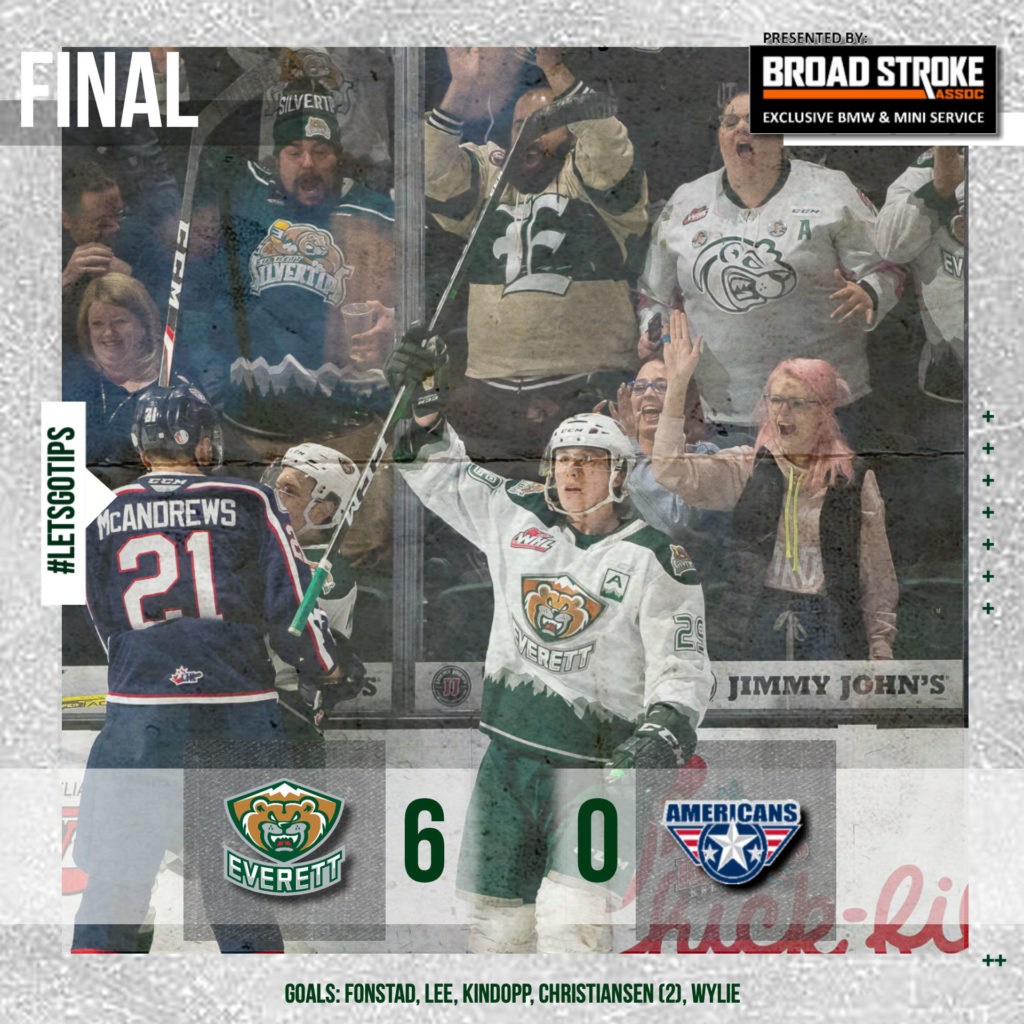 Leading the way offensively was Jake Christiansen, who had two goals in the second period while Bryce Kindopp scored his team-high 39th goal of the season on the power play. Between the pipes was Braden Holt, as he made his second consecutive start against the Americans. Holt was outstanding in net as he stopped all 16 of the Americans’ shots to earn his first WHL shutout.

UP NEXT: It’s Navy Night Saturday at AOTW Arena as the Everett Silvertips take on the Seattle Thunderbirds at home for the final time this season. Tickets start at $17 and $5 from every ticket purchased will support local military efforts by the Navy Recruiting District Seattle First Class Petty Officers Association. Puck drop is 7:05 pm and doors open at 6:05 pm.

Everett controlled play for most of the first period as they outshot Tri-City 20-5 in the first twenty minutes. The only goal in the period came from Cole Fonstad, who put home a Bryce Kindopp pass to give Everett a 1-0 lead 15:29 into the first. Fonstad’s 15th of the season marks his second straight game with a goal and eighth game with at least one point. With Fonstad’s tally, it was the Tips ahead by one after twenty minutes.

It was an offensive explosion for the Silvertips in the second as Everett scored four goals in thirteen minutes. Brendan Lee got the Tips going with his eighth of the year 2:31 into the middle frame. Less than two minutes later, at the 4:27 mark, Bryce Kindopp scored on the powerplay to bring his season total up to 39 and Everett’s lead to three. It then turned into the Jake Christiansen show as he scored at 7:53 and 15:33 to put the Tips ahead 5-0 as we headed into the final twenty minutes.

Wyatte Wylie would get Everett’s final goal of the night with five seconds remaining to give the Silvertips a six-goal advantage as they finished off the Americans and beat Tri-City 6-0 to make it an 11-game winning streak. With tonight’s victory, Everett is now one point ahead of Portland for first in the US Division with 94 points as their next meeting with the Winterhawks is March 14th. Everett is tied with the Edmonton Oil Kings but is ahead of the Oil Kings in the league standings due to tiebreakers.

Everett swept the three stars of the game with Braden Holt getting the third star for his sixteen-save shutout performance. Bryce Kindopp took home second-star for his power play goal in the second period to make it 3-0 Everett. Finally, Jake Christiansen, who has eleven points in four games against the Americans this season, took home first star honours for his three-point night.

GAME NOTES: Scratched from tonight’s game were Hunter Campbell, Hunor Torzsok, Gianni Fairbrother, and Aidan Sutter… Tonight was Jake Christiansen’s seventh multi-goal game for Everett this season… Braden Holt secured his first career WHL shutout tonight and has just three goals against in his last three starts.,. With one goal tonight, Bryce Kindopp has 39 goals on the season and sits two back of Seth Jarvis for third in WHL goals and eight behind Adam  Beckham for the WHL lead.