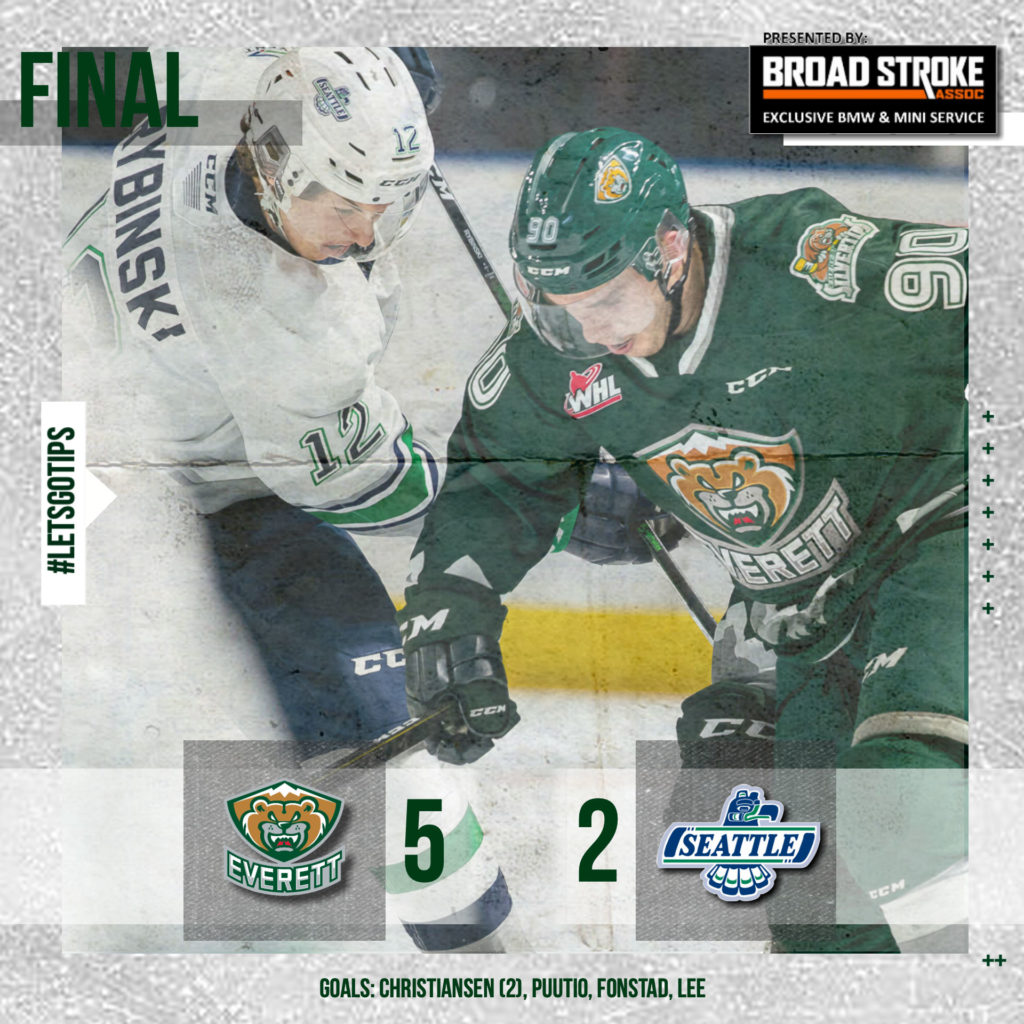 KENT, WA-  Jake Christiansen deposited two goals with four points, Dustin Wolf had 23 saves in net and the Everett Silvertips broke a tie game in the second period with three unanswered goals, enough to defeat the Seattle Thunderbirds 5-2 in front of 6,190 fans at the accesso ShoWare Center in Kent.

In the last three wins in the series, the Tips have outscored Seattle 15-2.

UP NEXT: Everett finishes their road trip with a swing east on 1-90 at Spokane Arena on Sunday against the Spokane Chiefs. Puck drop for that is 5:05 pm. The Tips will return to AOTW Arena on Friday, February 14th when they take on the Seattle Thunderbirds at 7:35 PM. Be sure to get tickets for it as it’s Union Solidarity Night and Valentine’s Day so tickets are going fast!

The first period came in hot as fans saw a little of everything. Both teams found the back of the net as Jake Christiansen started the scoring with a shorthanded goal 16:10 into the first, set up by Cole Fonstad. It was Christiansen’s second straight night with a goal as his 14th gave Everett an early lead. However, Seattle would tie it up twenty-eight seconds later with Jared Davidson getting the equalizer. Everett and Seattle finished the first twenty tied 1-1 and even in the shots department with ten apiece.

Things started unraveling in the middle frame as Everett began to take momentum. Just 5:55 into the second, Puutio made a beautiful move from the outside to the inside and sniped one past Blake Lyda to give Everett a 2-1 lead. Less than five minutes later, Cole Fonstad scored on the power play and gave the Silvertips a two-goal advantage on a snap shot over Lyda’s glove from the left circle at 10:40.

Brendan Lee decided that Everett needed some insurance as Fonstad sent Lee on a breakaway and faked forehand, roofed it backhand, and made it 4-1 Tips just 1:08 later. That’s how the second period would finish as Everett was twenty minutes away from another two points.

It was an even final period as both teams got nine shots on net. Wolf kept the three goal lead intact with a glove save on Andrej Kukuca, then went to the bench for rest, with a game ahead on Sunday, in favor of Braden Holt.

Seattle would cut their deficit to two on a Connor Roulette tally but that was it for the T-Birds at 15:45. Jake Christiansen would put home his second of the net on an empty-netter at 19:03, from nearly 200 feet away and sealed the deal on a 5-2 victory for the Silvertips. Christiansen finished the net with four points (two goals and two assists).

GAME NOTES: Scratched from tonight’s game were Dawson Butt, Michal Gut and Gianni Fairbrother… Christiansen’s four points were a single-game high this season as he now has 36 points in 24 games… Seattle native Brendan Lee scored his first goal since January 31st and his sixth goal of the season with his second-period score… With three points tonight, Cole Fonstad has registered at least one point in his last four games … Hunter Campbell dropped the gloves with Seattle’s Cade McNelly at 11:46 into the first, and did not return to the game.