TIPS WIN // Little Bit of Everything 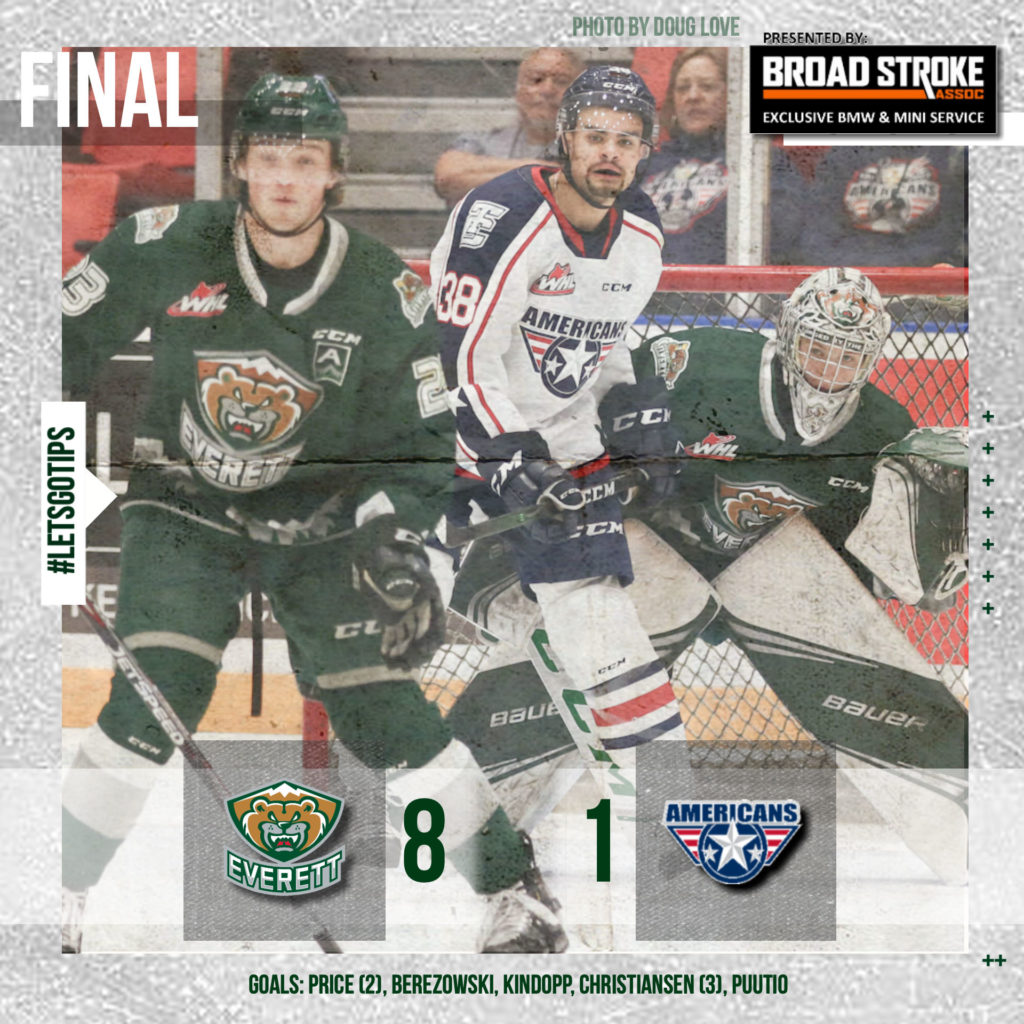 KENNEWICK, Wash. – Jake Christiansen earned his second career hat trick and Jalen Price scored a pair of goals as the Everett Silvertips wouldn’t look back, defeating the Tri-City Americans 8-1 in front of 2,656 at the Toyota Center on Wednesday. It’s Everett’s seventh straight win as the Tips are one point back of Portland for first place in the US Division with tonight’s victory.

UP NEXT: The Tips are on the road, taking on the Kelowna Rockets on Friday before returning home for a meeting with Kelowna on Saturday, February 29th. The game time is 7:05 pm for that one as doors open at 6:05 pm. It’s the final Chick-Fil-A Fan 4 Pack of the season so get your tickets today!

Price’s goal at 4:11 was one of two first-period tallies for Everett as Jackson Berezowski scored his 17th goal of the season at 10:39 on a deflection off goaltender Mason Dunsford. The Americans would get their first goal of the night with just three seconds before the end of the period as Booker Daniel roofed one past Braden Holt to make it a 2-1 at the end of 20 minutes. Everett outshot Tri-City 15-4 in the first and that momentum continued in the second.

In the middle period, Bryce Kindopp scored his 36th goal of the season to give Everett a 3-1 lead, finishing Ethan Regnier’s feed from the left circle. Kindopp’s goal marks his third straight game with a goal and ties him with Portland forward Seth Jarvis for third in goals in the WHL. Later on, Jake Christiansen would get his first of the night on a snapper from the right circle at 15:27 to make it a 4-1 lead for Everett after forty minutes. Braden Holt stopped all six of Tri-City’s shots in the second to keep the Americans off the scoresheet.

Then, just 1:10 into the third, Kasper Puutio scored on a center point bomb – on the power play – to make it a 5-1 Tips margin. Puttio’s goal was third in four games as he now has four goals and seven points in 15 games since being traded to Everett. Jake Christiansen followed Puutio’s goal up with a power play goal of his own five minutes later, a one timer from the right point, making it 6-1 Everett at 15:27. The scoring progressed with Jalen Price getting his second of the night for his first career two-goal game to give the Silvertips a 7-1 advantage before Jake Christiansen finished the night with his hat-trick.

Jake Christiansen took home the first-star for his hat trick, along with an assist of Jalen Price’s second goal. Kasper Puutio would get the second-star as he finished with a goal and an assist. Rounding out the three stars was Jalen Price for his two-goal night and he now has twelve points this season, two more than all of last year.

GAME NOTES: Scratched from tonight’s game were Hunter Campbell, Gianni Fairbrother, Olen Zellweger, and Aidan Sutter… the Tips improved to 5-1 this season over Tri-City … Christiansen took over the WHL lead in goal scoring among defensemen, surpassing Alex Cotton of Lethbridge … he also set a new single season franchise record for most goals by a defenseman in one season, surpassing Landon Oslanski’s 17 goals in 2012-13.