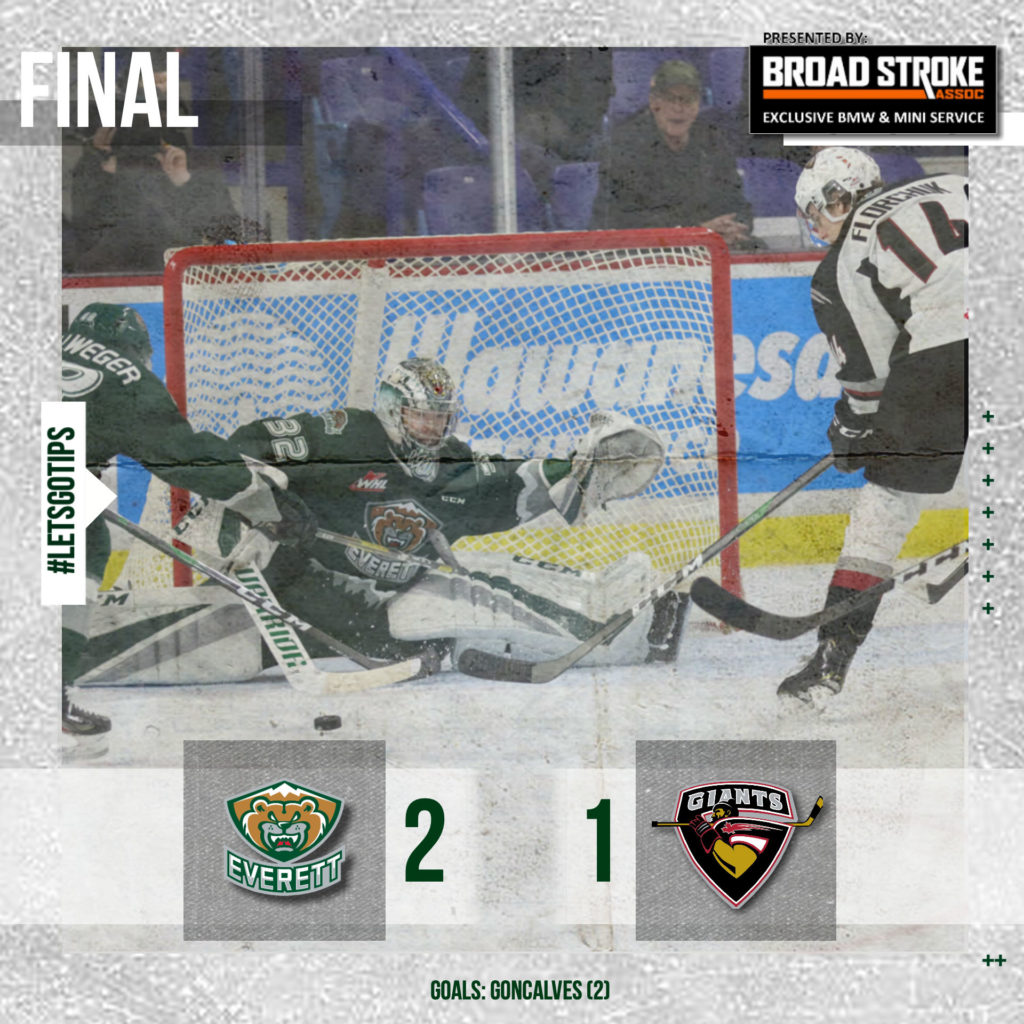 LANGLEY, British Columbia – Dustin Wolf turned away 27 shots and didn’t allow a goal for the final 54 minutes, and Gage Goncalves buried two goals to help lift the Everett Silvertips to a 2-1 victory over the Vancouver Giants on Thursday at Langley Events Centre in WHL aciton.

The Tips seized five points on their three game road swing (2-0-1) and have gone unbeaten in regulation in the last five games (4-0-1).

UP NEXT: Everett returns to AOTW Arena Sunday, January 26, for a matchup with the Spokane Chiefs on Hat Giveaway Night presented by Buzz In Steakhouse. Puck drop is 4:05pm.

Alex Kannok-Leipert put the Giants up 1-0 on his third goal of the season at 5:57, parking a seemingly impossible angle shot under the crossbar on Dustin Wolf.

The Tips goaltender wouldn’t allow another goal for the rest of the night.

Gage Goncalves stuffed a rebound, blocker side on David Tendeck at 11:56 of the first period after Goncalves won a face-off, drew the puck back to Ty Kolle, then hunted the rebound after Kolle placed a low shot off the pads of Tendeck.

The Tips were dominant in first period puck possession and outshot Vancouver, 22-6 for the most shots they’ve fired in one period.

Wolf and Tendeck traded saves in the cagey second period where Vancouver outshot the Tips, 8-7. Still, Wolf came through on several key saves while the defense continued to contain Bowen Byram, the first round draft pick of the Colorado Avalanche, was limited to three shots on net all game.

Tendeck then dislodged the net, ruled intentional early in the third period, and the Tips captailized on the ensuing power play. Jake Christiansen teed up a blast from the high slot that deflected off Goncalves for his second goal of the game and a 2-1 lead, 1:44 into the final period.

From there, the Tips kept Vancouver at bay. Wolf turned in his biggest save of the game on Justin Sourdif with two minutes left from point blank range, and then snuffed out one last Vancouver surge at the net in the final ten seconds to preserve the victory.

Tendeck took the loss with 29 saves.