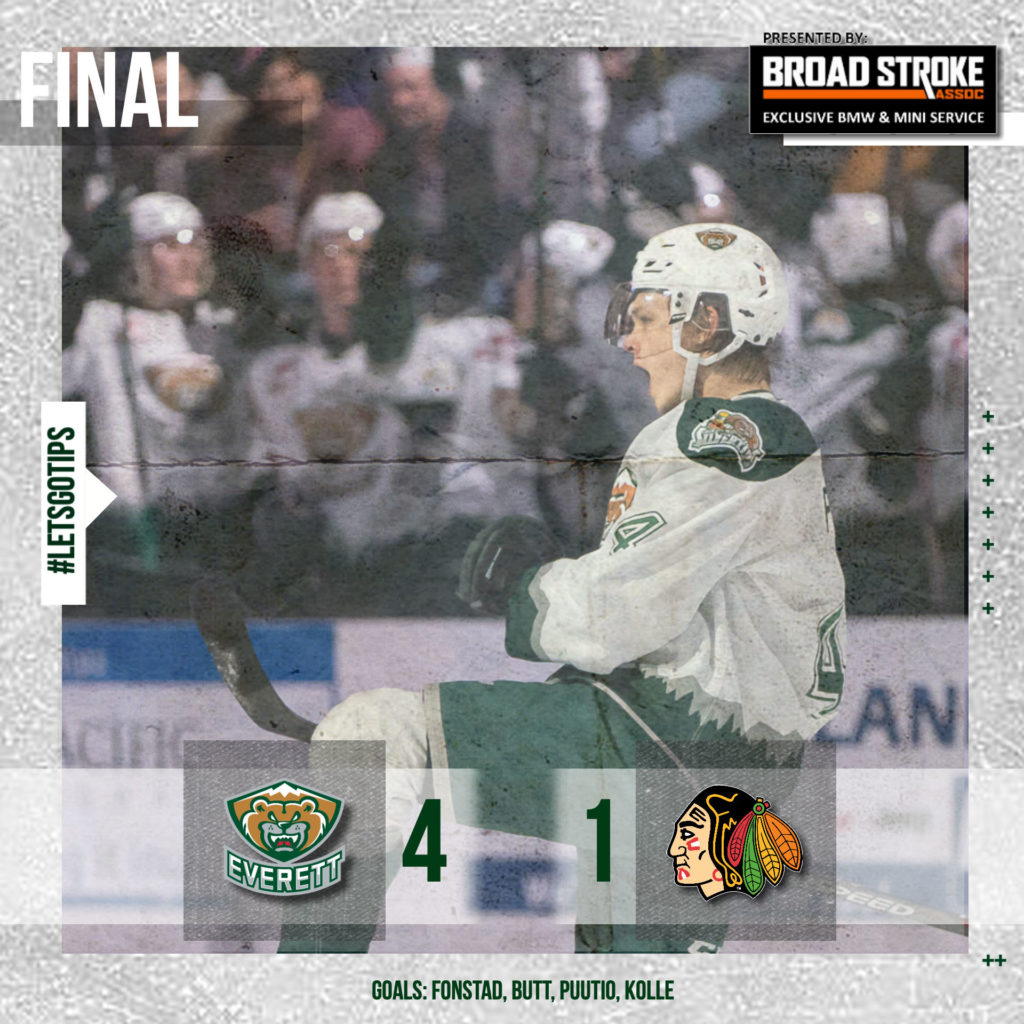 EVERETT, WA- Coming into a crucial match with the Portland Winterhawks, the Everett Silvertips very well knew what was a stake. A win over Portland would put Everett’s winning streak at ten and propel the Silvertips into first place in the US Division. With 6,633 loud fans roaring on the Silvertips and a big night from Dustin Wolf, who made 38 saves, Everett took down Portland 4-1 for a pivotal win over their US Division rivals.

Cole Fonstad, Dawson Butt, Kasper Puutio and Ty Kolle (multi point game) notched the goal scoring for the Silvertips, who won their fourth in a row over Portland and tied Edmonton for the top record in points, in the WHL with eight games remaining. The Tips reduced their magic number to four points to clinch home ice advantage in the opening round of the WHL Playoffs, going 2-of-2 on the power play for the day.

UP NEXT: Everett is back home for a meeting with the Tri-City Americans Friday, March 7 with puck drop at 7:05 pm. It’s Hockey Happy Hour on Friday as fans can save up to $15 when they purchase a ticket/drink combo so get yours while they last!

Cole Fonstad started the scoring as he put home the first goal at 7:39 in the opening frame. Fonstad’s power play score was his 14th of the season and his first since February 8th. Adding to the scoring was Dawson Butt, who gave Everett a 2-0 lead at the 16:43 mark of the first. Butt, with assists from Justyn Gurney and Gage Goncalves, had the Silvertips rolling as Everett took a two-goal lead heading into the second period.

Portland would get on the board in the second as Jake Gricius cut the Silvertips lead to just at 13:33 of the first. Everett would have an answer as Ty Kolle hopped out of the penalty box to put one past Joel Hofer and make it 4-1 Everett at 19:16 in the second. Kolle’s 20th of the season came with a helper from Olen Zellweger, as Dustin Wolf would make 13 saves in the period to give the Tips a three-goal advantage heading into the frame.

The third period was all Dustin Wolf as he stopped all 16 of Portland’s shots to secure a 4-1 victory for the Silvertips at AOTW Arena. With the win, Everett now has four straight wins over Portland and the outright lead for the US Division. Everett will meet Portland once more this season as the two teams clash on March 14th at the Moda Center in Portland.

Dustin Wolf took home first-place honors with 38 saves on 39 Portland shots as his win streak is now up to eight. With one goal and one assist, Ty Kolle was named the second star of the night. Rounding out the three stars on Sunday was Kasper Puutio, who’s power play goal in the second help give Everett extra insurance to help close out the victory.

GAME NOTES: Scratched from tonight’s game were Hunter Campbell, Hunor Torzsok, Dylan Anderson, and Gianni Fairbrother… In their last four wins against Portland, the Silvertips have outscored the Winterhawks 18-7… With his first goal, Ty Kolle got in the goal column for the first time since February 19th… Since coming to the Silvertips, Kasper Puutio has three points in three against the Winterhawks.