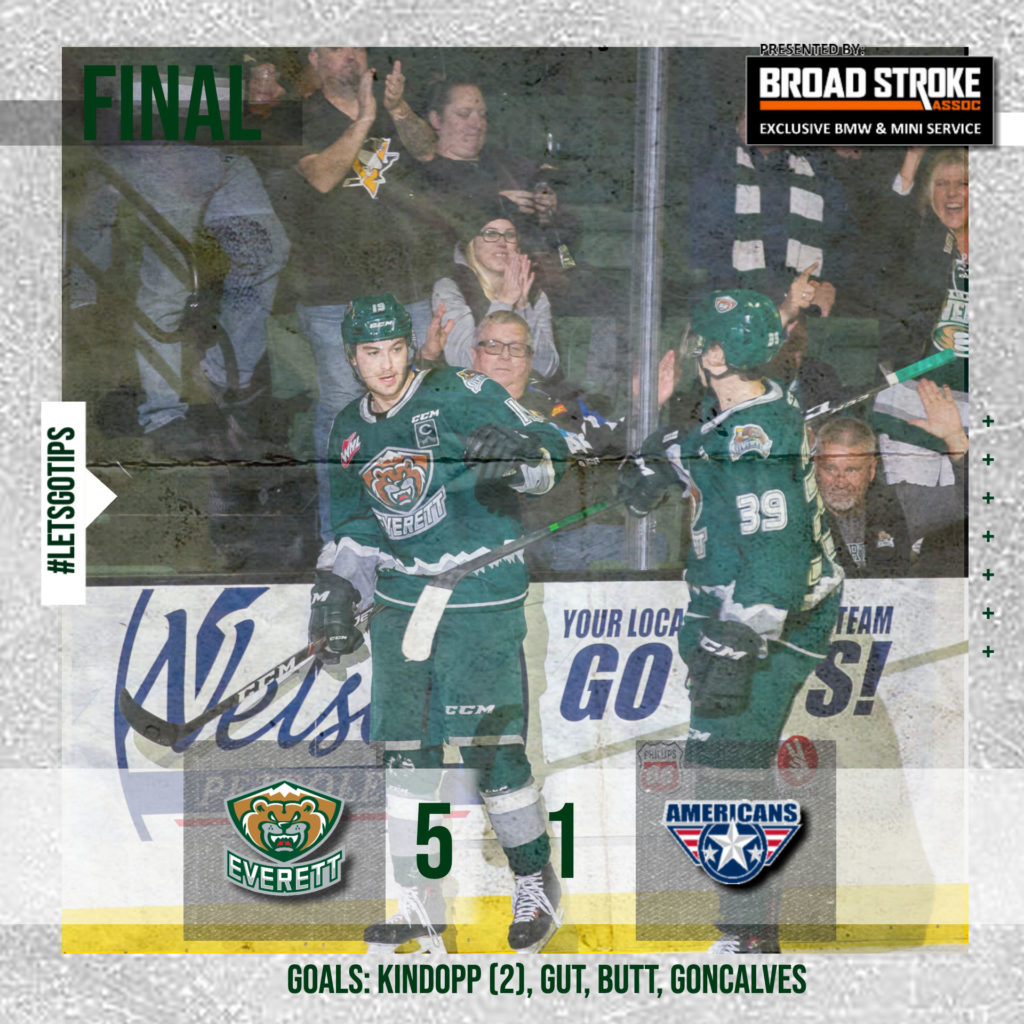 EVERETT, Wash. – Dustin Wolf made 23 saves and Bryce Kindopp sandwiched the goal scoring with a two-goal effort, helping the Everett Silvertips cruise past the Tri-City Americans in a 5-1 victory before 3,859 fans at Angel of the Winds Arena in downtown Everett on Friday in WHL action.

The Silvertips won for the sixth time in seven games, improving to 3-1 on a five-game homestand. Michal Gut scored the game winner and Cole Fonstad earned his fifth straight multi point game with two assists, totaling five points (1g-4a) since joining the Tips lineup after a trade from Prince Albert on Sunday.

UP NEXT: The Tips conclude the homestand on tomorrow at 7:05 p.m. (KRKO / WHL Live) against the Prince Albert Raiders at Angel of the Winds Arena. Tickets are on sale at the link below with doors opening at 6:00 p.m., and the first 3,000 fans in attendance will receive a free Chick-fil-A gift card, redeemable for a free chicken sandwich or nuggets. One lucky fan in attendance will be selected to win free Chick-fil-A for a year.

Kindopp opened the scoring on a power play goal, depositing a rebound at the left post with 6:58 left in the first period after Cole Fonstad delivered his first of two assists in the game. Just 1:16 later, Michal Gut re-directed a Jackson Berezowski feed off the rush past Beck Warm’s blocker to lift the Tips to a 2-0 lead.

Wolf came up with a huge glove save on Sasha Mutala in the second period to maintain the lead, and the Tips followed by cashing in with a two-on-none opportunity. Max Patterson, fresh off a stolen puck, found Dawson Butt driving the net and fed a tape-to-tape pass. Butt turned a backhander past Warm for a 3-0 advantage and his first goal of the season with 8:03 left in the second period.

Sasha Mutala’s fifth goal of the year, a snap shot through traffic from the blueline, got Tri-City on the board at 14:12. But the Tips responded in the third period on Gage Goncalves’ loose puck opportunity at 9:30, at the left post for a 4-1 lead.

Bryce Kindopp sealed the game with an empty netter, with 3:08 left in regulation to seal the victory.

MORE ON THE 3 STARS: 1) Dustin Wolf had another stellar performance in net and gets a big 23 save win for the Tips. The Tips were on the penalty kill 4 times this evening and Wolf was essential in killing all four penalties. The second period: a bit rocky and the Americans controlled much of the play but Wolf looked solid in net and was able to make several rather difficult saves. Americans are rather deadly on the power play and Wolf stood on his head.

2) Jacob Wright had a great night this evening as he set up the game winner and insurance goals. It was a special game for him this evening as it was his first career multi-point night. He did very well on the second and third lines tonight and was able to match his play up effectively with his line mates. His fast footing was essential in starting the plays for both goals.
3) Michal Gut has had a very good season thus far with the Tips and tonight was no different. Gut managed to score the game winner this evening and it was his second goal of the year, sixth point of the season. This is Gut’s first season in the WHL and is already making himself a household name with the Silvertips early this season.

NOTES: Scratched from the lineup were Braden Holt, Martin Fasko-Rudas, Aiden Sutter, and Conrad Mitchell … Goncalves has now scored a goal in three straight games …. The Tips outshot Tri-City, 33-24 and won the battle at the face-off circle, 30-24 … Kindopp, the league’s leader in goals, became the first player this season to hit the double digit goal plateau … head coach Dennis Williams moved to within three wins of 100 in his WHL coaching career.