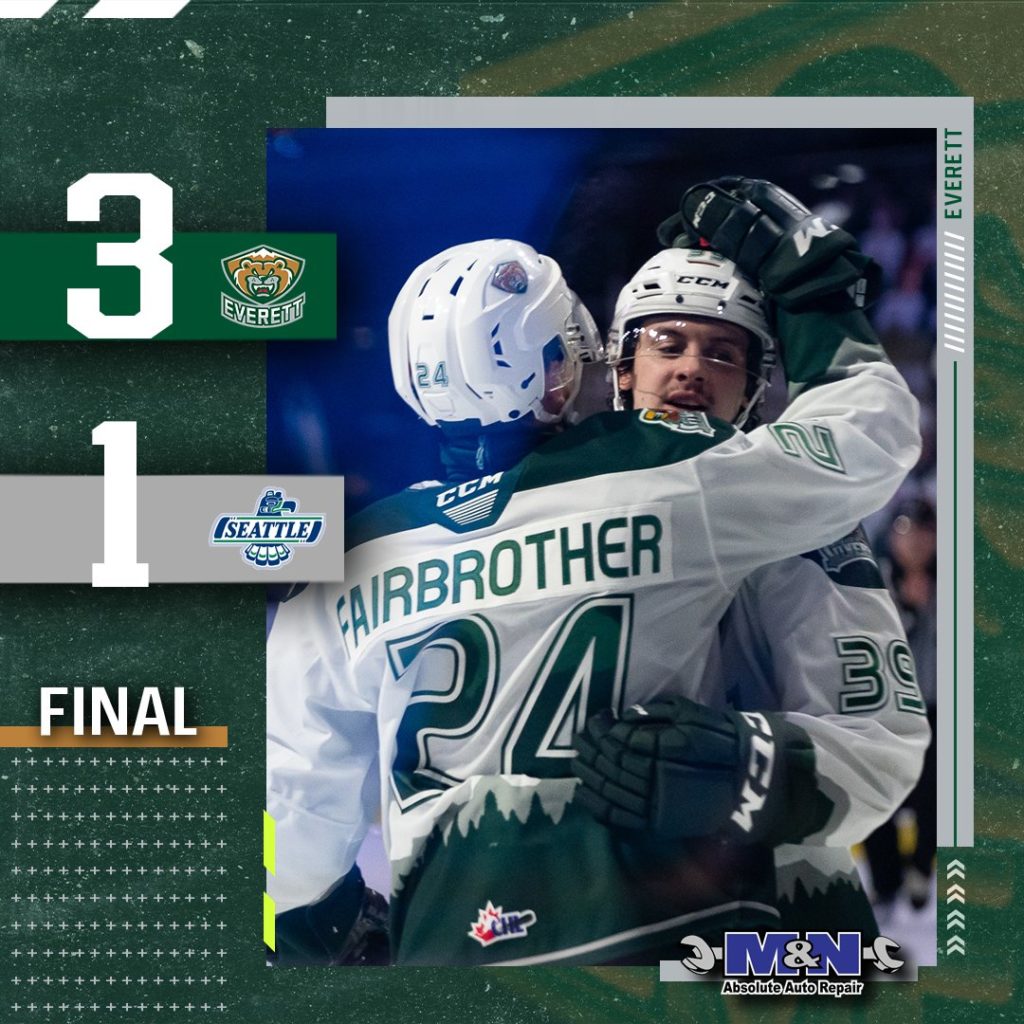 EVERETT, Wash.– Cole Fonstad’s multi point game, Jacob Wright’s eventual game winner early in the third period and Dustin Wolf’s 19 saves – many of them as challenging stops – were enough to lift the Everett Silvertips to a 3-1 victory over the Seattle Thunderbirds on Friday in WHL action at Angel of the Winds Arena.

The Silvertips earned their sixth win in the first seven games while delivering payback after dropping the head-to-head series opener Wednesday in Kent, while improving to 4-0 at home this season. The Tips overcame a 1-0 deficit after 20 minutes, scoring three unanswered goals for the victory.

UP NEXT: The Silvertips continue their three-game homestand tomorrow, 6:05 p.m. (KRKO/WHL Live) in downtown Everett against the visiting Portland Winterhawks. Viewing packages remain on sale at watch.chl.ca. Play-by-play “Voice of the Tips” Mike Benton will have pre-game coverage beginning at 5:30 p.m.

Payton Mount staked the Thunderbirds to a 1-0 lead on his power play goal from the base of the right circle at 6:27 of the first period and the Silvertips outshot Seattle 12-6, but Thomas Milic turned away every opportunity. Wolf was just as sharp in the second period by turning away a grade-A look from Jared Davidson, and Ty Gibson nearly tied the game on a blast from the right point that deflected off the post.

The Silvertips then tied the game on a power play at 8:11. Cole Fonstad threaded a pass through the box to Gianni Fairbrother, stationed at the right circle, who then beat Milic with a wrist shot for his first goal of the season.

Wolf kept the tie intact late in the period when he stopped a shorthanded breakaway against Henrik Rybinski.

The Tips then scored just 49 seconds into the third period while the net became dislodged behind Wolf, knocked off by Seattle’s Reid Schaefer. With play legally allowed to continue, Gage Goncalves fed a tape-to-tape pass to Jacob Wright, burying a wrister upstairs on Milic for the lead.

Fonstad sealed the game with an empty net goal, 1:19 remaining in the game.

Milic took the loss in net despite making 25 saves.

GAME NOTES: Silvertips scratches included Aidan Sutter, Brady Van Herk, Brendan Hunchak, and Evan May … the Tips outshot Seattle 28-20 … Fonstad leads the Silvertips with 12 points in 7 games … Wolf’s win marked the 61st time over three-plus seasons he has allowed a goal or less in a game … Fairbrother leads all club defensemen with 8 points in 7 games.