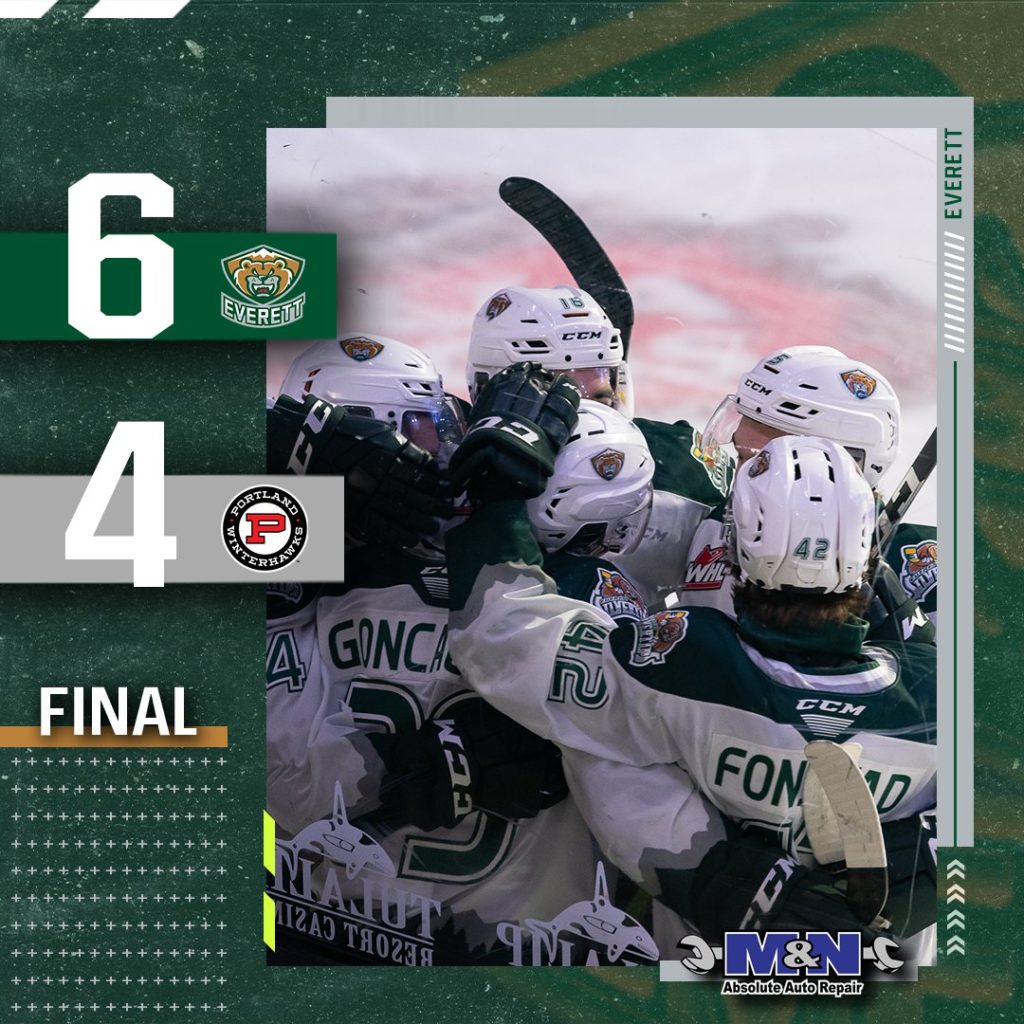 EVERETT, Wash.– Ben Hemmerling’s one-timer stood as his first career game-winning goal while Gage Goncalves earned a three-point night to help rescue the Everett Silvertips in a thrilling 6-4 comeback victory over the Portland Winterhawks in WHL action in downtown Everett on Tuesday.

The Tips, who rallied from three separate two-goal deficits to improve to 6-0 on home ice, scored four unanswered goals to seal their eighth victory in the first nine games (8-1, 16 points). The Tips went 2-of-3 on the power play while Gianni Fairbrother earned two assists, and 12 different players earned at least a point.

UP NEXT: The Silvertips face back-to-back road games and will play on the road for five times in the next seven games, starting Friday at 5:05 p.m. in a showdown against the Seattle Thunderbirds (KRKO/WHL Live). Viewing packages remain on sale at watch.chl.ca. Play-by-play “Voice of the Tips” Mike Benton will have pre-game coverage beginning at 6:30 p.m.

Jaydon Dureau finished a two-on-one from Seth Jarvis to start the scoring just 64 seconds into the game and then at 1:38, Reece Newkirk slipped a low shot through heavy traffic to stake Portland to an early 2-0 cushion. The Tips cut the deficit to a goal on Goncalves’ sixth goal of the season, a rebound at the left circle at 7:19.  Simon Knak then set up Mason Mannek on a post-to-post set up for a 3-1 edge with 5:24 left in the period, but the game was just warming up.

Cole Fonstad used his speed to break to the Portland net off the rush and beat Dante Giannuzzi with a backhand deke at 5:32 of the second period, drawing the Tips to within a goal. But Seth Jarvis’ shorthanded goal from the right circle put the Winterhawks up again by two goals at 9:29.

The Tips again cut the deficit to 4-3, on Jacob Wright’s power play deflection at the net stemming from Gianni Fairbrother’s feed from the right circle with 3:54 left. The Tips outshot Portland 13-6 in the final period and created several good looks in the first few minutes, but were unable to finish on Giannuzzi. Their fortunes changed after a penalty kill, and then embarking on a power play after Ryan McCleary’s interference penalty.

Hunter Campbell cashed in for a 4-4 tie. On the power play, the Silvertips generated a point shot through traffic that Campbell jumped on for a rebound and his fourth goal of the year with 5:11 remaining. Then with 3:08 left, Goncalves threaded a perfect tape-to-tape pass to Ben Hemmerling, who blasted a one-timer past Giannuzzi from the top of the left circle for the Tips first lead of the night at 5-4.

Jackson Berezowski sealed the game on an empty netter with 36 seconds left.

Giannuzzi made 28 saves for the loss in net.

GAME NOTES: Silvertips scratches included Brendan Hunchak, Brady Van Herk, Ty Gibson, and Evan May … the Tips have won seven straight games over the Winterhawks and have scored four goals or more in six of those wins … Gage Goncalves has five points in the last three games.