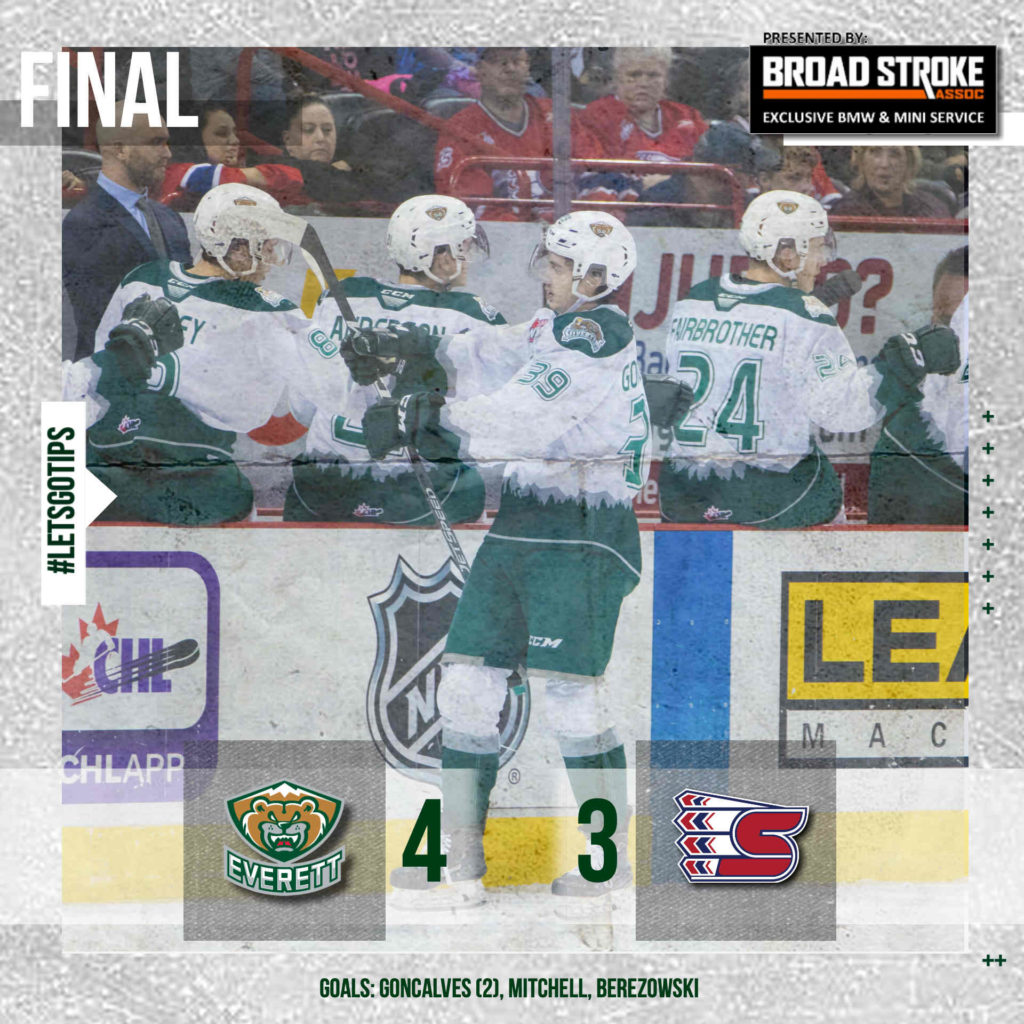 SPOKANE, Wash. – Gage Goncalves scored twice and Dustin Wolf’s 34 saves were enough to lift the Everett Silvertips to a 4-3 victory over the Spokane Chiefs before 4,818 fans on Friday night in WHL action at Spokane Arena.

The Silvertips won for the sixth straight game on the road and have won eight of the last nine games, powered by a special teams unit that went 2-of-5 in the game and are now 4-of-9 against the Chiefs, head-to-head this season. The Tips also won for the 8th time in the last 11 meetings with Spokane.

UP NEXT: The Tips finish the road swing tomorrow at accesso ShoWare Center in Kent for a 6:05pm puck drop against the Seattle Thunderbirds (KRKO / WHL Live / Tips App). Their next home game is Nov. 16 against the Winnipeg ICE, 7:05 p.m. in downtown Everett. Tickets remain on sale, including the Chick-fil-A Fan 4 Pack, offering 4 tickets and sandwiches for as low as $56.

Goncalves kick started the Tips offense at 2:01 of the first period on a power play goal, when Martin Fasko-Rudas whipped a pass out of a scrum along the left boards and found Goncalves open in the slot for a snap shot. Filip Kral tied the game on a blast through traffic at 8:12 of the first period, but Goncalves and the Tips responded for a 2-1 lead at 14:11.

Off a turnover, Cole Fonstad found Goncalves, tape-to-tape, in the slot again for a snap shot past Campbell Arnold.

Dustin Wolf turned in a key save on Luke Toporowski early in the second period to keep the Tips ahead, and Conrad Mitchell followed up with his first goal of the season to extend the Silvertips lead. Mitchell cleared the Silvertips zone and a loose puck at center ice was tracked by Dawson Butt. He slid a pass head to the left circle, and Mitchell settled it flat before uncorking a snap shot past Arnold for a 3-1 lead with 4:24 left.

Jackson Berezowski’s rebound power play goal put the Tips ahead at an insurmountable 4-1 lead at 3:18 of the third period and the Tips held despite two late strikes by Spokane, both with an extra attacker: Adam Beckman cut the lead to two goals at 18:12 with a snap shot under the crossbar, and Eli Zummack’s cross-ice finish at 18:41 from the right circle.

Arnold took the loss with 22 saves.

NOTES: Scratched from the lineup were Braden Holt (healthy), Brendan Lee (healthy), Tyson Phare (injury),  and Olen Zellweger (World U17 Hockey Challenge) … the Tips moved to 10-0 in one-goal games this season … Fonstad returned to the lineup after missing four straight games and has seven points in four games in a Silvertips uniform.