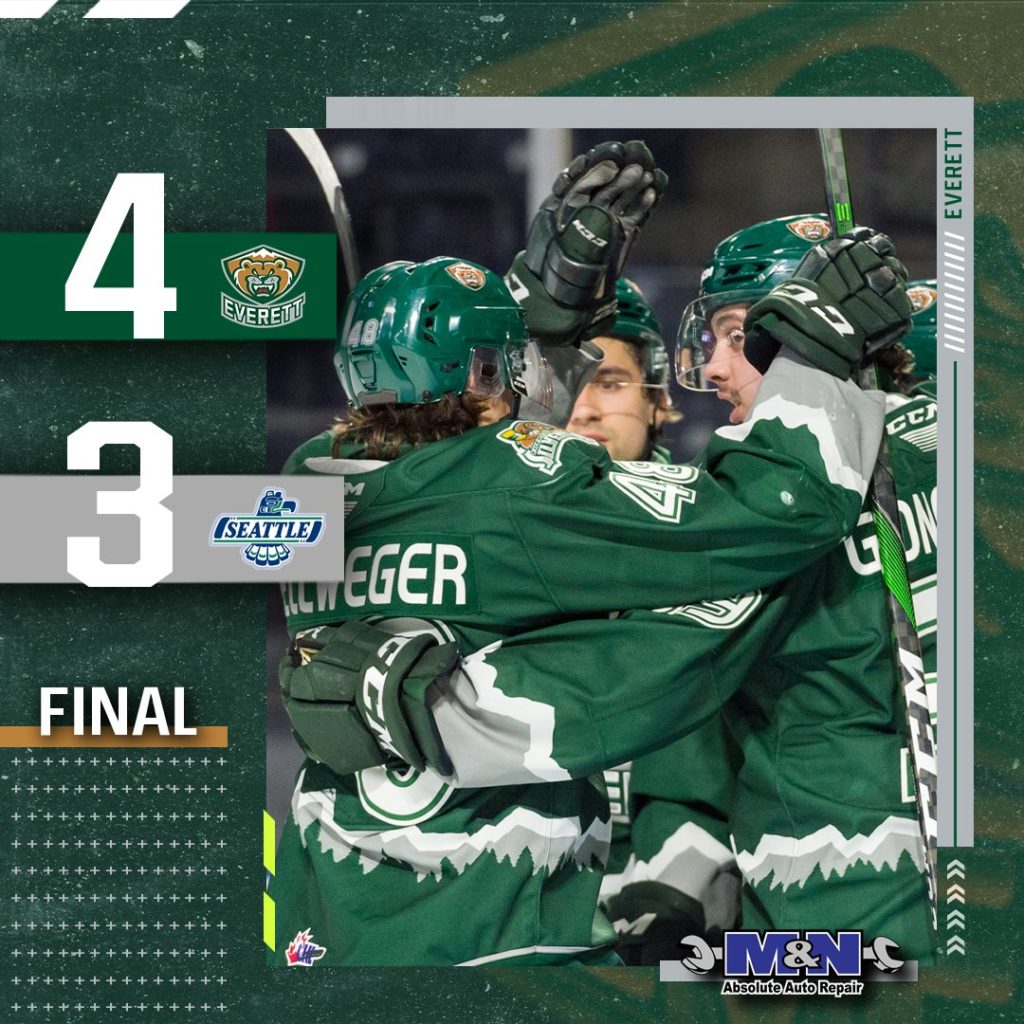 KENT, Wash.– Gage Goncalves snapped a tie game with 1:36 left in regulation to help the Everett Silvertips defeat the Seattle Thunderbirds, 4-3 in the third meeting of the season, Friday night in WHL action at accesso ShoWare Center.

The Silvertips staved off a third period rally by the Thunderbirds for their ninth win in ten games, extending their lead to eight points for first place in the U.S. Division with 14 games remaining after Spokane defeated Portland, 3-1. Jackson Berezowski, Brendan Lee, and Cole Fonstad each collected a goal for the Tips while Olen Zellweger dished two assists from the blueline, including the primary helper on Goncalves’ clutch game winner.

The Tips improved to 2-1 in the head-to-head series.

UP NEXT: The Silvertips return to play on Saturday to complete a stretch of back-to-back road games at 6:05 p.m. against the host Tri-City Americans (KRKO/WHL Live) at Toyota Center. Viewing packages remain on sale at watch.chl.ca. Play-by-play “Voice of the Tips” Mike Benton will have pre-game coverage beginning at 6:30 p.m.

Berezowski slammed Goncalves’ backdoor feed at the left post for a power play goal and a 1-0 lead at 10:33 of the first period and the Tips used the fast start for the one goal lead after 20 minutes. But Jeri-Leon tied the game on a snapshot from the right circle just 1:19 into the second period.

The Silvertips pushed back quickly. Brendan Lee wired a wrist shot past Thomas Milic for the Tips’ second power play goal of the night at 5:05, finishing Gianni Fairbrother’s tape-to-tape, cross-ice pass through the penalty kill scheme. Fonstad then jumped on a loose puck at the Seattle blueline and uncorked a wrist shot from the same spot where Lee scored, 7:16 into the period for a 3-1 cushion.

The third period wasn’t without uncertainly, eventually overcome on Goncalves’ goal. Conner Roulette snuck his sixth goal of the season past Dustin Wolf’s right pad at 11:46 to cut the deficit to 3-2, and Jeri-Leon tied the game on his second goal of the night, a rebound between the circles, with 5:18 left.

Goncalves went to the front of the net to set up the game winning goal with less than two minutes left in regulation. Jacob Wright won a battle behind the net and zipped a pass to Zellweger at the right point. Zellweger walked the blueline, waited for traffic to assemble at the net, then fired a shot that deflected off Goncalves for a 4-3 lead with 1:36 remaining.

Seattle immediately pulled Milic for an extra attacker but never mounted a serious threat, and the Tips closed out their fourth straight win.

Wolf earned the win in net with 30 stops while Milic’s loss included 29 saves.