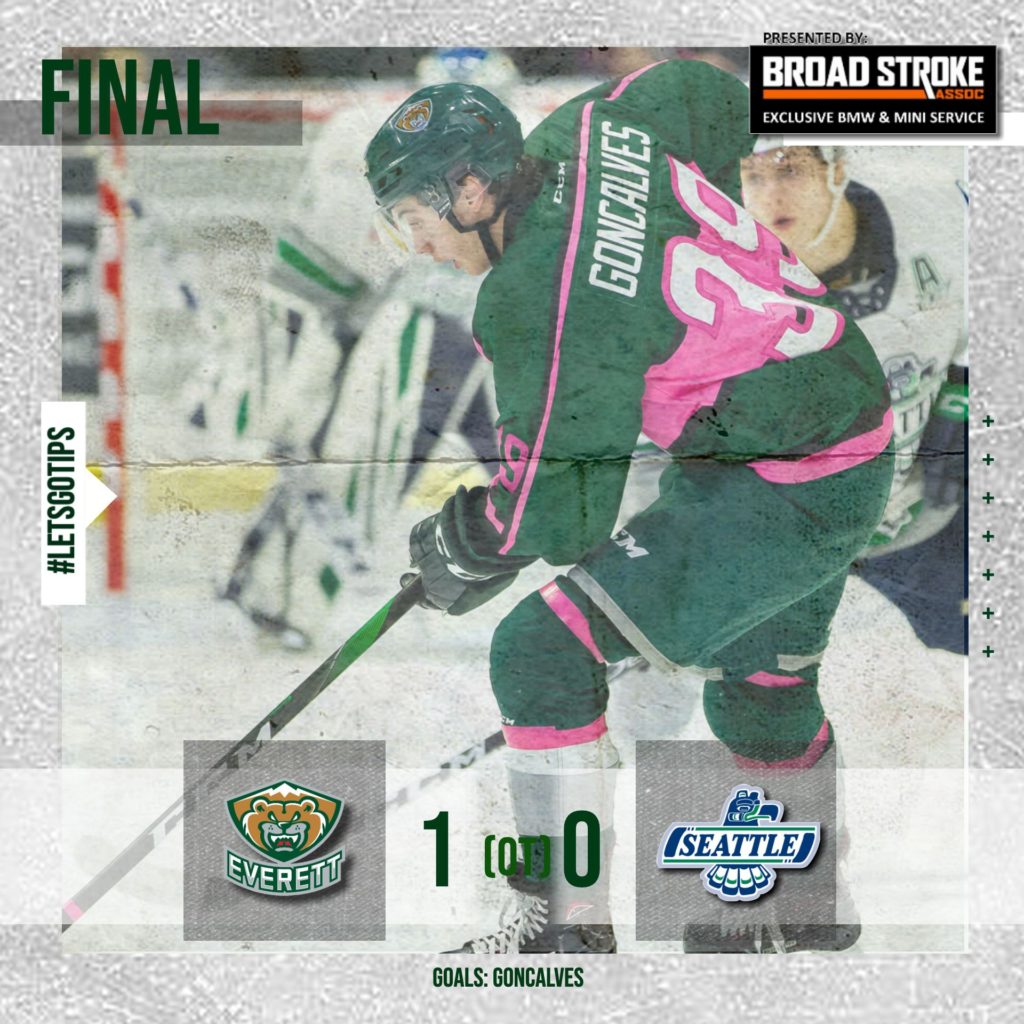 EVERETT, Wash. – Gage Goncalves’ steal and breakaway goal at 2:21 ended a thriller in downtown Everett as the Everett Silvertips defeated the Seattle Thunderbirds, 1-0 in sudden death overtime before a sellout crowd of 8,256 at Angel of the Winds Arena on Saturday in WHL action.

The Tips, drawing their largest crowd for Pink The Rink in seven years, staged the game as a fundraising initiative to support breast cancer prevention and treatment measures in Snohomish County, had Dustin Wolf earn his 13th career shutout on 35 saves while the Tips extended a regular season home shutout streak of Seattle to 127:21.

The Tips won an incredibly close game in overtime this evening as the game was scoreless through 60 minutes.

Wolf’s shutout moved him to 3rd place on the Tips all-time shutout list, past Michael Wall.

UP NEXT: The Tips resume the homestand on Wednesday, Oct. 16 at 7:05 p.m. (KRKO / WHL Live) against the Brandon Wheat Kings in the only matchup of the season. Tickets are on sale at the link below with doors opening at 6:00 p.m.

A story for the evening was a set of incredible saves from both Dustin Wolf and Roddy Ross. Both were faced with a lot of tough shots and quick rebounds, with Wolf delivering rapid fire butterfly saves. Ross, in turn, earned a set of big saves and was beat on a tough shot in overtime. The Tips were outshot 10-6 in the first period when Reece Vitelli nearly put them ahead, but hit the right goal post on goaltender Roddy Ross (24 saves). Wolf earned a big save on a Payton Mount one-timer at the right circle, among the 10 stops he had in the opening frame.

The second period continued the scoreless trend and the Silvertips penalty kill blanked Seattle twice, and Wolf turned in 12 saves.

Both teams elevated the intensity in the third period and the Tips made their move after the ten minute mark. Max Patterson nearly put them ahead but Ross turned in a diving glove save to stop a rebound attempt off the backboards, and Wolf and the defense maneuvered a goal line stand in the final minute of regulation.

In overtime, Goncalves and counterpart Owen Williams met at the right boards and Goncalves laid into Williams with a crushing hit, dislodging the puck. Gage Goncalves went in all alone from the left circle and roofed it past Roddy Ross for the lone goal of the evening, giving the Tips a big win against one of their biggest rivals.

NOTES: Scratched from the lineup were Braden Holt, Martin Fasko-Rudas, Jack Lambert, Tyson Phare, and Conrad Mitchell … the last three regular season meetings between the Tips and Thunderbirds have gone to overtime in downtown Everett … Goncalves’ winner came on his return to the lineup after missing three games due to injury.