TIPS WIN // Ripping Away in the Rose Quarter 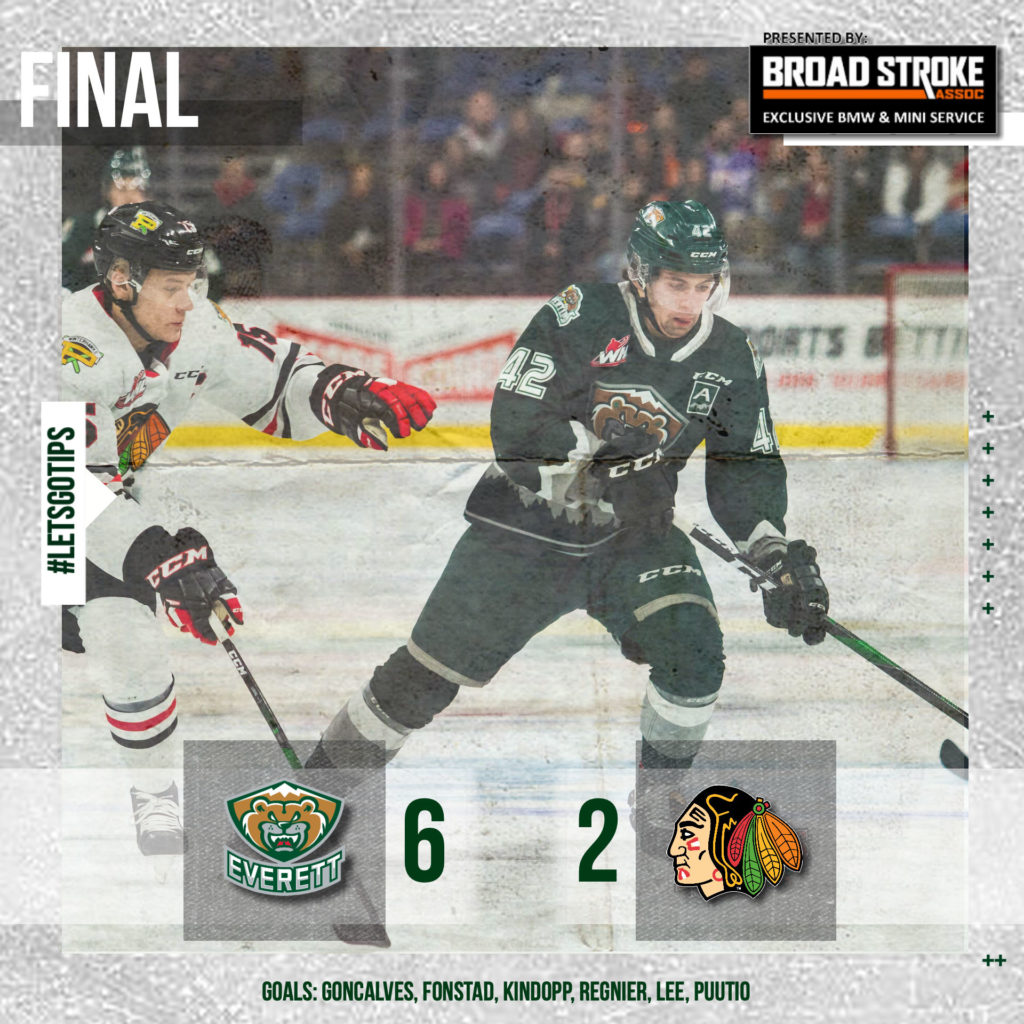 PORTLAND – Two of the WHL heavyweights went head to head on Sunday night as the Everett Silvertips travelled to the Rose Quarter for a battle with the Portland Winterhawks. Facing off in front of 5,360 people at Veterans Memorial Coliseum, the Silvertips cruised past the Winterhawks 6-2 to move three points behind Portland for first in the US Division. It’s also Everett’s sixth straight win and third consecutive victory against Portland.

UP NEXT: The Tips are on the road with trips to Kennewick on Wednesday (7:05 p.m.) and Kelowna on Friday. Everett returns home for a meeting with the 2020 Memorial Cup hosts, Kelowna Rockets, on Saturday, February 29th. The game time is 7:05 pm for that one as doors open at 6:05 pm.

Everett got on the board in a hurry as Gage Goncalves scored just twenty-five seconds into the opening period. It was the 30th goal of the season for Goncalves as the Mission, BC native has twelve points in his last nine games. Later on in the period, Cole Fonstad put home a loose puck past Portland netminder Joel Hofer on the power play to make in a 2-0 Silvertips lead. Less than three minutes later, Bryce Kindopp scored his 35th goal of the year to make it 3-0 Everett and that’s how the first period would finish.

The scoring continued for Everett in the second period as Ethan Regnier got his second goal in three games. Regnier snuck a rebound shorthanded through the pads of Hofer on a Gage Goncalves breakaway and Everett found themselves with a 4-0 lead after forty minutes. Dustin Wolf had an excellent two periods for Everett as he stopped all 22 of Portland’s shots heading into the final frame.

The action picked up in the third as Kishaun Gervais scored at the 5:34 mark and cut Portland’s deficit to three goals. Everett continued to step on the throttle as Brendan Lee got his seventh goal of the season with a little over ten minutes to go. Kasper Puutio scored on the power play two minutes later to give Everett a 6-1 edge as the Tips looked to run close out the game. Johnny Ludvig would get one more goal for Portland but it was too little, too late for the Winterhawks as Everett defeated Portland 6-2 in a battle of I-5 rivals.

GAME NOTES: Scratched from tonight’s game were Hunter Campbell, Gianni Fairbrother, and Aidan Sutter… With his win tonight, Dustin Wolf has now got wins in his last four starts and has given up just one goal or less in those games… In his last two games against Vancouver, Gage Goncalves has scored the game-winning goal in both of them.