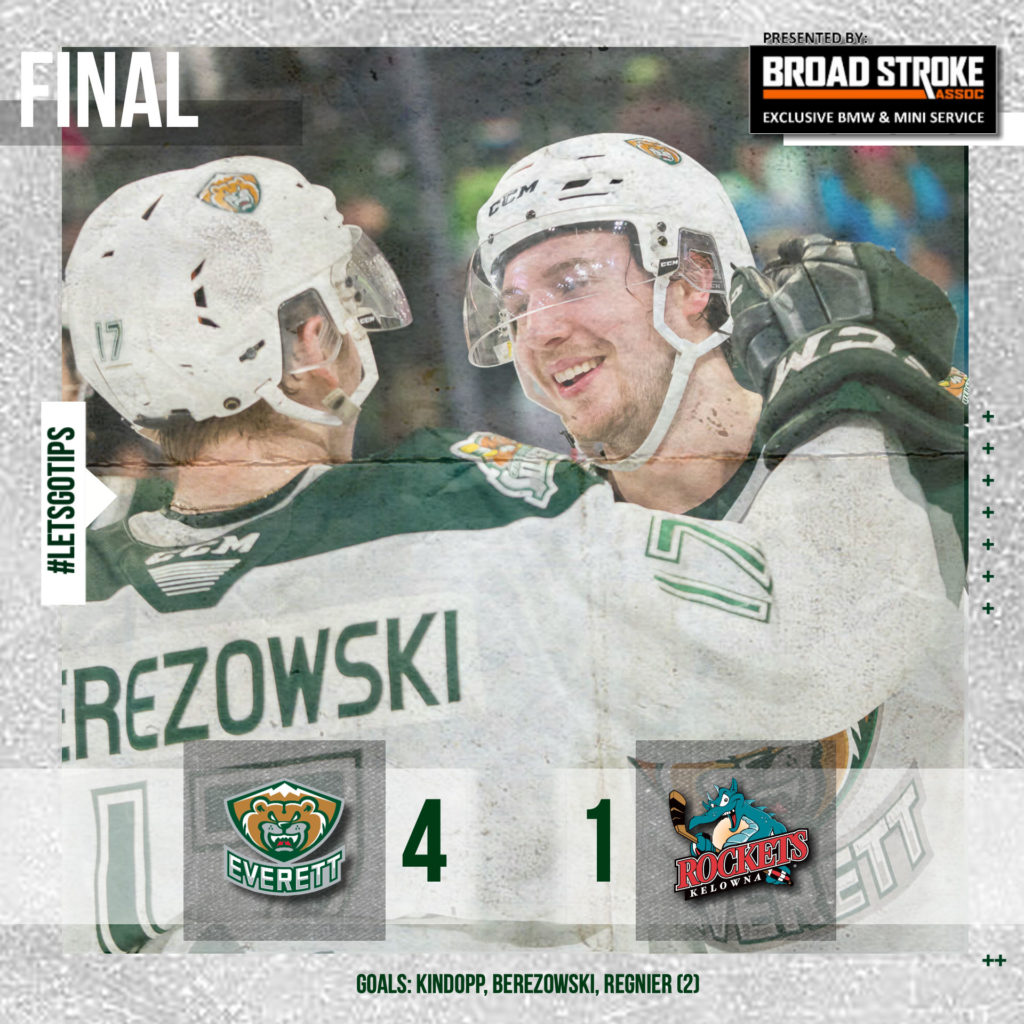 EVERETT, WA- In the second half of a back to back against the 2020 Memorial Cup hosts, the Everett Silvertips welcomed the Kelowna Rockets to their barn for the second time this season. With Ethan Regnier getting two goals and Bryce Kindopp scoring his fifth goal in as many games, Everett defeated Kelowna 4-1in front of 6,343 at AOTW Arena to keep themselves one point behind Portland for first in the US Division.

The Tips finished 3-1 against the Rockets and have pushed their season high win streak to nine games. The Tips outshot the Rockets 50-13 and scored four unanswered goals to surge to victory.

UP NEXT: The Tips take on the Portland Winterhawks Sunday, March 1st for their final meeting at AOTW Arena this regular season. It’s an important matchup to determine the US Division champion as the Tips and Winterhawks are separated by just one point. It’s also Mascot Mania as Lincoln and his friends cheer on Everett with the rest of Silvertip Country. Puck drop is 4:05 and the doors open at 3:05.

Kelowna opened the scoring with Jonas Peterek sniping one past Dustin Wolf at 14 minutes even in the first. The Rockets lead wouldn’t last for long as Bryce Kindopp scored thirty-nine seconds later to tie it 1-1, burying a snap shot from the left circle on Roman Basran. Kindopp’s goal at 14:39 was his 38th on the season, moving past Tyler Maxwell into second place, all time on the Tips goal scoring list.

Kelowna’s penalty kill was a big story of the first period as the Rockets killed off three Silvertips power plays and keep it a 1-1 hockey game after twenty minutes.

It was an Everett explosion in the second period as the Silvertips scored twice in the first three minutes of the frame. Jackson Berezowski put home his 18th of the season 1:24 into the second as Gage Goncalves and Cole Fonstad got the helpers on the score as Everett got the first lead of the game. Then, at the 2:52 mark, Ethan Regnier scored his 13th of the year, off the rush, to give the Tips a 3-1 advantage. After a Rockets timeout, Roman Basran was pulled in favor of Cole Schwebius and the Tips remained up by two after 40 minutes.

The Silvertips outshot Kelowna 16-2 in the final period and it was more than enough to preserve the lead. Ethan Regnier would provide added insurance at the 19:33 mark in the third with his second goal of the night and the Silvertips would go on to defeat the Rockers by a final score of 4-1. With the victory, Everett takes the season series with Kelowna, winning three games to one,

Jackson Berezowski was the first star of the contest as his second-period goal was the eventual game-winner. Taking home the second star was Ethan Regnier with his first two-goal game in his WHL career. The third star went to Gage Goncalves, who had one assist, five shots, and a +2. Goncalves now has eleven points in his last eight games to bring his season total to 66 points.

GAME NOTES: Scratched from tonight’s game were Hunter Campbell, Hunor Torzsok, Gianni Fairbrother, and Aidan Sutter… With just one goal against tonight, Dustin Wolf has allowed just one goal in five of his last seven starts… Everett has had at least 30 shots on net in their last seven games, including 50 tonight against Kelowna.