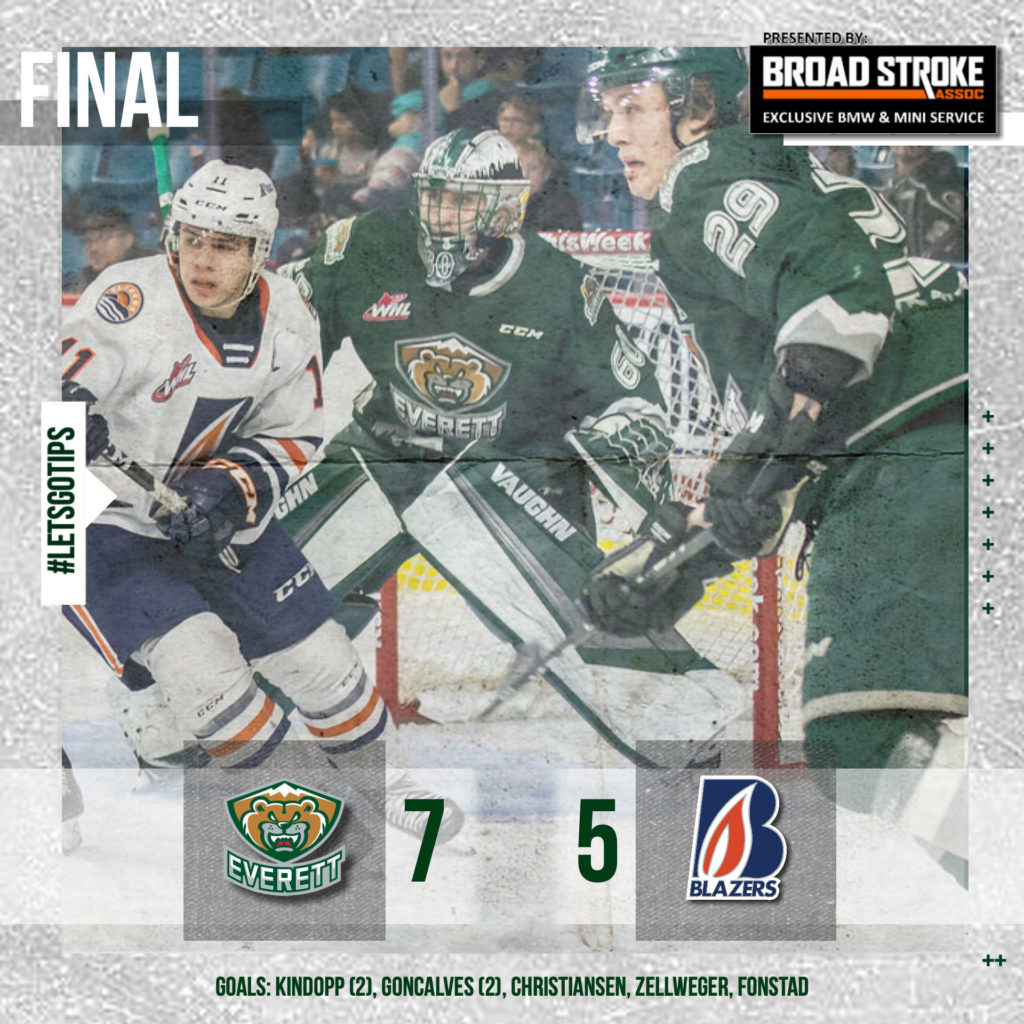 KAMLOOPS, British Columbia. – Cole Fonstad earned a goal and added three assists, while Bryce Kindopp and Gage Goncalves each bulked up with a pair of two goal outings to help lift the Everett Silvertips to a thrilling 7-5 victory over the Kamloops Blazers on Saturday in WHL action, before 4,619 fans at Sandman Centre.

The Tips bounced back from Friday night’s home defeat to improve to 9-0 in games after a loss this season and took the season series from Kamloops, 3-1 by winning the season series for the 7th straight season. Olen Zellweger earned his first career WHL goal in the second period and the Tips power play went 2-of-6 on the power play.

UP NEXT: The Tips six-game trip (1-0) continues Monday at Red Deer, opening at 6:05 p.m. (KRKO / Tips App / WHL Live) at Enmax Centrium and return home Sunday, Jan. 12 against the Regina Pats at 4:05 p.m. Tickets are on sale for the Jan. 12 home game, the next SmileGen Family Fun Zone event. The first several hundred fans in attendance will take away a Tips beanie presented by BECU.

Four goals in the first period opened up a wild night offensively, where the Tips set a season high for goals in a game and most goals combined between both teams (12) in a game. Gage Goncalves’ rebound at the right post put the Tips up 1-0 at 4:44 of the first period, answered by Orrin Centazzo’s 23rd goal of the season at 12:50 and Logan Stankoven’s snap shot off the rush at 14:16 for a 2-1 Kamloops lead.

Kindopp’s first goal of the game, a rebound at the net on the power play, tied the game with 5:08 left in the first for a 2-2 tie and the Tips escaped the first period with a 19-6 shots disadvantage.

They turned the tide in the second period, outshooting Kamloops, 16-8. Jake Christiansen hammered a shot from the right circle past Dylan Garand for a 3-2 lead at 1:47 for the second straight power play goal, and Zellweger was set up off the rush by Conrad Mitchell’s saucer pass from the left wing for a 4-2 lead, outworking Garand with a deke to the backhand.

Centazzo’s second goal of the night drew Kamloops to within 4-3 at 9:26, but Cole Fonstad buried his 7th goal of the year off the rush, set up by Justyn Gurney, to put the Tips up by two goals at 16:28.

Kindopp got the Tips back to a 6-3 lead as he scooted behind the defense at the 8:50 mark of the third period for his 27th goal of the season. It would stand as the eventual game winner, as back to back goals by Connor Zary and Max Martin drew the Blazers to within a goal, but Goncalves sealed up the game on an empty netter at 19:35.

Dylan Garand took the loss in net with 25 saves.

NOTES: Scratched from the lineup were Tyson Phare, Carter Halamandaris, Dylan Anderson, Martin Fasko-Rudas (World Juniors), and Dustin Wolf (World Juniors) … Kindopp has scored a goal in eight of his last nine games … the Tips improved to 7-0-0-0 in the last seven games at Kamloops … their power play has converted 10 of the last 21 opportunities.