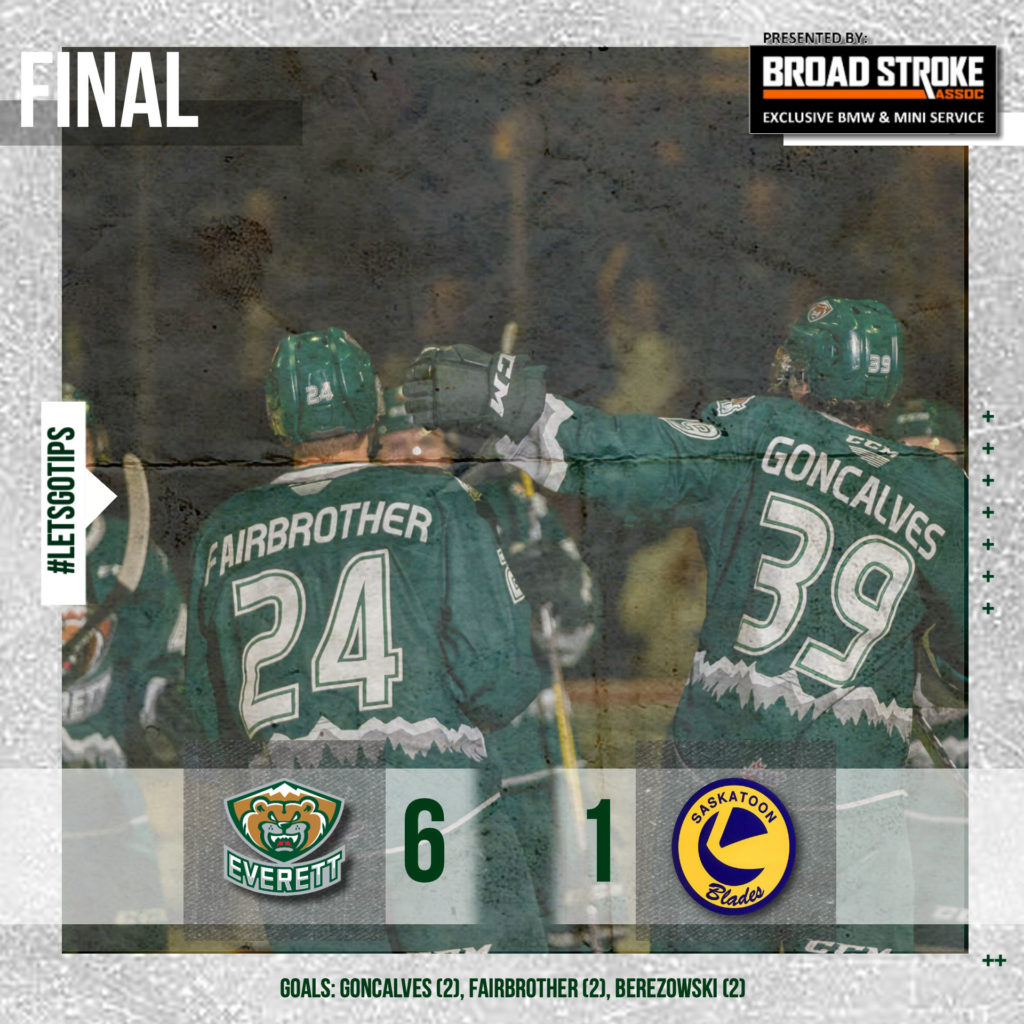 EVERETT, Wash. – A trio of Everett Silvertips – Gage Goncalves, Jackson Berezowski, and Gianni Fairbrother – each logged two-goal games while Ronan Seeley’s four assists finished one shy of the franchise single-game record, and the Silvertips cruised past the Saskatoon Blades in a 6-1 victory before 5,237 fans at Angel of the Winds Arena on Friday night in WHL action.

The Tips, unveiling Mitch Love’s #2 jersey from the rafters in a 15-minute pre-game ceremony, roared back from a 1-0 first period deficit and tied the single game franchise record for most power play goals (5) in a game, scoring on their first four man advantages.

Love to the rafters:

Dustin Wolf rebounded from the early goal to post 20 saves and the win, keeping the Blades off the board for the final 55:19 of the game.

UP NEXT: The Tips return to play on Saturday against the host Portland Winterhwaks at 6:05 p.m. (KRKO / WHL Live / Tips App) at Veterans Memorial Coliseum in the second meeting of the year. On Sunday, the Tips return home to host the Tri-City Americans at 4:05 p.m. for Tips hat giveaway, presented by Buzz Inn Steakhouse.

Seeley’s breakout game, his first career multi point game, was one assist shy of tying Peter Mueller’s single-game record set in the 2006-07 season. It was also the eight time the Tips logged five power play goals in a game.

Following the ceremony to honor Love’s nine seasons spent in Everett as a player and assistant coach, co-emceed by long time sports talk personality Jeff “The Fish” Aaron, the Tips fell behind on Radek Kucerik’s snap shot from the left circle at 4:41. Immediately, the Tips went to work to erase the deficit and seize control of the game.

Gage Goncalves waited out Nolan Maier at the right circle and finished a snap shot for his first of two goals, tying the game at 1-1 with 6:38 gone by. Goncalves then hit double digits in goals when he finished a one-timer at the right circle for a 2-1 lead at 13:03, and Fairbrother was set up in a similar spot for his blast past Maier for a 3-1 cushion with 4:34 left.

The Tips continued to floor the gas pedal with two more goals in the second period, both on Jackson Berezowski rebound opportunities for a 5-1 lead. Berezowski slipped a loose puck past Maier at the right post, set up by Michal Gut’s bid from the left circle at 3:16, and Berezowski blew the Tips lead to four goals on his eighth of the season at 7:53, set up by Max Patterson and Ronan Seeley.

Fairbrother then hammered a Ronan Seeley feed past Maier for his second goal of the night and the Tips fifth of the evening on the power play at 6:07 of the third period, putting the finishing touches on a record tying evening.

Maier allowed six goals on 34 shots and took the loss.

NOTES: Scratched from the lineup were Braden Holt (healthy), Aiden Sutter (healthy), Tyson Phare (injury),  and Jalen Price (healthy) … Cole Fonstad has earned a point in all eight games with the Tips and logged a pair of assists … the Tips have won eight straight meetings over Saskatoon, and by a combined total of 12-1 over the last three years.