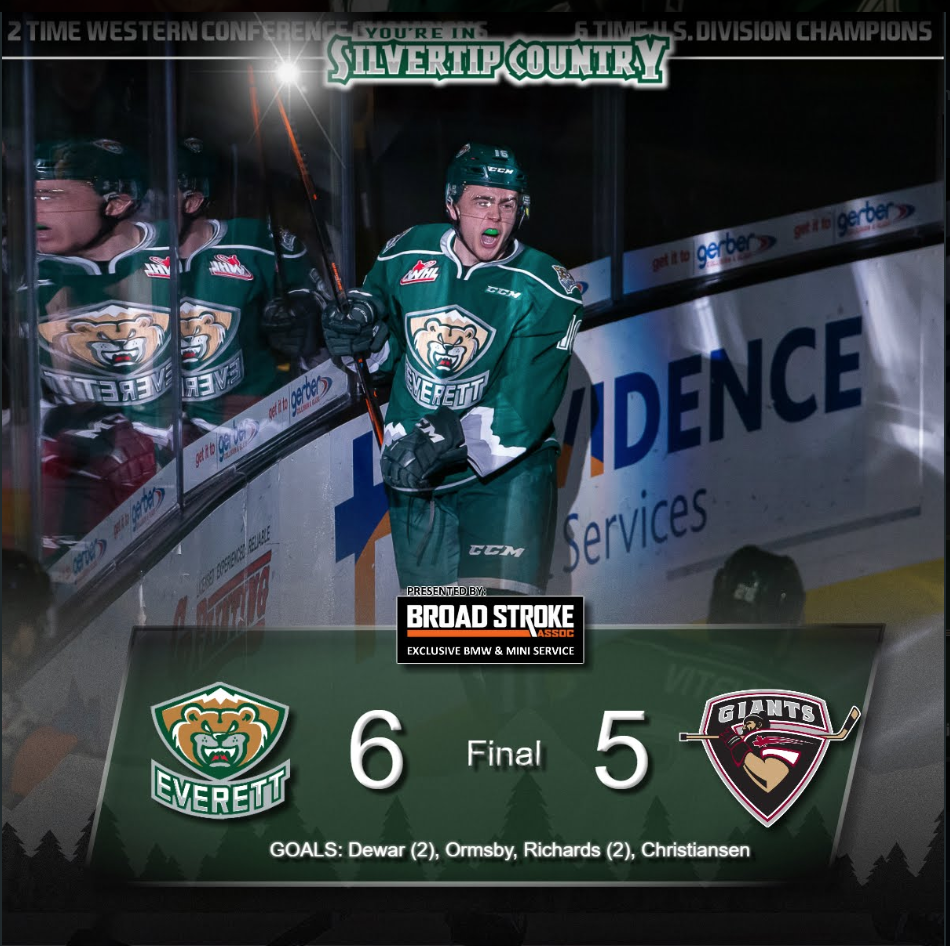 Nine Silvertips recorded points tonight and the Silvertips captured the title of the best team in the Western Conference. Sean Richards also chipped in with two goals, while defenseman Artyom Minulin recorded three assists and has six points in six games since joining the Silvertips blueline.

UP NEXT: The Western Conference-leading Silvertips play at home again on Sunday, Nov. 18, for a 4:05 p.m. puck drop versus the division rival Spokane Chiefs (1380 AM / 95.3 FM / Tips App / WHL Live). Tickets are available at www.everettsilvertips.com/tickets.

The Silvertips were first on the board with a Connor Dewar goal at 15:05. Import-forward Martin Fasko-Rudas drove the puck behind Vancouver’s net to feed Dewar with a one-timer, initially stopped by Giants goaltender David Tendeck, but created a rebound that slid past the goal line. Vancouver was granted two power play opportunities coming up short, but tallied five shots, compared to Everett’s 13, on net in the opening frame.

In the second period, forward Luke Ormsby put Everett up 2-0 at 9:19 after he pounded a shot on net off a pass from rookie Jackson Berezowski and defenseman Artyom Minulin, as Ormsby collected his own rebound and scored from the right circle.

Giants’ winger Davis Koch cut Everett’s lead to 2-1 at 16:02 off assists from center Milos Roman and blue liner Dylan Plouffe. Off a lengthy lob pass from his own defensive zone, Everett forward Dawson Butt set up 20-year-old forward Sean Richards with a breakaway where Richards used a burst of speed and chipped a shot over Tendeck’s glove at 16:36 for a highlight reel goal.

A checking from behind penalty called on Vancouver defenseman Dylan Plouffe at 17:59 led the Silvertips to their first power play goal of the night. Dewar patiently carried the puck into the zone, fed defenseman Wyatte Wylie with a tape-to-tape pass, passed on to defenseman Jake Christiansen where he quickly wristed a shot past Tendeck from the left circle at 18:56.

A slash called on Everett’s Richards at 9:52 was followed by a Giants’ power play goal at 10:04, scored off a slap shot from the blue line by Matt Barberis off a pass from Lukas Svejkovsky and Jared Dmytriw. A two-on-one Silvertips’ break led to another Richards’ goal, off a saucer pass from Capitals Riley Sutter and Butt at 12:50.

The Giants continued to chip away with a wrap-around goal at 15:50 scored by defenseman Jared Dmytriw off a pass from center Dawson Holt and winger Matt Barberis. The Giants pulled their goalie at 17:12, followed by a Dewar empty netter at 18:03, assisted by Minulin for a 6-4 lead. The Giants kept at it with another goal scored by center Dawson Holt at 18:49 to cut the Silvertips lead to 6-5, but the Tips won an end zone puck battle in the final seconds to seal the game.

NOTES: Silvertips scratches include Ronan Seeley, Akash Bains and Bronson Sharp … the Silvertips are 51-36-4-1 in 92 lifetime meetings with the Giants … the Tips won for the ninth time in 11 games … Vancouver earned their second loss in regulation on the road all season … the Tips won the battle at the face-off circle, 34-26.