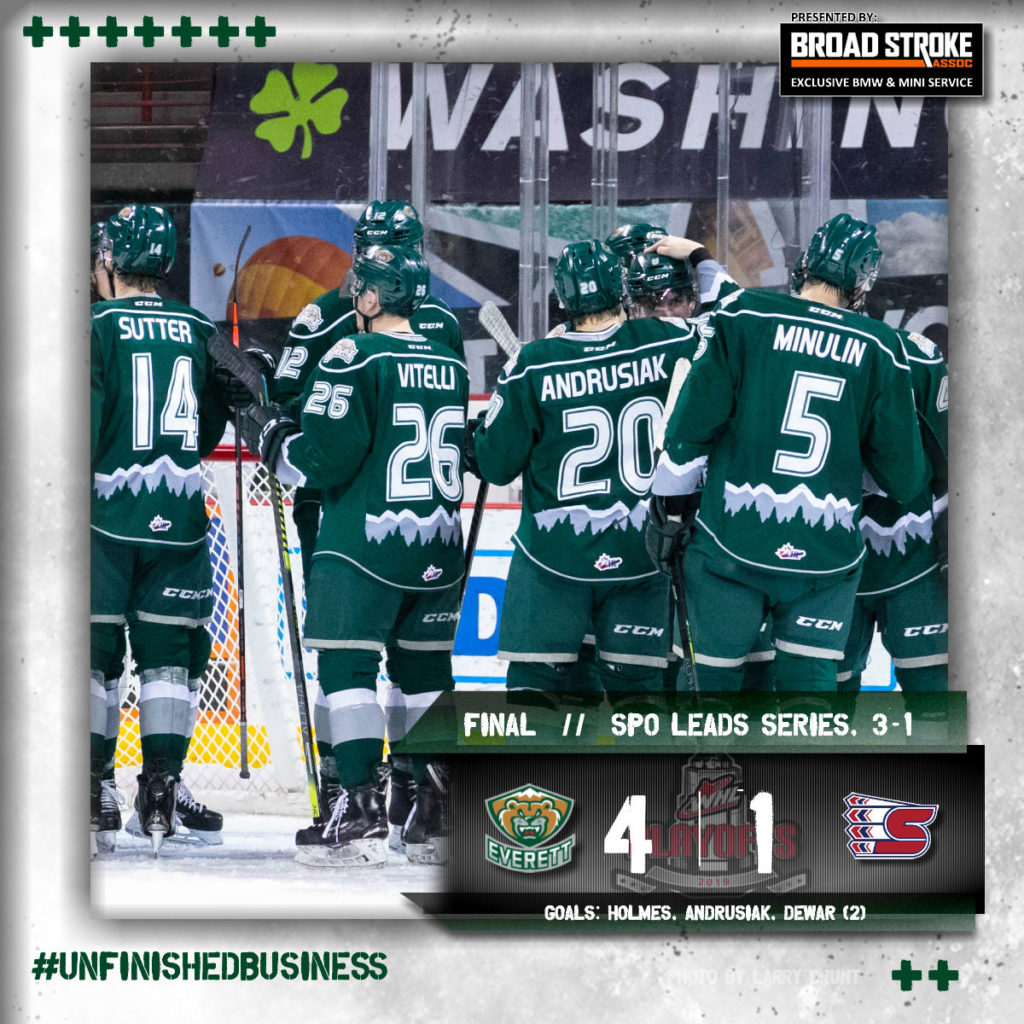 SPOKANE, Wash.— After being held scoreless for the first three games of the series, captain Connor Dewar exploded for a pair of goals and added an assist to help lift the Everett Silvertips to a 4-1 victory over the Spokane Chiefs in Game 4 before, avoiding elimination and forcing Game 5 before 5,666 fans on Friday at Spokane Arena.

The Tips went wire-to-wire for the victory and improved to 2-1 (lifetime) when facing elimination under head coach Dennis Williams, winning their fifth straight Game 4 situation on the road. Bryce Kindopp chipped in with a pair of assists while goaltender Dustin Wolf stopped 27 shots.

The Tips wasted little time in the first period to get on the board and built a 2-0 lead on goals by Robbie Holmes and Zack Andrusiak. Holmes scored his third goal of the postseason at 6:21 after intercepting a cross-ice outlet by Ty Smith, exchanging the puck with Max Patterson, and uncorking a snap shot past Bailey Brkin from the left circle.

Andrusiak finished a Bryce Kindopp relay at the top of the crease for a power play goal and two goal cushion at 9:47, extending his postseason point streak to six straight games. Spokane answered with an Adam Beckman power play goal from the right circle with 1:07 left in the first period, but the Tips answered with a strong start to the second period before Dewar’s first goal.

Gage Goncalves, stationed near the right post, took Riley Sutter’s relay and fed Dewar, tape to tape in the slot, who hammered a one timer for a 3-1 lead at 6:41. Dustin Wolf followed with a pair of big saves on Luc Smith and Noah King later in the period to keep the Tips up by two goals.

Spokane nearly drew to within a goal but an extra attacker snipe by Riley Woods was overturned on a goaltender interference ruling, and the Tips finished the game on Dewar’s empty netter with 1:14 left in regulation.

NOTES: Silvertips scratches included Dawson Butt, Dylan Anderson, Jalen Price, Conrad Mitchell and Justyn Gurney … Spokane held a slim lead in shots, 28-27, and it was the first time in the entire postseason the Tips were outshot in a game … the Silvertips went 1-of-5 on the power play and committed only eight minutes in penalties.