TIPS WIN // The Toss is Boss 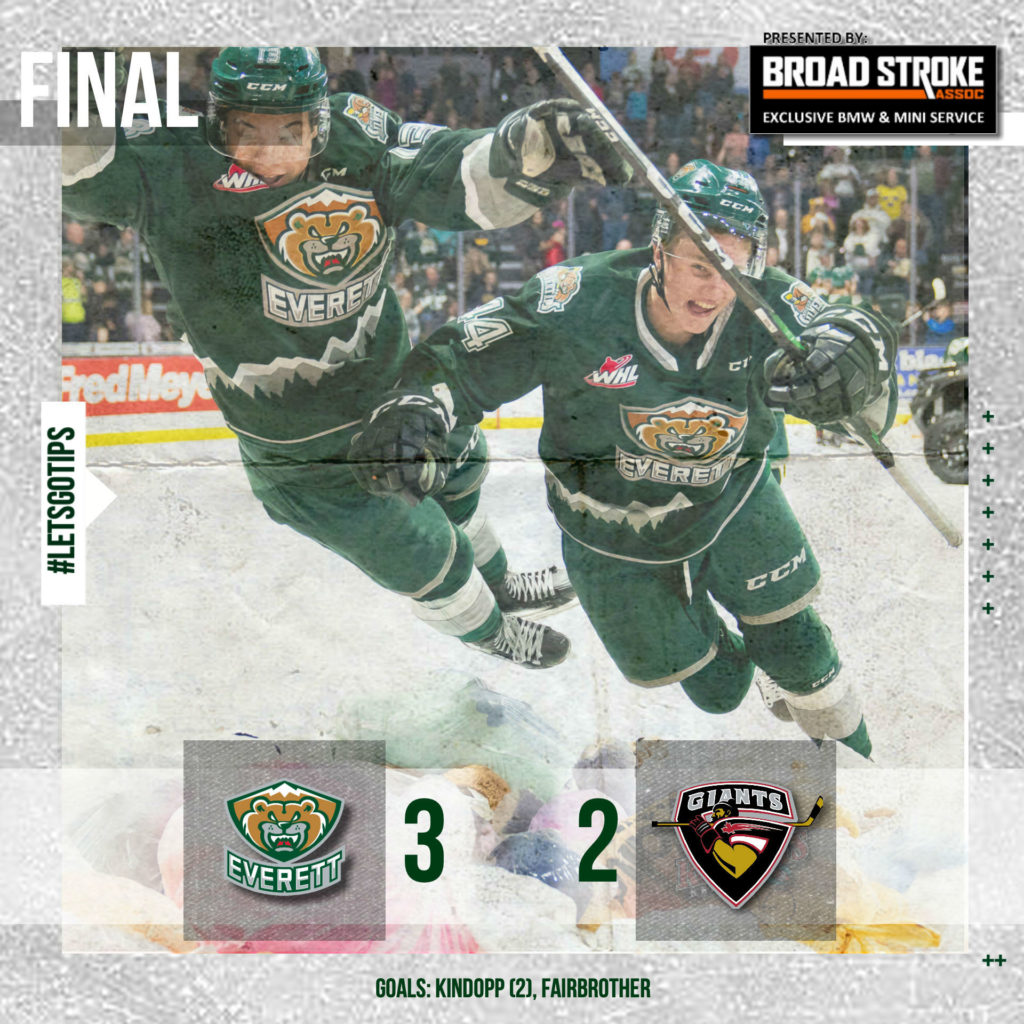 EVERETT, Wash. – Bryce Kindopp scored twice to reach a tie for the WHL lead in goals and buried the Teddy Bear Toss goal just 1:52 into the game to help lift the Everett Silvertips to a 3-2 win over the Vancouver Giants, Saturday before 7,388 fans in downtown Everett in WHL action.

Gianni Fairbrother added a power play goal in the first period and Dustin Wolf turned in a 25 save effort. With the win, Everett jumped to sole possession for a moment of the US Division lead with 46 points and are 2-0 against the Giants this season, who were without key defenseman Bowen Byram as he is attending the World Junior’s Selection Camp for Team Canada. Portland took back the top spot after a win at Tri-City.

UP NEXT: The Tips return home on Sunday, 4:05 p.m. (KRKO / WHL Live) against the Spokane Chiefs in downtown Everett to cap three games in three days. Purchase at the link below and receive the “Now & Later” offer: for each two tickets for Sunday purchased, receive a bonus flex ticket voucher free for any remaining Tips home game.

Bryce Kindopp couldn’t wait to get the Teddy Bear toss started as he scored 1:52 into the first period for Everett. With assists from Cole Fonstad and Ronan Seeley, Kindopp’s teddy tosser put him solely in second in WHL goals this season with 22. But it wasn’t the only scoring in the frame as Gianni Fairbrother hit a one-timer on the power play to put the Tips up 2-0 with less than five minutes in the first. However, newly acquired Giants forward Tyler Preziuso cut the deficit to one as Everett led 2-1 after the first 20 minutes.

Who else but the captain? @kindoppian scores this year's Teddy Bear Toss goal for the @WHLsilvertips!

The second period saw a defensive battle as no team could find the back of the net. Tips netminder Dustin Wolf stopped all 10 of the Vancouver Giants shots on goal in the period while his counterpart, David Tendeck, made 5 saves. Everett had three penalties in the second while Vancouver had just one, including a Conrad Mitchell roughing and Justin Lies USC minor at the 11:35 mark. In the faceoff department, the Giants took 11 while the Tips won 6.

The third period was filled with goosebumps as it went down to the wire. Kindopp put home his second of the night on the powerplay to give the Tips a slight 3-1 advantage. It only lasted for five minutes before Justin Sourdif put home his 12th of the season with less than two and a half minutes to go and made it a 3-2 Silvertips lead.

While Vancouver had a major push at the end, it was Everett who came away with two points and the W.

Everett swept the three stars as Kindopp finished as the first star with his two-goal outing. Gianni Fairbrother took home the second star with his goal in the first.

To cap it off, Dustin Wolf earned third-star as he made 25 saves on 27 shots to give Everett their fifth win in six games. While missing out on earning a star, Ronan Seeley and Cole Fonstad each had two assists, marking the fifth game in Fonstad has had at least one assist.

NOTES: Scratched from the lineup were Braden Holt, Michal Gut, Tyson Phare, Martin Fasko-Rudas (World Juniors), and Carter Halamandaris … Kindopp’s two goal game gave the Tips their 19th multi goal effort this season … the Tips have improved to 4-1 since the return of Teddy Bear Toss in 2015, and have scored the toss goal in the first period on four of five occasions.