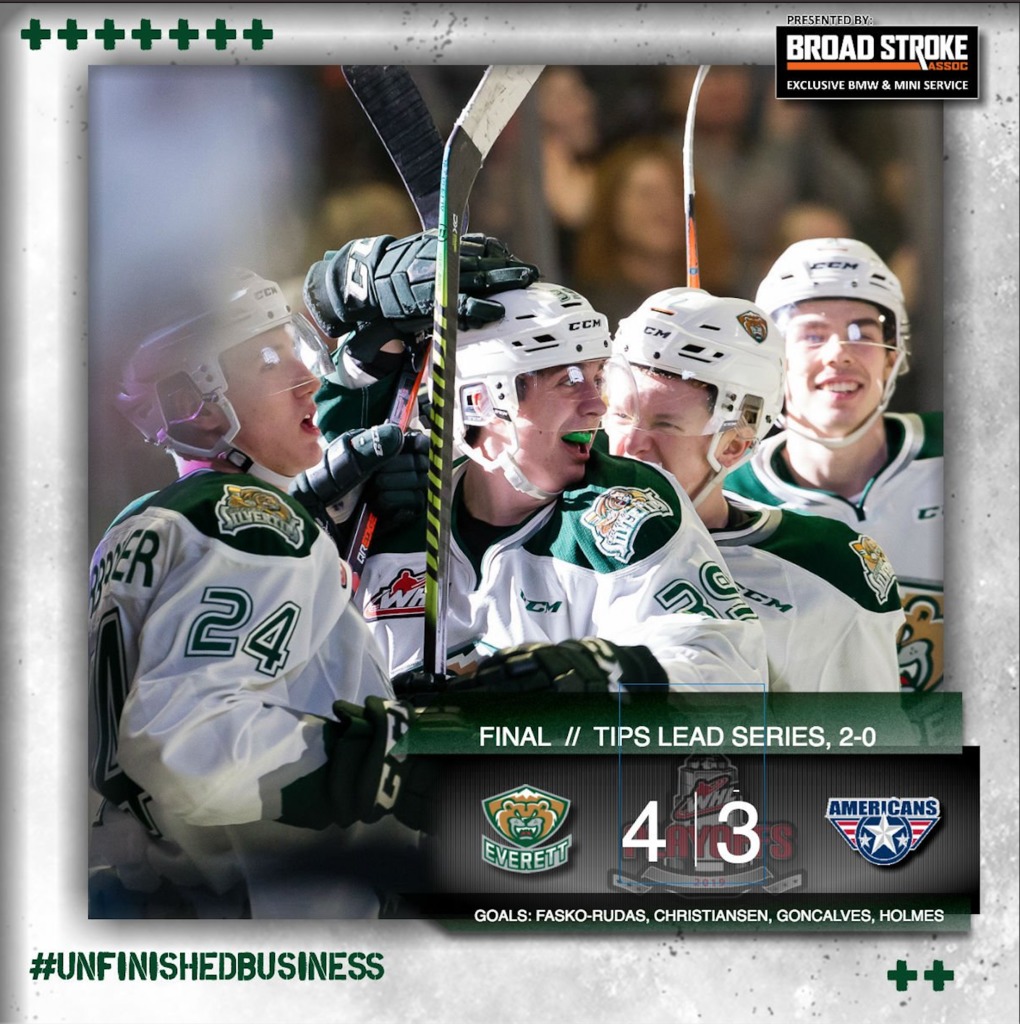 EVERETT, Wash. – The Everett Silvertips benefited from eight players recording a point or more on the scoresheet and took a 2-0 series lead as they exploded for three second-period goals to defeat the Tri-City Americans, 4-3, before 5,564 at A.O.T.W. Arena on Saturday night in WHL Playoff action.

“I thought our guys did a good job of controlling their emotions, playing in check and a good job of staying right in the moment,” Head Coach Dennis Williams said.

Tri-City earned a 1-0 lead at 10:51 in the first period with a power play goal scored by center Krystof Hrabik with assists from winger Parker AuCoin and defenseman Aaron Hyman.

Everett forward Martin Fasko-Rudas evened the score, 1-1, at 17:15 with a power play goal. Defenseman Jake Christiansen cycled the puck over to his blue line partner Artyom Minulin, whose shot from the point was redirected in by Fasko-Rudas.

The Silvertips held the edge on shots after one, 16-9.

Christiansen gave the Tips a 2-1 lead with a booming slap shot from the top of the left circle. Minulin found forward Bryce Kindopp breaking into the offensive zone, who dropped a pass to Christiansen who then delivered the shot.

Rookie forward Gage Goncalves extended the Silvertips lead to 3-1 only 19 seconds after Christiansen’s goal. Forward Reece Vitelli intercepted a pass behind the Tri-City net and connected with Goncalves who cut in from the slot to bang in the one-timer.

Everett winger Robbie Holmes made it 4-1 at 18:23. Kindopp led the puck into the zone and dropped it back to Patterson on the blue line, who delivered a sleek pass to Holmes crease-front.

The Silvertips continued to pump shots on net and hold a 27-17 shot advantage after two periods of play.

Tri-City forward Nolan Yaremko cut the Everett lead to 4-2 with a short-handed goal at 2:36 into the third. Yaremko made a centering pass from behind the net, which was deflected in off a Silvertip skate.

The Americans tacked on another goal to cut their final deficit to 4-3.

NOTES: Silvertips scratches included Riley Sutter, Dylan Anderson, Justyn Gurney and Connor Dewar … This is the fifth postseason meeting between Everett and Tri-City … the Tips improved to 8-7 lifetime in Game 2 situations at home … it is the sixth time they have gone up 2-0 in a series.