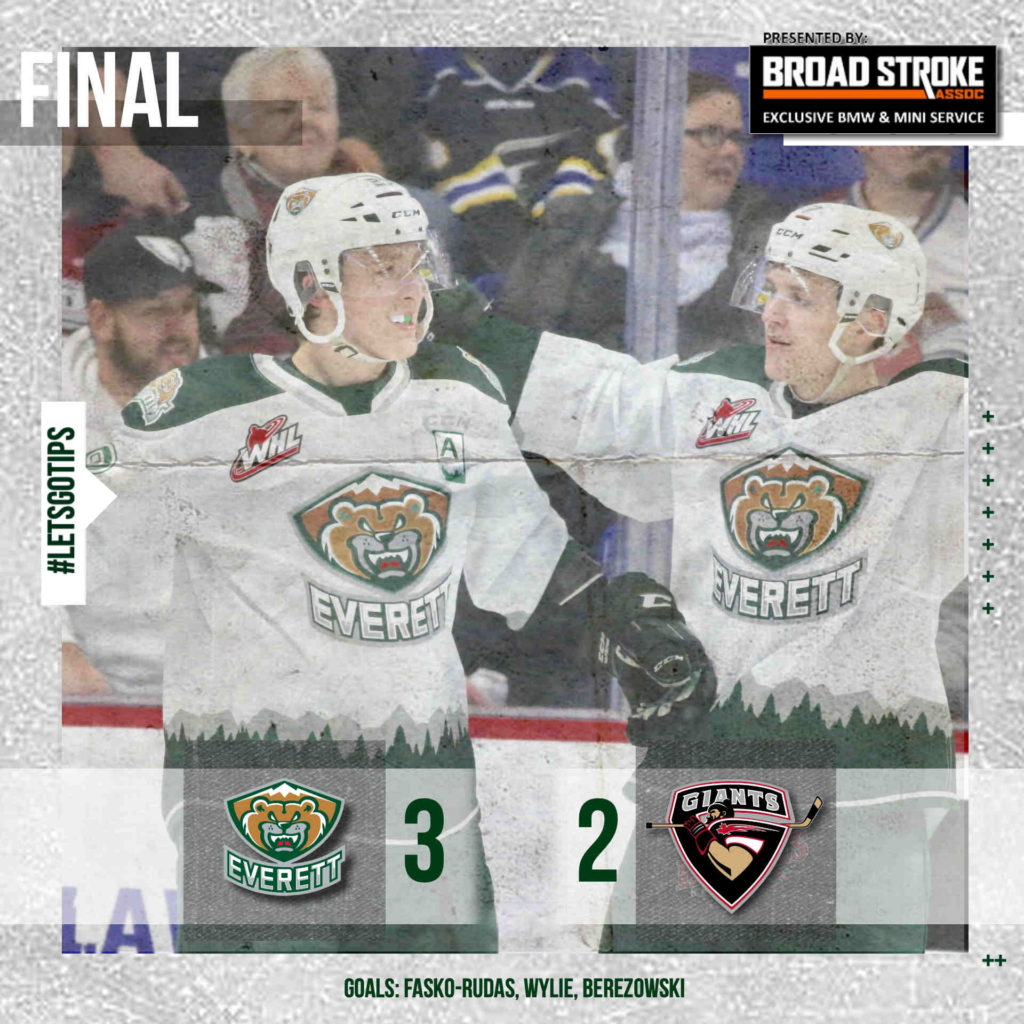 LANGLEY, British Columbia – Dustin Wolf turned in 34 saves and the Everett Silvertips rallied out of a 2-0 deficit to beat the Vancouver Giants, 3-2 for their fifth straight win before a crowd of 3,476 at Langley Events Centre on Friday night.

The Tips extended their lead to first place in the U.S. Division with a 9-3-0-0 record (18 points) and won their third straight meeting over Vancouver. Martin Fasko-Rudas sealed his return to the lineup with a goal in the first period, while Wyatte Wylie eared a multi point game with a goal and an assist.

UP NEXT: The Tips enter a six-day break and return home Friday, Nov. 1 against the Portland Winterhawks at 7:35 p.m. (KKXA / WHL Live) at Angel of the Winds Arena. Tickets for Hockey Happy Hour (Broad Stroke Associates) are now on sale at the link below, offering a ticket and beverage as low as $25.

Wolf turned in a flurry of saves in the first period before Dylan Plouffe hammered a one-timer from the right circle, set up by Lukas Svejkovsky at 11:21 for a 1-0 lead. Vancouver bumped the lead to 2-0 on a power play goal with 4:06 left when Tristen Nielsen set up Cole Shepard, backdoor for his second goal of the year.

The Tips began to tilt the game back in their favor on a Martin Fasko-Rudas deflection from Wyatte Wylie’s point shot, with 38 seconds left in the first period for a 2-1 deficit. Wylie then tied the game on a power play, with 13:58 left in the second period. Wylie controlled a Gianni Fairbrother tape-to-tape pass at the point, skated to the right circle, and looked for Martin Fasko-Rudas at the left post. Wylie’s bid snuck off the pads of David Tendeck and into the back of the net.

Wolf then turned in another big save which sprung the Silvertips up the ice on another power play, and Max Patterson fought off a loose puck battle at the right circle. He slipped a pass to Jackson Berezowski, skating into the slot, and hammered a one-timer past Tendeck’s glove for a 3-2 lead.

Outshot 13-6 in the third period, Wolf and the Silvertips withstood a pair of flurries in the final five mintues, while Wolf turned in a big save on Bowen Byram’s one-timer on a loose puck and fought off a Svejkovsky rebound, while Vancouver fired a pair of attempts that rattled off the crossbar.

On the final shift, Gianni Fairbrother successfully tied up the puck in the corner to drain the clock.

Tendeck took the loss with 19 saves.