TIPS WIN // Up Next: Round Two 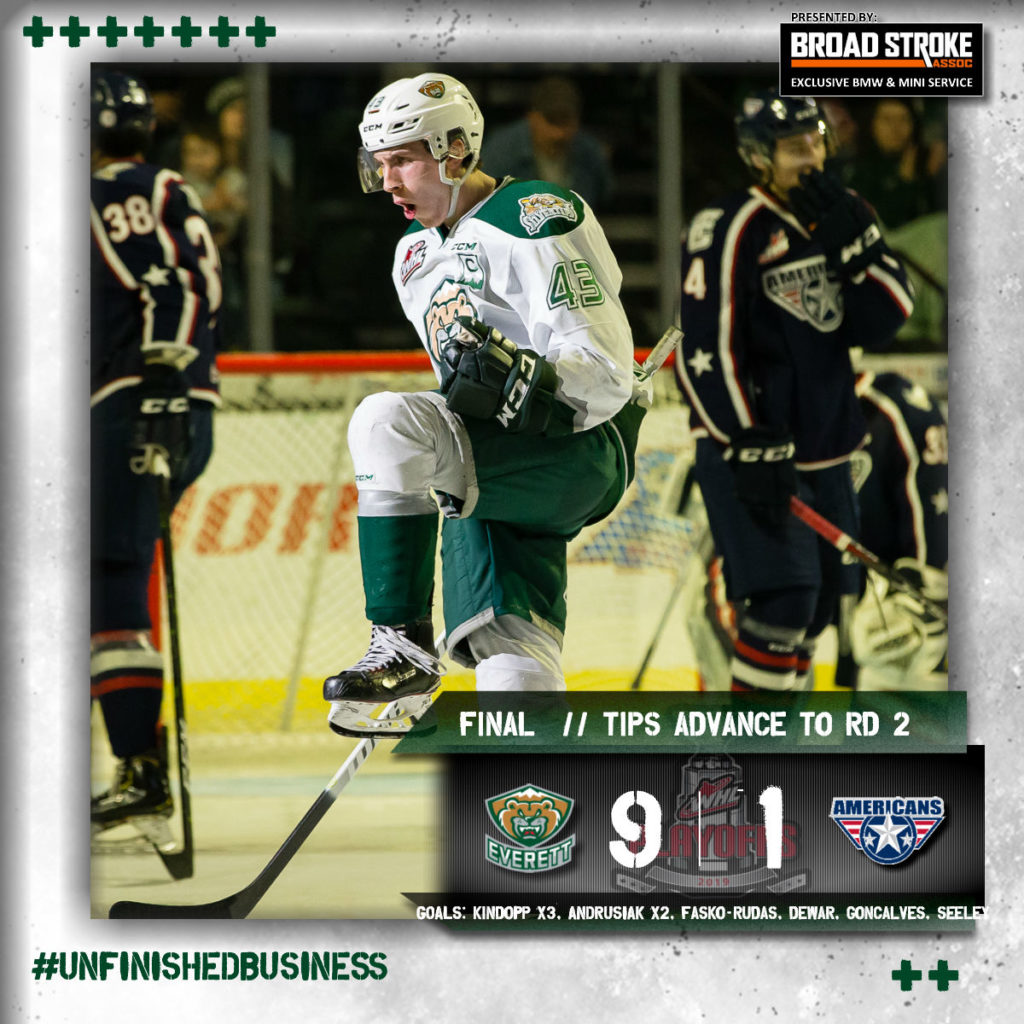 EVERETT, Wash. –The Silvertips punch their ticket to the second round of the WHL Playoffs by scoring a franchise-record nine goals in a single playoff game, as the Everett Silvertips defeated the Tri-City Americans, 9-1, before 4,617 at A.O.T.W. Arena on Saturday night in WHL Playoff action.

UP NEXT: The Tips will face the Spokane Chiefs in second round of the WHL Playoffs, starting Saturday, April 6, at A.O.T.W. Arena at 7:05 (1380 AM / 95.3 FM / TuneIn App / WHL Live). Tickets on sale at www.everettsilvertips.com/playoffs.

The Silvertips pounced on an early lead at 11:59 to make it 1-0. Kindopp deked around Tri-City goaltender Beck Warm in front of the crease to finish with a backhander off a centering pass from Goncalves.

Everett extended their lead to 2-0 at with a power play goal at 15:15. Defenseman Jake Christiansen fed d-man Wyatte Wylie at the right circle, who ripped a shot that produced a rebound, picked up by Andrusiak and stashed away with a backhander.

Fasko-Rudas tacked on another first period goal, to make it 3-0 at 18:53. Kindopp and Dewar both recorded assists on the play with their close-range shots from the crease, but Fasko-Rudas tucked it home.

The Silvertips blasted a total of 22 shots on goal in the opening period, while Everett goaltender stopped all six shots he faced.

Everett didn’t let up in the start of the second, as Dewar sniped a goal from the right circle off a pass from Goncalves at 1:27 to make it 4-0.

Goncalves followed up his assist with a goal to put the Tips up 5-0 at 9:26. Fasko-Rudas fed Andrusiak, who delivered a beautiful tape-to-tape pass from far side to Goncalves, who crashed the slot and buried the puck top-shelf.

Kindopp scored his second goal of the night to make it 6-0 at 11:44, as he picked up a rebound on the right side of the crease created by a shot from forward Lucas Cullen.

The Silvertips continued to dominate the offensive zone and outshoot their opponents 34-13.

Kindopp completed his hat trick at 2:07 into the second to extend the lead to 7-0, on an unassisted shot from the slot top shelf.

Andrusiak notched his second goal of the night on a three-on-two break at 7:14 to make it 8-0. Forward Robbie Holmes found Dewar to start the break, who hit Andrusiak with a drop pass and he finished with a shot wired from the slot.

Tri-City’s Kyle Olson scored the Ams first goal of the night, to make it 8-1 at 10:35, off assist from winger Nolan Yaremko and defenseman Aaron Hyman.

Silvertips defenseman Ronan Seeley scored his first WHL Playoff goal at 11:12 to put the Silvertips up 9-1, to set the franchise record for most goals in a single playoff game. Defenseman Wyatte Wylie connected a pass to Dewar, who found Seeley at the point.

NOTES: Silvertips scratches included Riley Sutter, Dylan Anderson, Justyn Gurney and Jalen Price… Everett went 5-3-0-0 against Tri-City in the regular season … The Silvertips will advance to the second round for the 5th consecutive season … The Tips are 11-8 lifetime in Game 5 situations (8-4 on home ice) when forcing elimination … Everett converted on one-of-four power play opportunities … The Tips won 37 of 69 (53.6 percent) faceoffs …