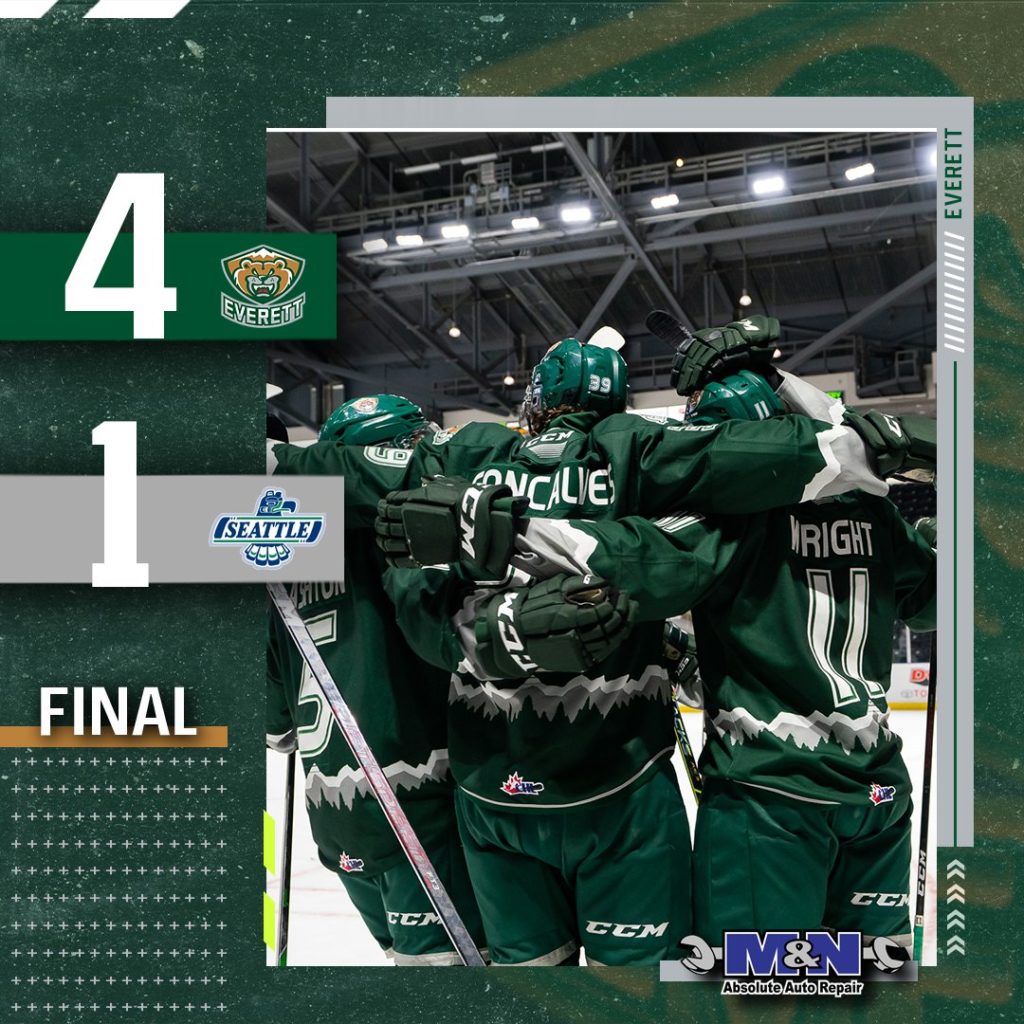 KENT, Wash. – Dustin Wolf made 29 saves in his 149th career WHL appearance while Gage Goncalves had three assists to close his third season to help the Everett Silvertips cruise to a wire-to-wire 4-1 victory over the Seattle Thunderbirds in the season finale, at accesso ShoWare Center on Saturday in WHL action.

The Silvertips, closing their eighth U.S. Division championship campaign at 19-4 (38 points), finished the pandemic-shortened season winning 10 of the final 11 games while Ethan Regnier scored in his final WHL game, and Ben Hemmerling, Jacob Wright, and Ryan Hofer each adding a goal.

Hemmerling set a screen to deflect his third goal of the season past Jackson Berry just 2:10 into the game, set up by Ronan Seeley’s point shot. The Tips, unfazed after outshot 12-6 in the opening 20 minutes, used a big save by Wolf from point blank range on Lucas Ciona to keep Seattle off the board and then added a pair of goals in 2:06 for a 3-0 lead.

Ben Hemmerling with a tip for the Tips! @WHLSilvertips pic.twitter.com/SFM6XxFWQL

Ethan Regnier’s ninth goal of the season finished a backdoor feed from Cole Fonstad at the left circle with 5:38 to go in the second period. Goncalves, stationed behind the net, then fed the tape of Wright who slammed a one-timer for a 3-0 cushion, between the circles with 3:32 remaining.

After outshooting Seattle 17-9 in the second period, the Tips began to make their move to close the game and after a vicious scrum at the glass sent away six combined players for the remainder of the game, the Tips answered Keltie Jeri-Leon’s extra attacker goal with 1:42 left with Hofer’s empty netter, a backhander from center ice, with 36 seconds remaining.

At the final horn, the Silvertips huddled around their net for one last emotional embrace as teammates for 2021, helping close the chapters of Fairbrother, Fonstad, and Regnier as victors – celebrating with teammates such as Wolf and Goncalves, both with signed NHL entry level contracts and eligible to move to the pro level next season.

The Silvertips finished the head-to-head series 6-1 against Seattle, marking the first time in franchise history they lost just once in regulation to their U.S. Division rival.

GAME NOTES: Silvertips scratches included U18 departures Braden Holt and Olen Zellweger, while Brendan Lee, Brady Van Herk and Brendan Hunchak were healthy scratches … Fonstad and Goncalves finished the season as co-leaders for the Silvertips in points (34), while Fonstad paced the Silvertips with 16 goals and Goncalves led the program with 22 assists … Wolf, through 149 WHL games, has a career save percentage of .935, a franchise best.