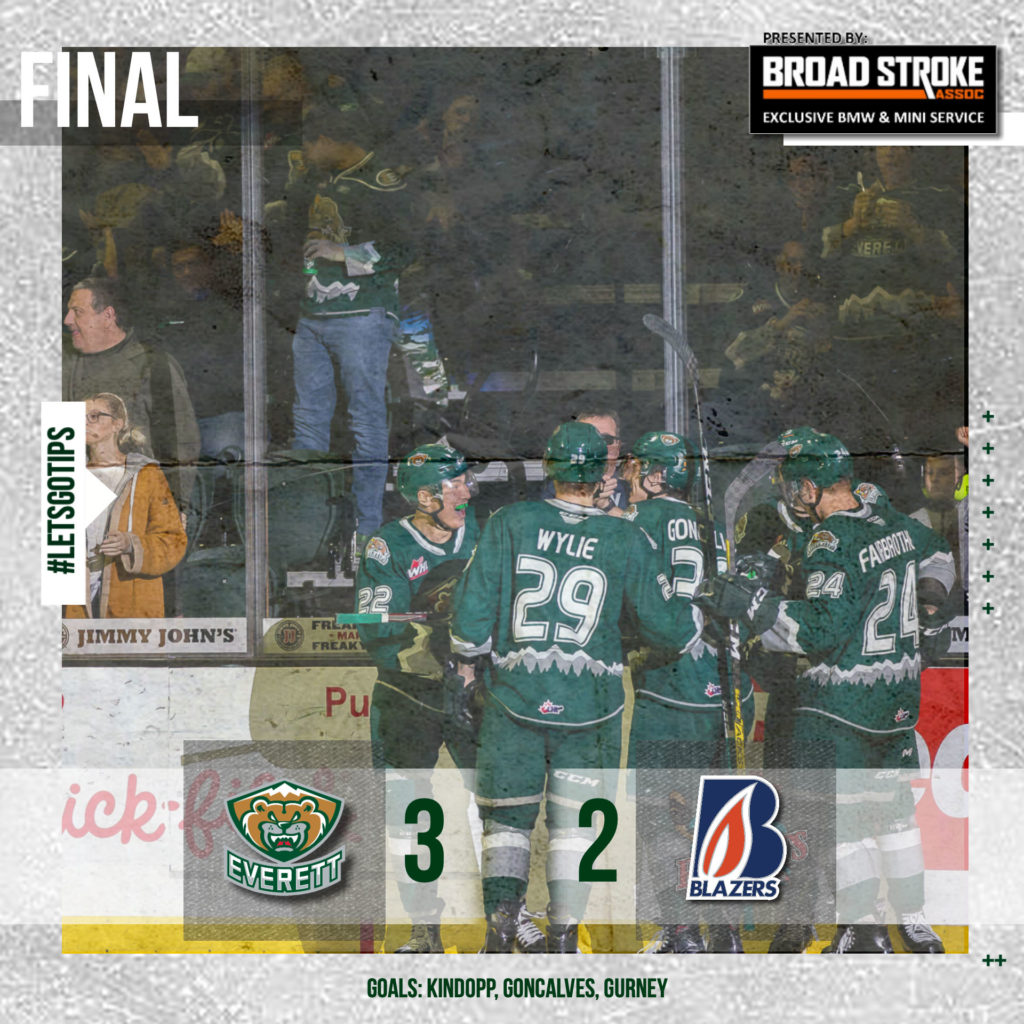 Wolf’s highlight reel save, Gurney’s game winner boosts the Tips to a 10-4-0-0 start over the first 14 games

EVERETT, Wash. – Dustin Wolf made 42 saves, including 17 in the final period while Justyn Gurney’s goal stood as the game winner to lift the Everett Silvertips to a 3-2 victory over the Kamloops Blazers before a crowd of 5,349 at Angel of the Winds Arena in downtown Everett, Saturday in WHL action.

The Tips won for the sixth time in seven games and beat Kamloops for the second time in three games. Aside from the Tips never trailing, Wolf also provided an array of highlight reel saves including a sprawling, behind-the-back, glove save on Ryan Hughes in the first period.

UP NEXT: The Tips finish three games in three days tomorrow at 5:05pm (KRKO / WHL Live / Tips App) against the Spokane Chiefs at Spokane Arena. Their next home game is Nov. 16 against the Winnipeg ICE, 7:05 p.m. in downtown Everett. Tickets remain on sale, including the Chick-fil-A Fan 4 Pack, offering 4 tickets and sandwiches for as low as $56. Rally towels (limited available) will be presented to fans at the doors, presented by Erickson Furniture.

Wolf’s highlight reel save on Hughes followed up a 2-on-1 save on Martin Lang, who then took the puck behind the net and fed Hughes, open at the left circle. Hughes triggered a one-timer on net, denied by Wolf who sprawled to the blocker side and stabbed his glove on the puck.

Bryce Kindopp’s 11th goal of the season, a rebound opportunity at the left circle, put the Tips ahead 1-0 at 13:10 on a set-up by Max Patterson.

Connor Zary tied the game on a snap shot between the circles, finishing a feed by Orrin Centazzo off the rush just 54 seconds into the second period. But Gage Goncalves responded by finishing a scramble at the front of the net for a power play goal at 13:31 and a 2-1 lead.

In the third period, Justyn Gurney extended the lead at 5:46 for a 3-1 advantage by finishing Goncalves’ feed at the front of the net after Kamloops turned the puck over. The Tips then went to the power play on a potentially game sealing situation on a Montana Onyebuchi interference penalty, but man power was evened up four seconds later on a Max Patterson tripping call.

The Blazers, desperate to get back into the game, found a late Zane Franklin goal after pulling goaltender Dylan Garand for a five-on-four situation. Hughes took a pass at the right circle, wiring the puck to the front of the net where he found an uncontested Franklin at with 1:50 left.

The Tips sealed the game after Wyatte Wylie pushed the puck safely to the side boards with five seconds left, squashing a late rally attempt by the Blazers.

Garand took the loss with 25 saves.

MORE: It was quite the turnaround from last night.

NOTES: Scratched from the lineup were Braden Holt, Olen Zellweger (World U17 Hockey Challenge), Cole Fonstad, and Jacob Wright … Goncalves has points in six of the last seven games … Wyatte Wylie, celebrating his 20th birthday, earned an assist for the 100th point of his WHL career … the two teams will meet one final time this season on Dec. 28 in Kamloops.