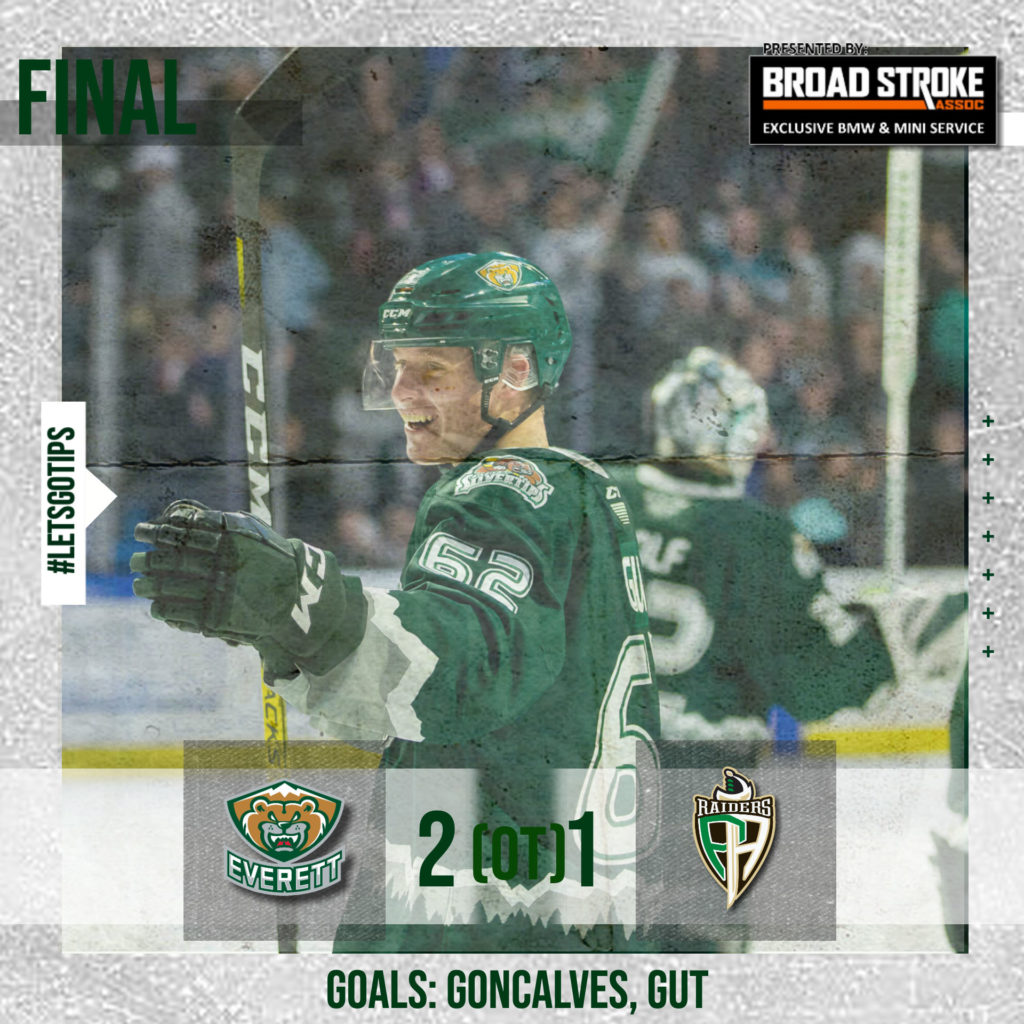 EVERETT, Wash. – Michal Gut scored his third game winning goal of the season, 1:38 elapsed on a snap shot past Boston Bilous to lift the Everett Silvertips to a thrilling 2-1 overtime victory over the Prince Albert Raiders before 5,107 fans at Angel of the Winds Arena in downtown Everett on Saturday in WHL action.

The Silvertips finished their five game homestand at 4-1, extending their lead for first place in the U.S. Division after winning for the seventh time in eight games. Gage Goncalves broke the scoreless tie in the third period, extending his goal scoring streak to four games, while Dustin Wolf turned in a 30 save effort to fend off a Prince Albert rally in the final minute of regulation.

UP NEXT: The Tips enter a five-day layoff and next visit the Vancouver Giants, 7:35 p.m. at Langley Events Center on Friday, Oct. 25 (KRKO / WHL Live). The Tips open a two-game homestand on Friday, Nov. 1 against the Portland Winterhawks at 7:35 p.m. at Angel of the Winds Arena. Tickets for Hockey Happy Hour (Broad Stroke Associates) are now on sale at the link below, offering a ticket and beverage as low as $25.

Wolf and Boston Bilous traded high grade saves through the first two periods through a scoreless tie. First, Wolf had a breakaway save on Spencer Moe’s backhander in the first period. In the second period, Wolf turned away a Prince Albert flurry at the net with 11 minutes to go.

Goncalves ended the scoreless tie for a 1-0 lead at 4:45 of the third period when he stashed a loose puck off a blocked shot from the right goal post, set up by Fonstad. Max Patterson nearly put the Tips up 2-0, but missed an open net amidst a loose puck scramble. Wolf came back with a highlight reel, glove side save on Ozzy Wiesblatt with over a minute to play.

After Prince Albert called a time out, they hemmed the Tips in their own zone and Aliaksei Protas fed a tape-to-tape, cross-seam pass to Wiesblatt, who hammered a one-timer to the upper corner to tie the game with 13.9 seconds left on a six-on-five situation.

In overtime, the Raiders pushed the puck deep into the Tips zone but failed to materialize a high grade opportunity. Going back down ice, Gianni Fairbrother slipped a pass from the left boards to Gut in the slot, who shoved a snap shot past Bilous’ glove to send downtown Everett into bedlam for the victory.

Bilous made 24 saves for the overtime defeat.

NOTES: Scratched from the lineup were Braden Holt, Martin Fasko-Rudas, Jalen Price, and Conrad Mitchell … Goncalves’ goal ended a Tips scoreless drought of 110:18 against the Raiders … the Tips improved to 7-2 in October … Fonstad has 12 points in the last five games and has tallied a point in his first three Tips games … the Tips have won four straight meetings against Prince Albert in downtown Everett.