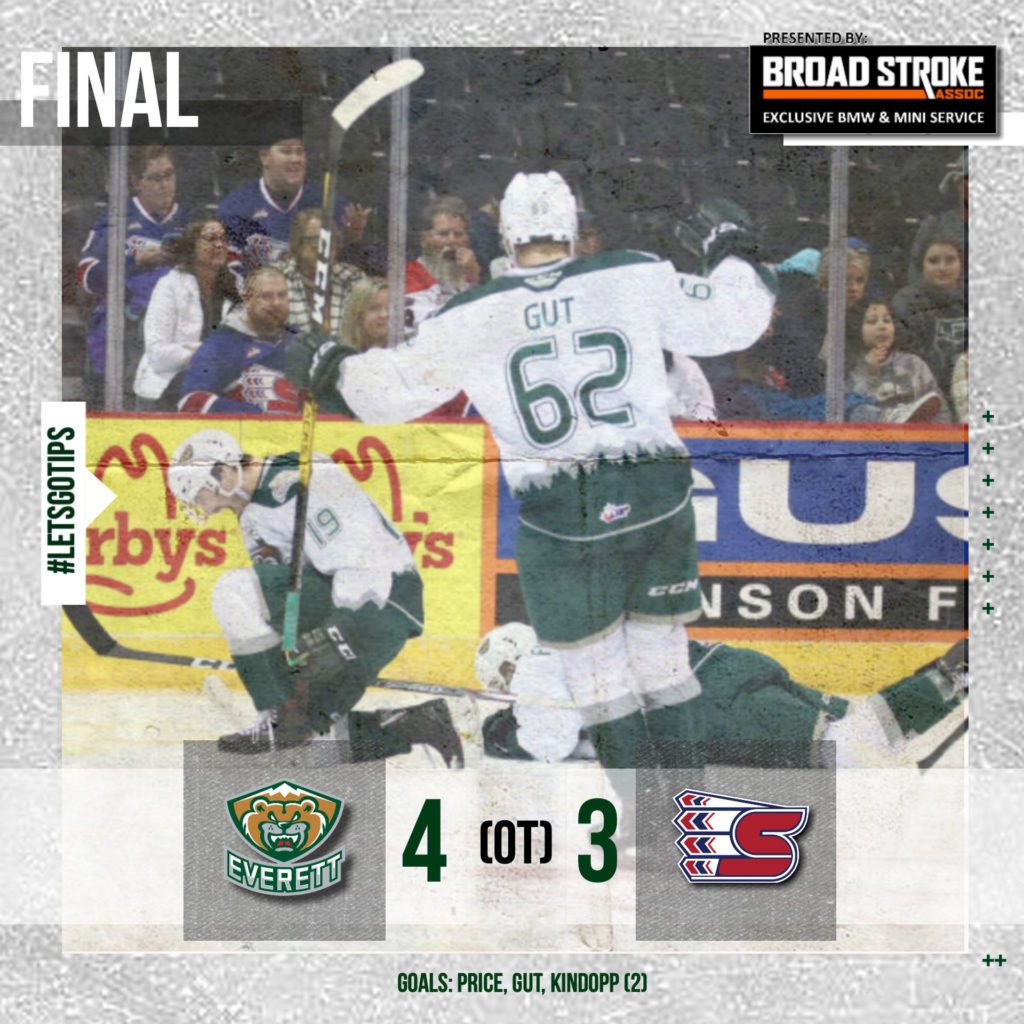 SPOKANE, Wash. – Bryce Kindopp scored two goals including a penalty shot goal at 1:23 of overtime to help lift the Everett Silvertips to a 4-3 overtime victory against the host Spokane Chiefs before 3,926 fans at Spokane Arena on Sunday.

UP NEXT: The Tips rest until Friday when they visit Spokane again at 7:05 p.m. (KKXA / WHL Live / Tips App). Their next home game is Nov. 16 against the Winnipeg ICE, 7:05 p.m. in downtown Everett. Tickets remain on sale, including the Chick-fil-A Fan 4 Pack, offering 4 tickets and sandwiches for as low as $56.

Jalen Price kick-started the scoring on a rebound goal at the net, on a delayed penalty, for a 1-0 Tips lead at 7:10. But Spokane would respond quickly – and do it twice during the game – when Adam Beckman’s deflection at the net tied the game just 35 seconds later for a 1-1 tie.

Michael King followed up with a rebound power play goal, glove side of Wolf, with 15 seconds left in the period and Spokane took a late first period lead into the dressing room at intermission time. The Tips closed the gap in shots at a tighter deficit, 13-11 in the second period, and after a Wolf breakaway save on Jack Finley, they capitalized on their first power play opportunity of the night.

Michael Gut took a Wyatte Wylie pass at the left circle and sought a deflection at the net. His pass deflected off Cordel Larson and past goaltender Lukas Parik, at 15:10 of the second period for a 2-2 tie.

In the third period, the Tips made an early bid to seize the game for good. Kindopp earned his first goal of the night on a rebound left in the crease at 5:51 for his 12th goal of the season, giving the Tips their second lead of the game. But on the next shift, Eli Zummack finished a cross-ice pass at the right circle and Spokane responded 17 seconds after Kindopp’s goal to tie the game, 3-3.

The Tips survived an opening shift of overtime, hemmed in their own zone, and then pounced on a Bobby Russell turnover. Kindopp stole the puck and got behind the defense on a breakaway, drawing contact from behind while attempting to unleash a shot on Parik.

Awarded a penalty shot, Kindopp made it count. He swung wide from the left wing and uncorked a snap shot past Parik from the left circle, sending the Silvertips off the bench to celebrate at 1:23 of overtime for the victory.

The Tips are now 7-0-1-1 in the last nine regular season visits to Spokane. Parik took the loss with 21 saves.