TIPS WIN // You Love to See It 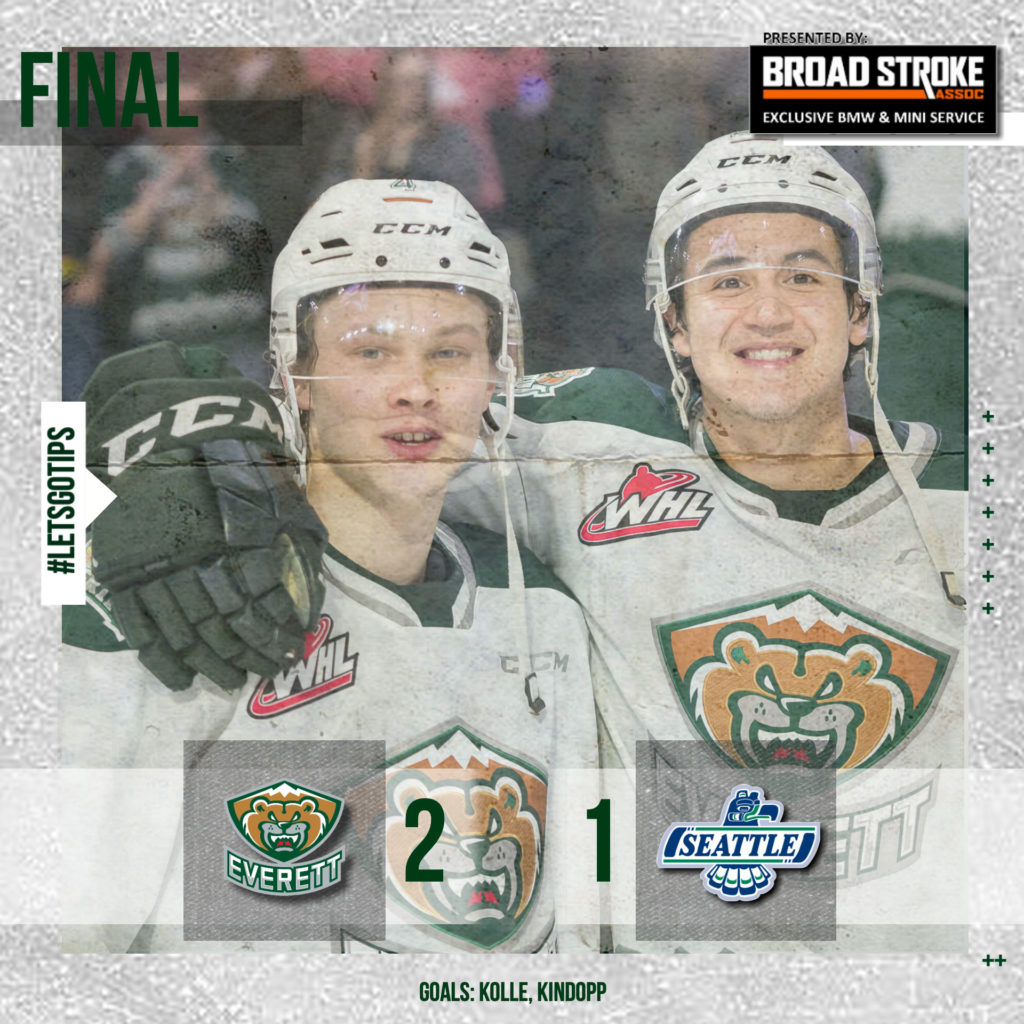 EVERETT, Wash. –  Dustin Wolf made 25 saves and Bryce Kindopp scored the eventual winner with 58.9 seconds left in the second to lift the Everett Silvertips to a WHL Playoff berth for the 17th straight season in a 2-1 victory over the Seattle Thunderbirds before a crowd of 7,983 at Angel of the Winds Arena in downtown Everett on Friday in WHL action.

The Tips continued their longest active playoff streak in the league and became the third team in the WHL to clinch a berth this season, improving to 9-1-1 in the last 11 games while securing the season series victory over Seattle, 6-2 with two matchups remaining. Ty Kolle scored his 17th goal of the season and the Tips power play went 1-of-4 in the victory.

UP NEXT:  The Tips return to play with another big U.S. Division showdown with the Portland Winterhawks, 7:05 p.m. on Saturday in downtown Everett (KRKO / Tips App / WHL Live). Tickets are on sale which also offer the Chick Fil-A Fan 4 Pack, with four tickets and Chick Fil-A sandwiches as low as $56 at the link below.

Ty Kolle went to the net and deflected his 17th goal of the season past Roddy Ross just 1:08 into the game for a 1-0 Tips advantage, setting the tone with a boisterous crowd elevated on the early tally. The Tips outshot Seattle 13-10 in the first period.

They followed by outshooting Seattle 9-3 in a sluggish second period and fell to a 1-1 tie at 10:53 when Matthew Rempe won a battle at the net and stashed his ninth goal of the season after Conner Roulette narrowly missed a centering attempt at the net.

The period hit a turning point when Lucas Ciona was whistled for delay of game for a malfunctioned clearing attempt toward the glass and the Tips power play took advantage. Jake Christiansen, carrying the puck down the right boards, found Cole Fonstad stationed in the right corner. Fonstad turned the pass quickly into the slot, to an awaiting Kindopp who smashed a one timer past Ross for a 2-1 Tips lead with 58.9 remaining.

The Tips hung onto their lead into the third period where Wolf was at his busiest, stopping 13 shots. Ross was pulled for an extra skater with less than three minutes left but the Thunderbirds failed to secure the tying goal, and the Tips manufactured the game ending clear with two seconds left.

Ross made 32 saves in the loss.