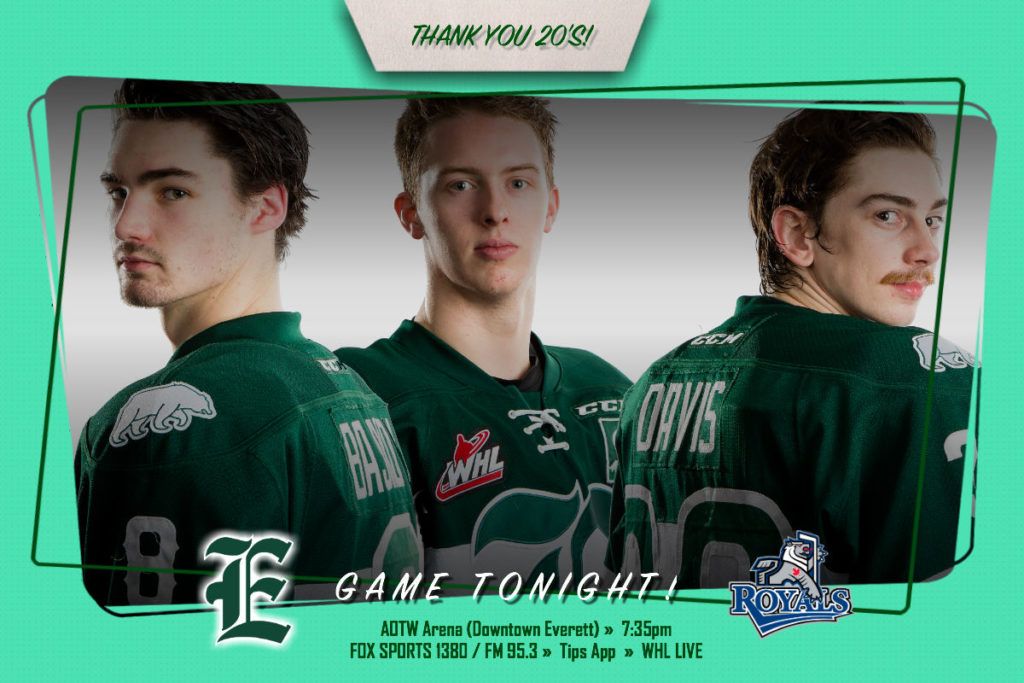 Final regular season home game for the Silvertips and the third matchup of four games between the teams for the regular season … tonight’s contest begins a “home-and-home” series spanning two days … the Tips are 1-1-0-0 this season against Victoria and are 28-14-3-3 lifetime against the Royals … the Silvertips will host “Jersey Off Our Back” and Team Awards ceremonies following the conclusion of the game … the Silvertips are 24-8-2-1 at home this season … a win tonight would equal their home victories total (25) from last season.

The Silvertips have a magic number of 3 to clinch the U.S. Division title.

The Silvertips hold a four-point lead for first place in the Western Conference and U.S. Division with 2 games to play.

The Silvertips have clinched a playoff berth for the 15th straight season, the longest current streak in the WHL and home ice advantage in the opening round.

IF THE PLAYOFFS BEGAN TODAY: The Silvertips would face the Seattle Thunderbirds in the first round.

LAST GAME (TC 4 – EVT 2 / 3-13-18): Jake Bean scored a goal and added an assist, while Morgan Geekie spearheaded a three-goal rally to get the Tri-City Americans past the Everett Silvertips, 4-2 before 2,799 fans at Toyota Center on Tuesday night. The Silvertips needed only two power play chances for two power play goals, scored back to back in the second period for their only lead of the night. Matt Fonteyne and Garrett Pilon each earned a goal, while Patrick Bajkov’s assist set a new Silvertips single season record with 94 points.

SUTTER SENT TO THE TOP

Riley Sutter skated in the CHL/NHL Top Prospects game in Guelph … was given a “B” listing among the NHL Central Scouting rankings for the 2018 NHL Entry Draft, (possible second or third round in the upcoming draft) … through 14 seasons, a total of 19 players through the Silvertips program have been selected in the NHL Entry Draft … a total of 17 Silvertips have advanced to play in the NHL … Sutter has reached a career high in goals (25).

TIPS IN THE NHL

Noah Juulsen (D) made his NHL debut Feb. 23 with the Montreal Canadiens vs. the New York Rangers … he became the 18th former Silvertip to suit up and play in the NHL … Juulsen was selected by Montreal in the first round in the 2015 NHL Entry Draft … he had 124 points and 149 penalty minutes in 240 career WHL games, all with the Silvertips.

CLIMBING THE LADDER
The Silvertips, ranking among the franchise all-time leaders: