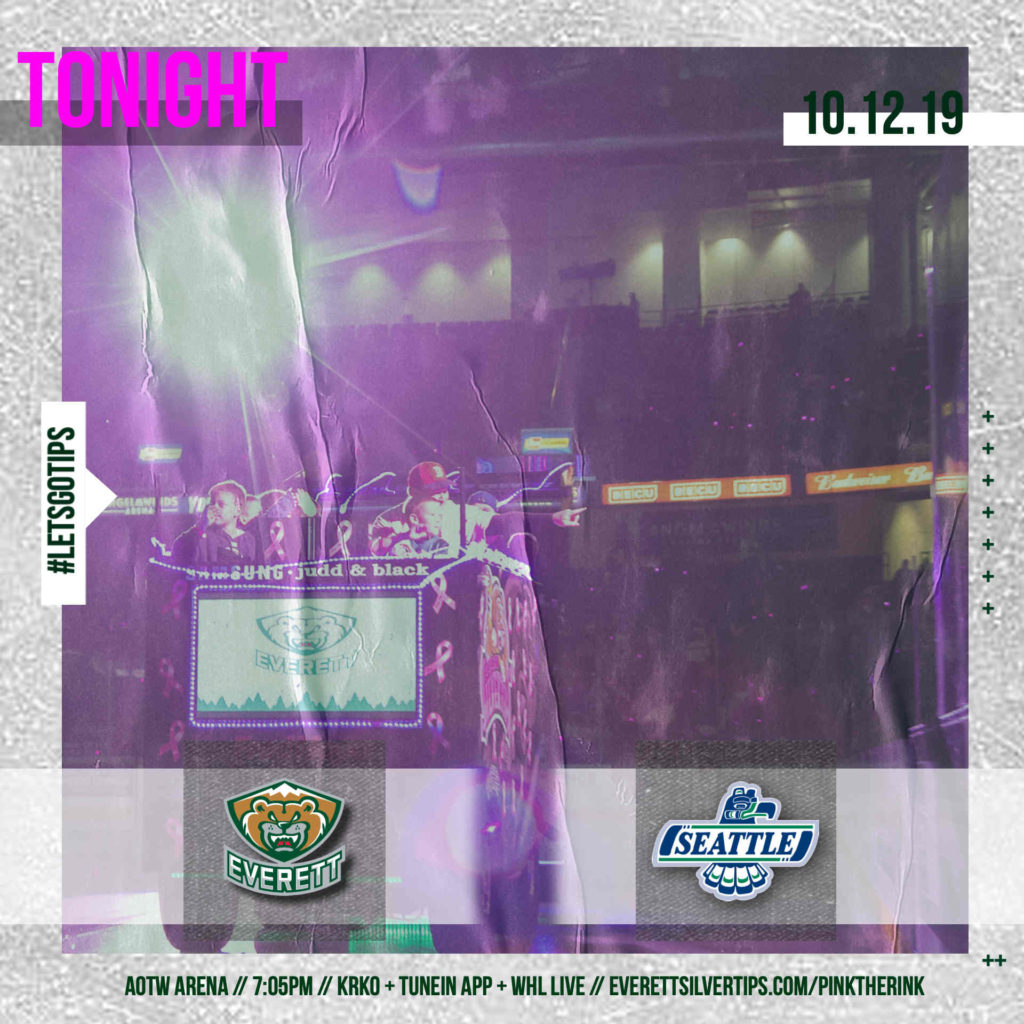 First of ten meetings … tonight’s event: Pink The Rink, designed to elevate fundraising for breast cancer awareness and treatment … the Silvertips have won five of the last six Pink The Rink Games and are 80-60-4-7-11 all-time against the Thunderbirds … tonight is the second game of a five-game homestand.

Get it now. LIMITED TICKETS AVAILABLE.

KAM 3 – EVT 1 (10-11-19):  Dylan Garand stopped 33 of 34 shots and Quinn Schmiemann’s go-ahead goal in the second period stood as the game winner to help lift the Kamloops Blazers over the Everett Silvertips, 3-1 before 3,571 fans at Angel of the Winds Arena on Friday night in WHL action. Brendan Lee scored for the third consecutive game and Dustin Wolf made 36 stops (second star of the game), while the Tips fell to only 11-2-1 to Kamloops over the last five years. Jackson Berezowski’s assist gave him points in five of six games this season.

DID YOU KNOW?
1) PINK THE RINK FACTS : Over $675,000 have been raised over the last ten seasons by the Silvertips and fans for breast cancer prevention and treatment through Pink The Rink … the Silvertips will wear specialty pink jerseys for the game, with 23 of 27 available game issued jerseys for the team successfully sold via pre-order by Saturday morning … remaining jerseys will be available via silent auction during Saturday’s game … a special pre-game ceremony will be held before the opening face-off … the Tips have gone 5-1-0-0 in the last six Pink The Rink games.
2) LEE-N AND MEAN: Tips first year forward Brendan Lee has a goal in three straight games … the native of Seattle, Wash. (Capitol Hill) scored just 3:28 into his Tips home debut … he has three goals on five shots, leading the WHL in shooting percentage (60.0).
3) WILLING TO 100: Silvertips head coach Dennis Williams is 6 wins away from 100 in his WHL career … he was behind the bench this summer for Team Canada, earning a silver medal at the Hlinka Gretzky Cup in Europe … Williams was named WHL Western Conference Coach of the Year in 2017-18.