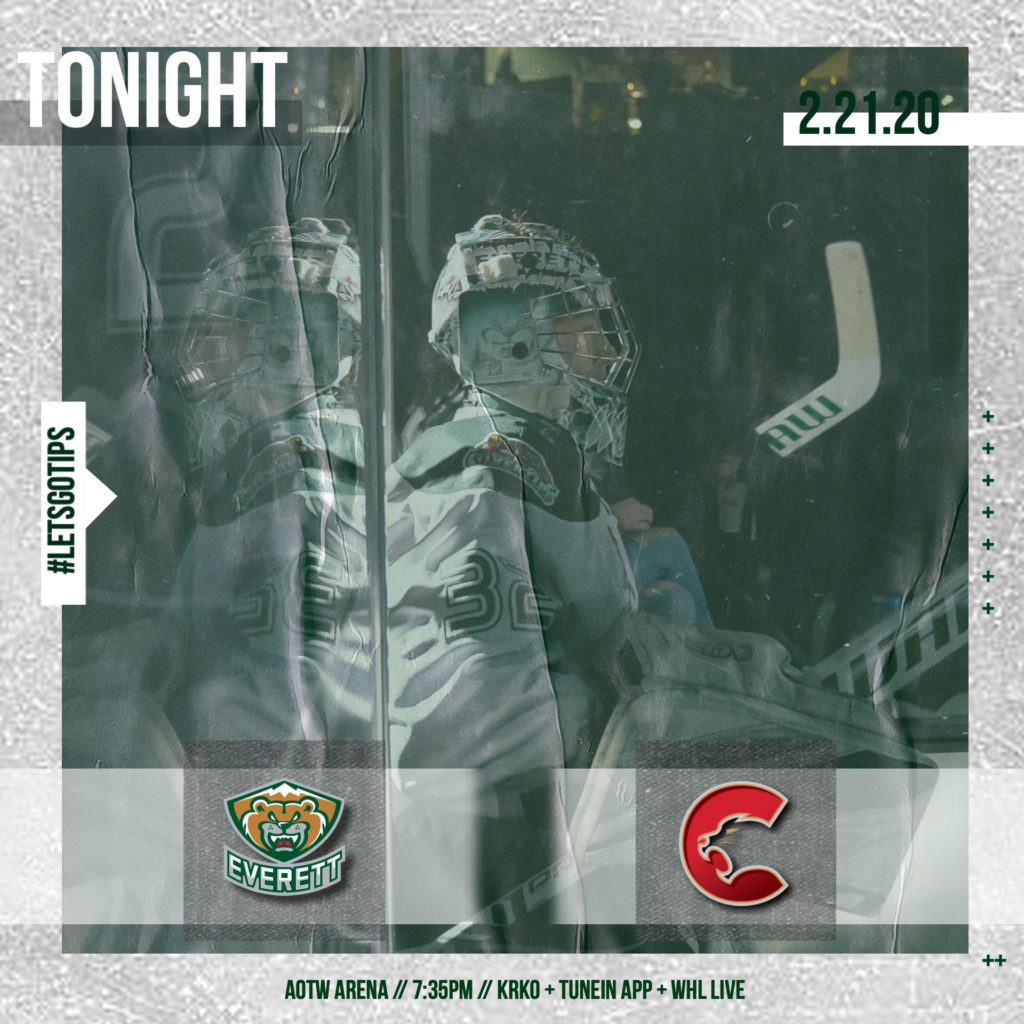 Final matchup and fourth of the regular season … fourth game (3-0-0-0) in a five-game homestand for the Silvertips … the Silvertips are 11-3-0-1 in the last five years against Prince George … the Silvertips hold a record of 10-4-0-0 against teams from the B.C. Division this season … six players between both rosters are ranked by NHL Central Scouting’s midterm rankings entering tonight’s game.

THIS SEASON AGAINST THE COUGARS:

LAST TIME OUT:
EVT 6 – MJ 0 (2-19-20): Ty Kolle scored a pair of goals and Ronan Seeley racked up three points to help the Everett Silvertips crush the Moose Jaw Warriors in a 6-0 victory before 3,724 fans at Angel of Winds Arena on Wednesday in WHL action. The Tips improved to 11-1-1 in the last 13 games, extending their season long home winning streak to seven straight games. Dustin Wolf only had to make 10 saves in net to earn his 20th career WHL shutout, tied for fifth in WHL history with Dustin Slade and Justin Pogge – he is also one shutout away from tying Leland Irving’s 21 shutouts, 2nd all time in Tips history.
SHOTS: EVT 42 | MJ 10

DID YOU KNOW?
1) FONSTAD-Y AS HE GOES: Cole Fonstad is third in assists (51) … his 64 points in 50 games, are tied for 12th WHL scoring … his 60 assists in the calendar year of 2019 were 2nd in the WHL, trailing Eli Zummack of Spokane by three.
2) THE DEFENSE NEVER RESTS: Wyatte Wylie (52 points, 4th) and Jake Christiansen (17 goals, 2nd) rank among the league leaders among defensemen … Kasper Puutio earned his first Silvertips goal Feb. 8 at Seattle … Olen Zellweger earned a multi point game last Feb. 7 at Tri-City … Christiansen needs one more goal to set a new record for most goals by a Tips d-man in one season (Landon Oslanski set the record in 2012-13).
3) HUNGRY LIKE THE WOLF: Tips goaltender Dustin Wolf ranks among the WHL leaders in the following categories: 1st in goals against average (1.86), 1st in save percentage (.938), 2nd in wins (28), 1st in shutouts (9) … he has 20 career shutouts, tied 5th all time (19) with Dustin Slade and Justin Pogge … his next shutout (21) will tie him for 3rd in WHL history, all-time with Leland Irving (2nd, Tips history) and Bryan Bridges.