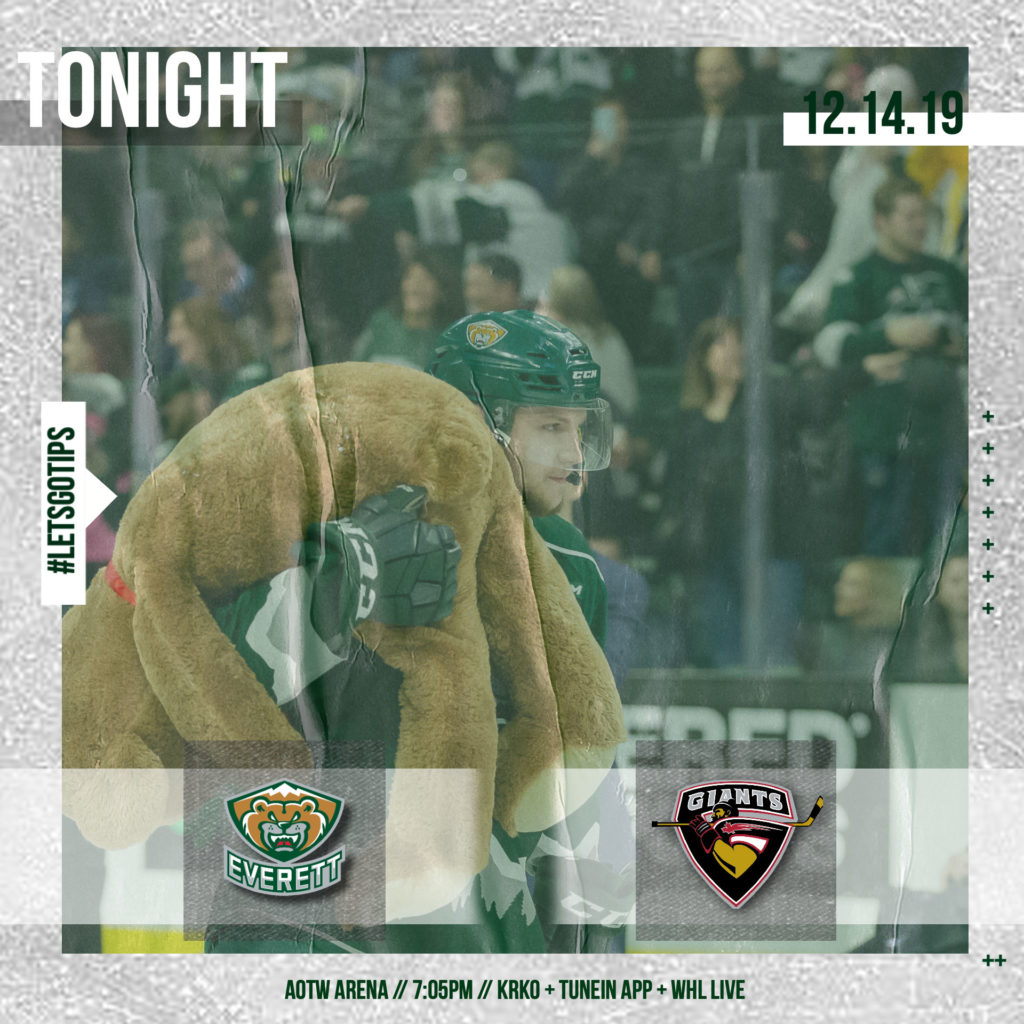 Second of four meetings this season … the Tips will host Teddy Bear Toss tonight, inviting all fans in attendance to throw stuffed animals onto the ice when the Silvertips score their first goal of the game… the Tips are 3-1 when hosting Teddy Bear Toss over the last four seasons … the Tips are 53-36-4-1 all-time against the Giants … a total of 9 players combined between both rosters have been selected in the NHL Draft … the Silvertips will open a four-game homestand tonight.

TEDDY BEAR TOSS: The Silvertips return Teddy Bear Toss presented by ACE Hardware, where upon the first goal scored by the Silvertips in the game, all fans in attendance are encouraged to throw new or gently used stuffed animals onto the ice to be collected and distributed with local charitable support to underprivileged families and children in the region during the holiday season. The Silvertips Teddy Bear Toss, renewed for the fifth straight season, is designed to collect new or gently used stuffed animals to donate to support the Christmas House organization and Seattle Children’s Hospital along with distribution assistance from WARM 106.9’s Teddy Bear Patrol.

Fans bringing stuffed animals to the game, for Teddy Bear Toss are strongly encouraged to wrap stuffed animals in plastic bagging for efficient ice maintenance. Wrapping stations will also be available along the concourse of Angel of the Winds Arena.

LAST TIME OUT:
POR 3 – EVT 2 (OT) (12-13-19): Justyn Gurney and Bryce Kindopp scored a pair of early goals but the overtime winner by Reece Newkirk completed a comeback for the Portland Winterhawks, 3-2 in overtime over the Everett Silvertips before 6,105 fans at Moda Center on Friday in WHL action. The Tips finished a five game road swing at 4-0-1, earning 33 saves in net from Dustin Wolf while Kindopp’s goal gave him 10 points in the last five games. Jaydon Dureau tied the game with 56 seconds remaining in regulation while the Tips killed off three penalties in regulation, before Newkirk’s goal, scored on a four-on-three situation.
SHOTS: EVT 26 | POR 36

DID YOU KNOW?
1) TOSS UP: The Tips are 3-1 when hosting Teddy Bear Toss since the event returned to downtown Everett in 2015-16 … they have scored their 1st goal of the game in three of four seasons … Martin Fasko-Rudas eanred last season’s event goal in the first period against Seattle.
2) THREE’S COMPANY The Tips are at #4 in the CHL Top-10 poll, released Wednesday … they have won 19 of their last 25 games … they are 11-2-2-0 in one-goal games and 13-0-2-0 when leading after two periods this season.
3) CAN DO KINDOPP: Tips captain Bryce Kindopp leads the club with 21 goals … he owns 10 points in the last 5 games … he is nine goals away from surpassing Connor Dewar for fifth all-time in Silvertips goals.

Did you know? The Tips have helped collect and donate over 34,700 stuffed animals to underprivileged kids locally since 2015-16 through Teddy Bear Toss. Last season, they set a new franchise record with 9,719 stuffed animals donated.