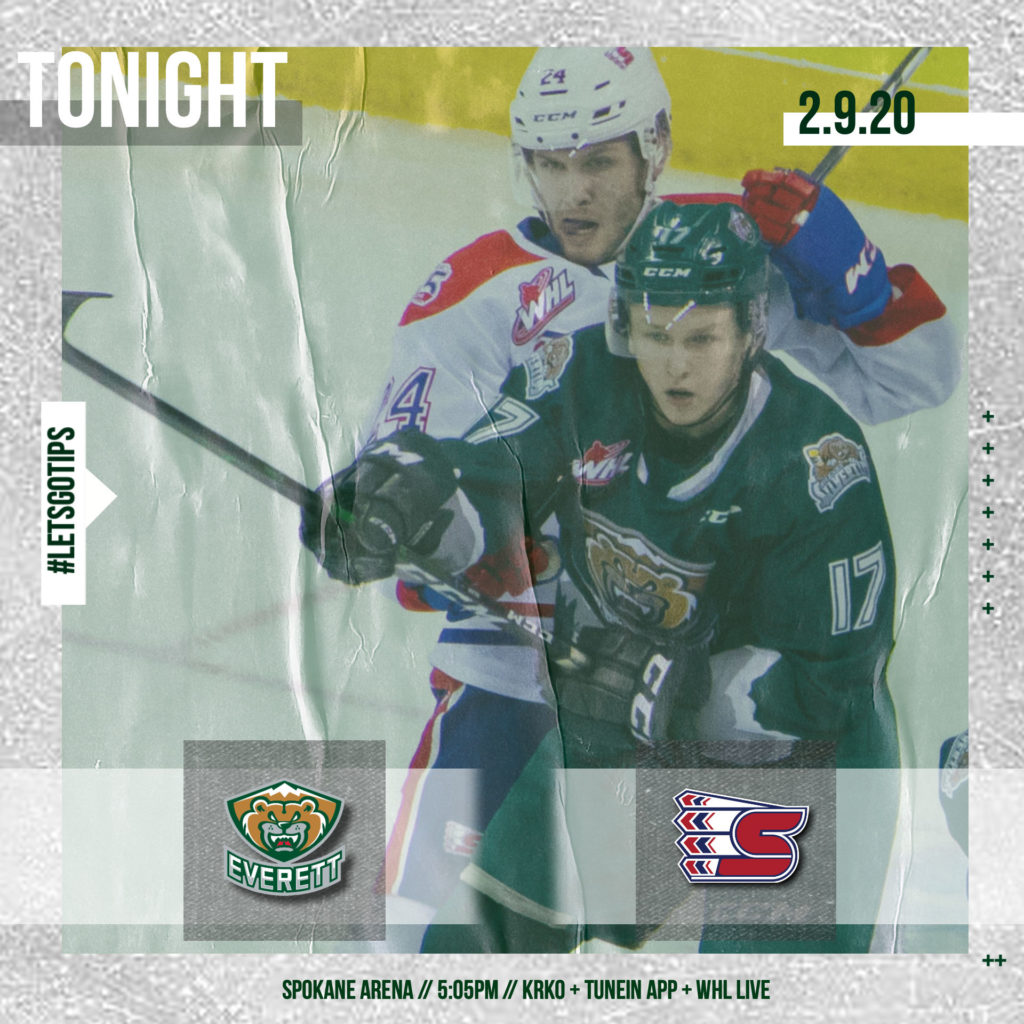 Final meeting out of nine meetings this season … the Silvertips conclude three games in three days (2-0-0-0) today … they are 7-0-1-0 this season against Spokane and all-time, are 77-58-1-9-4 against the Chiefs … the Tips are 17-5-2-0 against opponents from the U.S. Division … today’s game has a total of six players from both rosters ranked by NHL Central Scouting (midterm) … a total of eight players from both rosters have been selected in the NHL Entry Draft.

LAST TIME OUT:
EVT 5 – SEA 2 (2-9-20): Jake Christiansen deposited two goals with four points, Dustin Wolf had 23 saves in net and the Everett Silvertips broke a tie game in the second period with three unanswered goals, enough to defeat the Seattle Thunderbirds 5-2 in front of 6,190 fans at the accesso ShoWare Center in Kent. The Tips won their fifth straight and eight in the last nine games (8-0-1), taking their fifth win in seven meetings against the Thunderbirds. Kasper Puutio scored his first goal as a Silvertip while Cole Fonstad earned a goal and two assists against the Thunderbirds, earning 10 points to date in the season series. In the last three wins in the series, the Tips have outscored Seattle 15-2.
SHOTS: EVT 34 | SEA 29

DID YOU KNOW?
1) FONSTAD-Y AS HE GOES: Cole Fonstad is second in assists (49) … his 62 points in 46 games, are tied for 9th WHL scoring … his 60 assists in the calendar year of 2019 were 2nd in the WHL, trailing Eli Zummack of Spokane by three.
2) THE DEFENSE NEVER RESTS: Wyatte Wylie (4th, 47 points) and Jake Christiansen (3rd, 15 goals) rank among the league leaders among defensemen … Kasper Puutio earned his first Silvertips goal on Saturday at Seattle … Olen Zellweger earned a multi point game on Friday at Tri-City.
3) HUNGRY LIKE THE WOLF: Tips goaltender Dustin Wolf ranks among the WHL leaders in the following categories: 1st in goals against average (1.90), 1st in save percentage (.938), 3rd in wins (25), 1st in shutouts (8) … he has 19 career shutouts, tied 7th all time (19) with Kelly Guard and Darcy Kuemper … his next shutout (20) will tie him for 5th in WHL history, all-time with Dustin Slade and Justin Pogge.