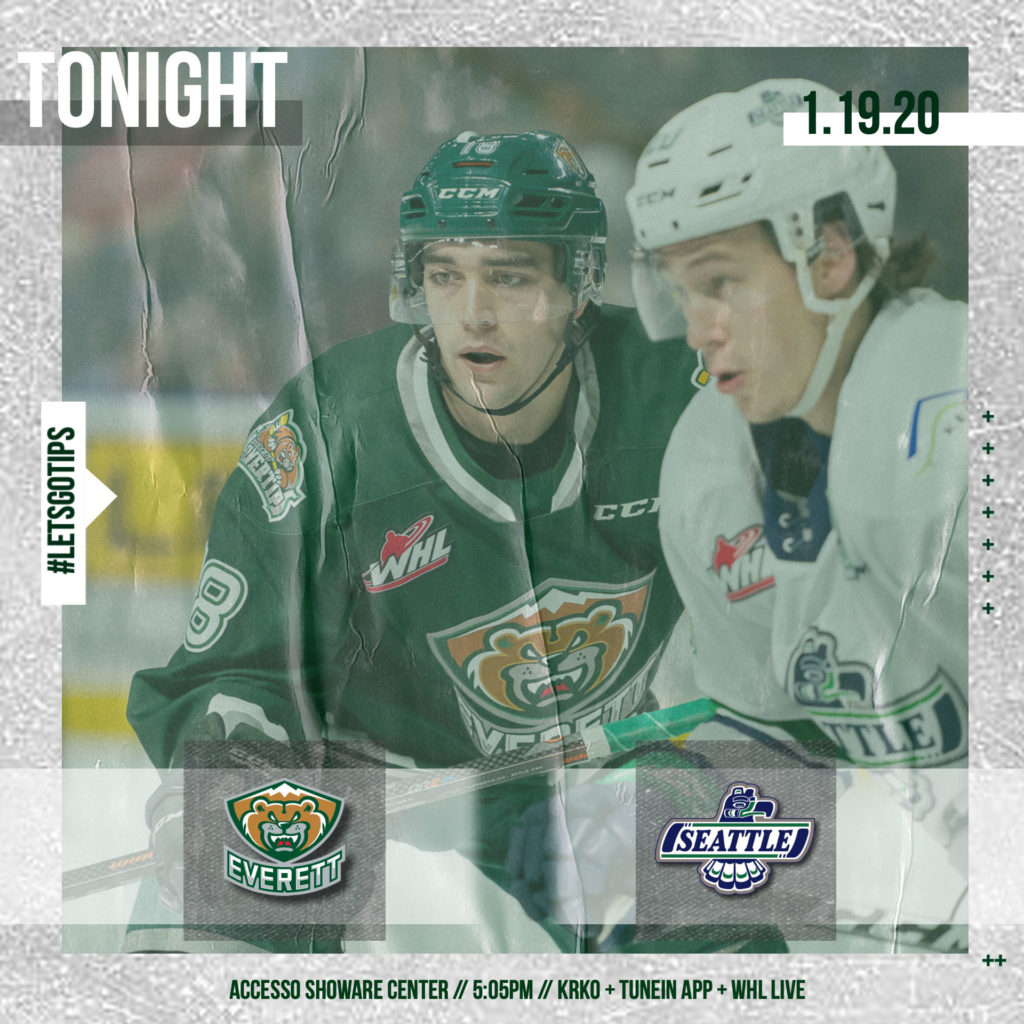 Sixth of ten meetings … the Tips are 84-62-4-7-10 all-time against Seattle … the Silvertips hold a record of 12-5-1-0 against opponents from the U.S. Division … opener of a three-game road trip … the Tips are 1-1 this season in Kent, Wash … three of five meetings this season have been decided by one goal … the Silvertips will next face the Thunderbirds in Kent, Feb. 8.

LAST TIME OUT:
EVT 8 – SEA 0 (1-18-20): Jackson Berezowski recorded a career high four points (1g-3a) while Dustin Wolf made 14 saves for his 17th career WHL shutout, as the Everett Silvertips cruised to an 8-0 victory over the Seattle Thunderbirds before a sellout crowd of 8,319 on Saturday in downtown Everett at Angel of the Winds Arena in WHL action. The Tips tied a franchise record for most goals in a game against Seattle, previously set in an 8-4 win on Feb. 16, 2008 and had seven players record multi point games. Ty Kolle and Hunter Campbell, each acquired by the Silvertips earlier this month, recorded their first goals in a Silvertips jersey while the Tips set a new season high for most goals in a game.
SHOTS: EVT 43 | SEA 14

DID YOU KNOW?
1) FONSTAD-Y AS HE GOES: Cole Fonstad is 2nd in WHL assists (42) … he has 52 points in 39 games, tied for 9th in WHL scoring … his 60 assists in the calendar year of 2019 were 2nd in the WHL, trailing Eli Zummack of Spokane by three.
2) CAN DO KINDOPP: Tips captain Bryce Kindopp is third in WHL goals (30) this season… he’s scored 30 goal plateau for the second straight year … he is tied for 4th in Tips history with 100 goals (Josh Winquist).
3) PUGET SOUND PROUD: The Tips have four players on tonight’s roster hailing from the state of Washington: Wyatte Wylie (Everett), Hunter Campbell (Everett), Brendan Lee (Seattle), and Dawson Butt (Buckley) … both Wylie and Campbell grew up in Everett, Wash. while Campbell and Butt are products of the Junior Silvertips program.