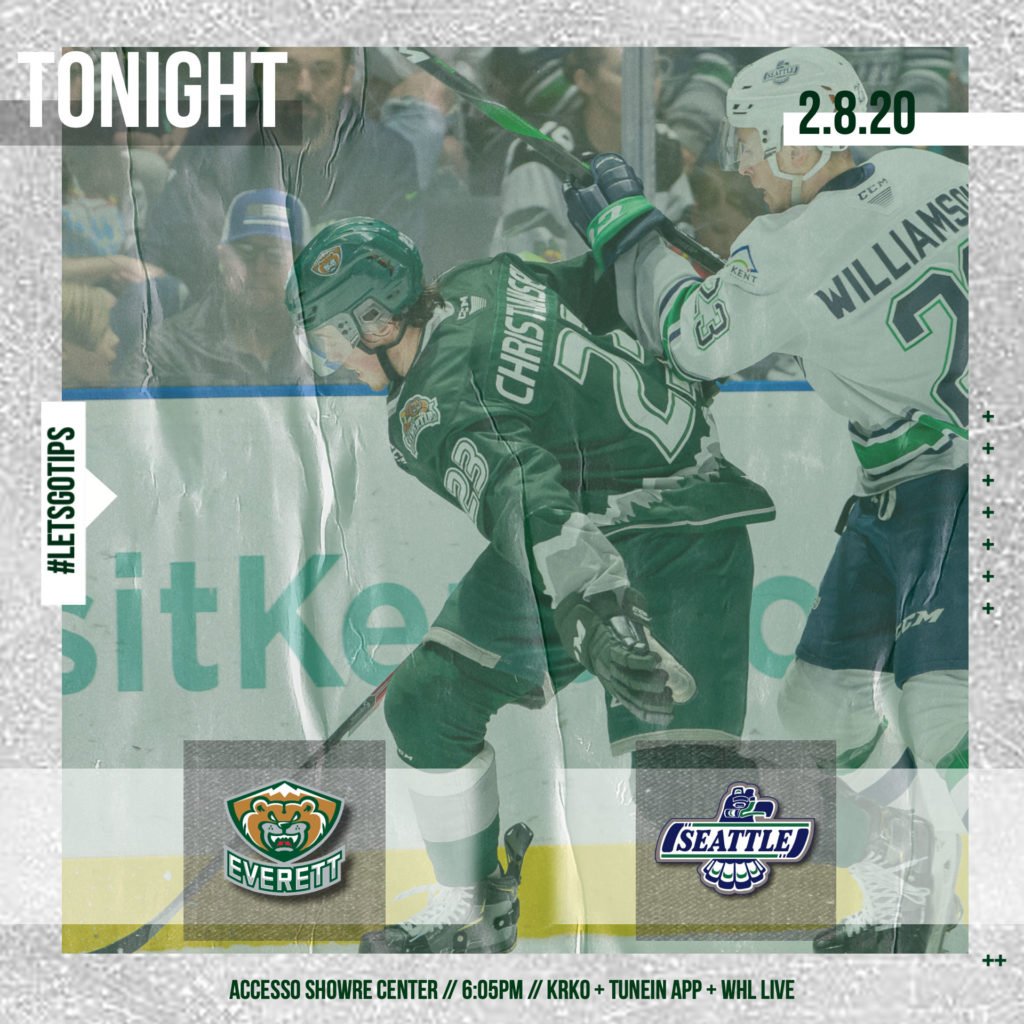 LAST TIME OUT:
EVT 5 – TC 0 (2-7-20): With seven days in between games, the Everett Silvertips were well-rested coming into Friday’s battle with the Tri-City Americans. With 3,558 in attendance at the Toyota Center in Kennewick, the Silvertips defeated the Americans 5-0 on scattered scoring across the lineup sheet as Everett secured two important points over a US Division rival. Dustin Wolf earned his league leading 8th shutout of the season and 19th of his career on 18 saves, moving into a tie for 7th in WHL history with Kelly Guard and Darcy Kuemper. Jake Christiansen earned first star  honors with a goal and an assist while the Tips moved to 7-0-1 in the last eight games.
SHOTS: EVT 36 | TC 18

DID YOU KNOW?
1) FONSTAD-Y AS HE GOES: Cole Fonstad is tied for second in assists (47) … his  59 points in 45 games, are 13th in WHL scoring … his 60 assists in the calendar year of 2019 were 2nd in the WHL, trailing Eli Zummack of Spokane by three.
2) CAN DO KINDOPP: Tips captain Bryce Kindopp is third in WHL goals (32) this season… he’s reached the 30 goal plateau for the second straight year … he is third in Tips history with 102 goals and needs five more to tie Tyler Maxwell for second, all-time Silvertips.
3) HUNGRY LIKE THE WOLF: Tips goaltender Dustin Wolf ranks among the WHL leaders in the following categories: 1st in goals against average (1.92), 1st in save percentage (.937), 3rd in wins (24), 1st in shutouts (8) … he has 19 career shutouts, tied 7th all time (19) with Kelly Guard and Darcy Kuemper … his next shutout (20) will tie him for 5th in WHL history, all-time with Dustin Slade and Justin Pogge.