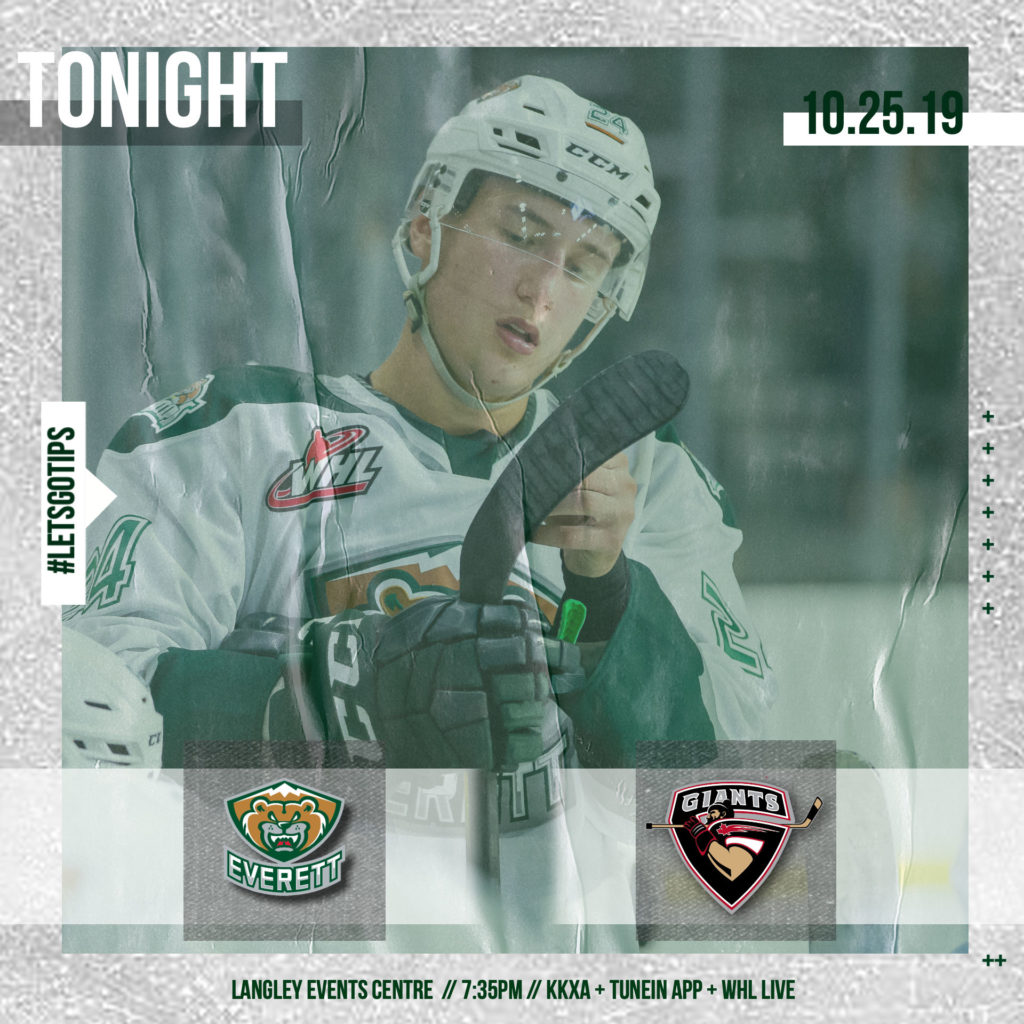 First of four meetings this season … first meeting in Langley, British Columbia since Dec. 14, 2018 (Tips won, 4-1) … Silvertips are 52-36-4-1 lifetime against Vancouver and 24-22-3-0 in road games against the Giants … the Tips have won seven of eight games and are ranked as an honorable mention for the CHL Top 10 …  rematch of the first and second place teams from last season in the Western Conference standings … a total of 9 players combined between both rosters have been selected in the NHL Entry Draft … the two teams have each won the Western Conference title in the last two seasons.

LAST SEASON AGAINST THE GIANTS:

EVT 2 – PA 1 (OT) (10-19-19): Michal Gut scored his third game winning goal of the season, 1:38 elapsed on a snap shot past Boston Bilous to lift the Everett Silvertips to a thrilling 2-1 overtime victory over the Prince Albert Raiders before 5,107 fans at Angel of the Winds Arena in downtown Everett on Saturday in WHL action. The Silvertips finished their five game homestand at 4-1, extending their lead for first place in the U.S. Division after winning for the seventh time in eight games. Gage Goncalves broke the scoreless tie in the third period, extending his goal scoring streak to four games, while Dustin Wolf turned in a 30 save effort to fend off a Prince Albert rally in the final minute of regulation.

DID YOU KNOW?
1) ROLLIN’ OLEN: Tips defenseman Olen Zellweger will skate for Team Canada (RED) in the World U17 Hockey Challenge, opening Nov. 2 in a seven day tournament held in Swift Current and Medicine Hat … he will be joined among the Team Canada squads with Silvertips goaltending coach James Jensen.
2) HOWLING GOOD TIME: Tips goaltender Dustin Wolf, last Saturday earned his 13th career shutout, surpassing Michael Wall for third all-time in Silvertips history … he is third with a .945 save percentage and is tied for the WHL lead in shutouts (2) this season … his current lifetime save percentage of .935 is #1 in Silvertips all-time history.
3) WILLING TO 100: Silvertips head coach Dennis Williams is 2 wins away from 100 in his WHL career … he was behind the bench this summer for Team Canada, earning a silver medal at the Hlinka Gretzky Cup in Europe … Williams was named WHL Western Conference Coach of the Year in 2017-18.