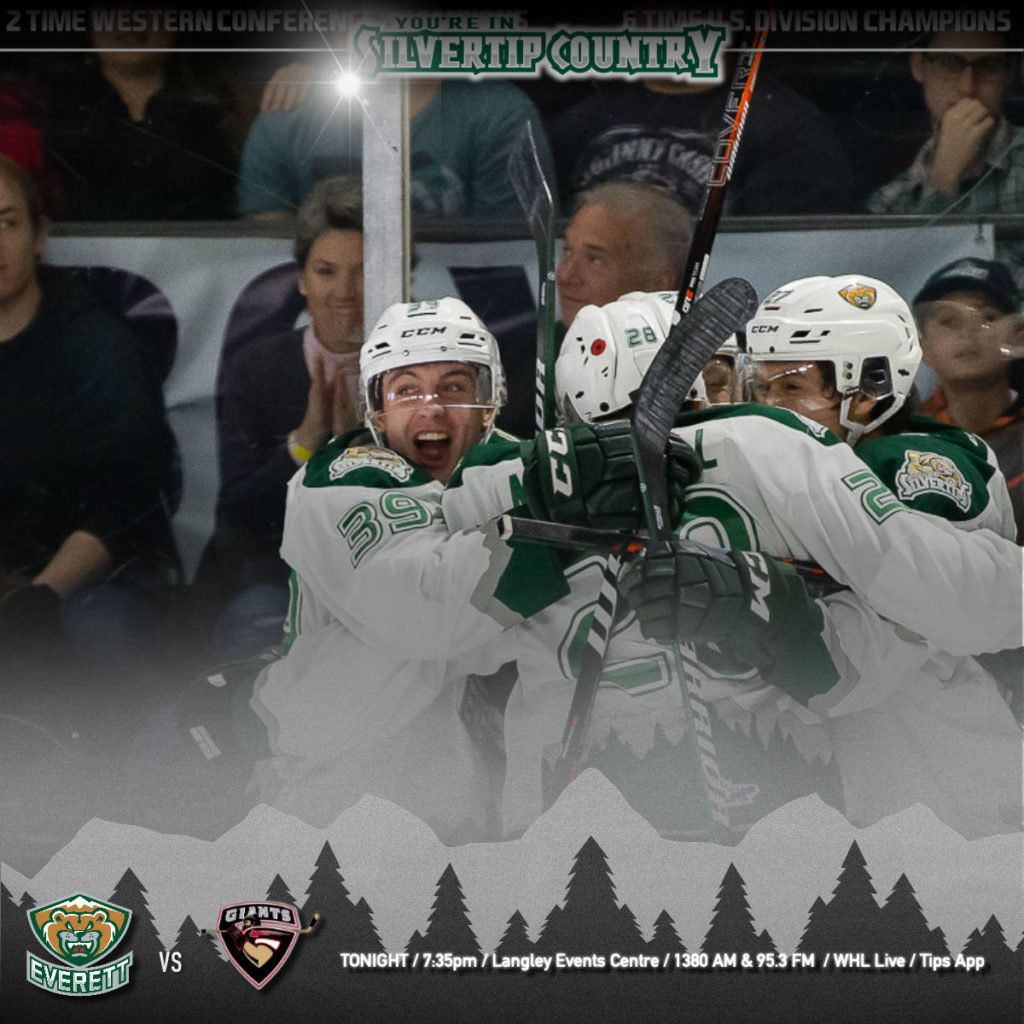 The Silvertips battle the Vancouver Giants in the fourth and final meeting of the season … the Tips are closing a set of back to back road games … it’s their first matchup since Nov. 17, the a 6-5 victory for the Silvertips in downtown Everett … the two teams own first place in their respective divisions, while the Tips’ 52 points are second most in the WHL and Vancouver is third, with 44 points … the Tips are 51-36-4-1 in 92 lifetime meetings with the Giants … the Tips are 22-21-3 on the road all-time against Vancouver … their last road win in Vancouver was Mar. 4, 2018 (6-1 win).

LAST TIME OUT:
SPO 4 – EVT 3 (SO) (12-12-18): The Spokane Chiefs needed only a pair of goals in the first two rounds to sneak past the Everett Silvertips, 4-3 in a shootout, ending the Silvertips nine-game winning streak before 2,901 fans at Spokane Arena on Wednesday in WHL action. The Tips, by forcing overtime, actually extended a streak of going unbeaten in regulation to 10-0-2 and scored three times on the power play. Connor Dewar, Max Patterson, and Bryce Kindopp scored goals for the Silvertips, while Wolf helped force the shootout with 32 saves.

The Silvertips will make their home ice at A.O.T.W. Arena the host venue for USA Hockey’s training camp for the upcoming 2019 IIHF World Junior Championships … Team USA – unveiling their preliminary roster on Dec. 5 – will include Jack Hughes (projected #1 overall pick in the upcoming NHL Draft) and skate in downtown Everett between Dec. 14-18, showcasing a collection of the top end U.S. born players under 20 years of age … all practices starting at 11am this Saturday will be open to the public.

The Silvertips will host the Seattle Thunderbirds on Saturday, Dec. 15 for Teddy Bear Toss at 7:05 p.m. at AOTW Arena … NHL Seattle Senior Adviser Dave Tippett is scheduled to participate in the pre-game ceremonial puck drop … on Dec. 4, the National Hockey League granted expansion to the city of Seattle, Wash. as the league’s 32nd team, scheduled to begin play in the 2021-22 season … during the pre-game ceremony, the Tips and fans will salute Tippett and the NHL Seattle organization in recognition of the newest franchise to join the NHL.