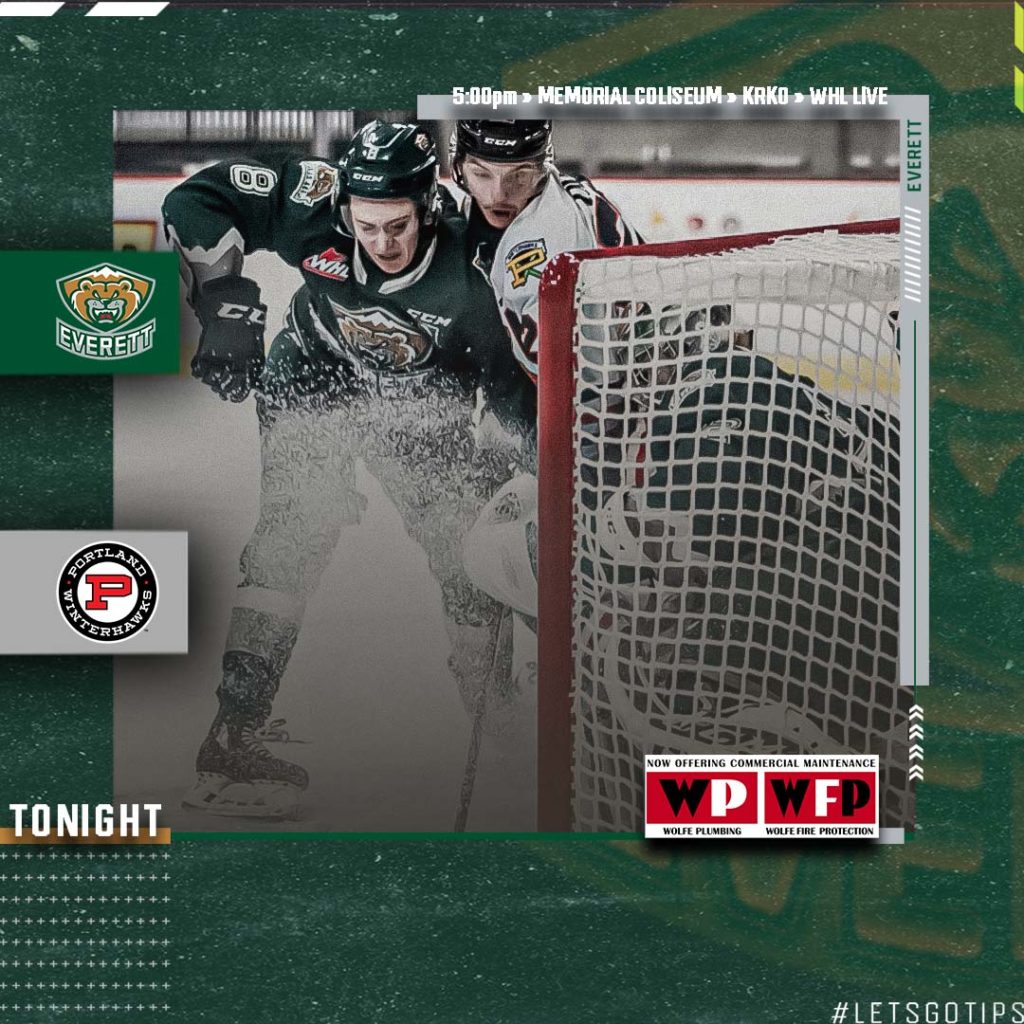 DIVISION TITLE CHASE: The Silvertips lead the U.S. Division with a record of 15-3-0-0 (30 points) and a .833 percentage…. They can clinch their 8th U.S. Division title in franchise history tonight with a victory at Portland.

DID YOU KNOW?
1) HUNGRY LIKE THE WOLF: Tips’ goaltender Dustin Wolf – the recipient of the WHL Goaltender of the Month award for March – ranks among the WHL leaders in the following categories: tied for 1st in wins (14), 3rd in goals against average (1.69), 2nd in save percentage (0.944), tied for 1st in shutouts (4) … he has 24 career shutouts, moving into sole possession of 2nd place on the WHL and Silvertips all-time list, ahead of Leland Irving and Seattle’s Bryan Bridges. He is three behind the league record shared by former teammate Carter Hart and Vancouver’s Tyson Sexsmith. Wolf broke the team’s franchise record for longest shutout streak of 195:12 on Mar. 26th @ POR, surpassing Carter Hart in franchise history for longest stretch without allowing a goal.
2) THE DEFENSE NEVER RESTS: The Silvertips as a team hold the second-best goals against average mark in the WHL as the club has surrendered under two goals against per game, only 33 goals against in 18 contests. Defensive leaders Gianni Fairbrother and Oleg Zellweger have impressive numbers on both ends of the score sheet. Fairbrother has recorded 15 points (1g-14a) to go along with a plus-10 rating while Zellweger has totaled 13 points (2g-11a) in 11 games played. Carolina Hurricanes prospect Ronan Seeley has chipped in with 13 points (4g-9a) and an impressive plus-15 rating while playing in every game this year.
3) FUN WITH FONSTAD: Team captain Cole Fonstad has recorded a point in 10 consecutive games continuing his productive season for the Silvertips. He now has 275 points for his WHL career and presently leads the club with 28 points (13g-15a) to go along with a stellar plus-17 mark.

LAST TIME OUT:
EVT 5 – SEA 2 (4-28-21): – The Everett Silvertips extended their winning streak to a season-best six in a row after conquering the Seattle Thunderbirds by a score of 5-2. Silvertips forward Jacob Wright got Everett off to an early lead, netting his eighth goal of the season just 1:16 into the opening frame while rookie blue liner Ty Gibson recorded his first career WHL goal. Ronan Seeley was an anchor for the Silvertips as the defenseman earned a plus-4 rating while also posting a big night offensively, racking up two goals and an assist to claim first star honors.
SHOTS: EVT 25 | SEA 31