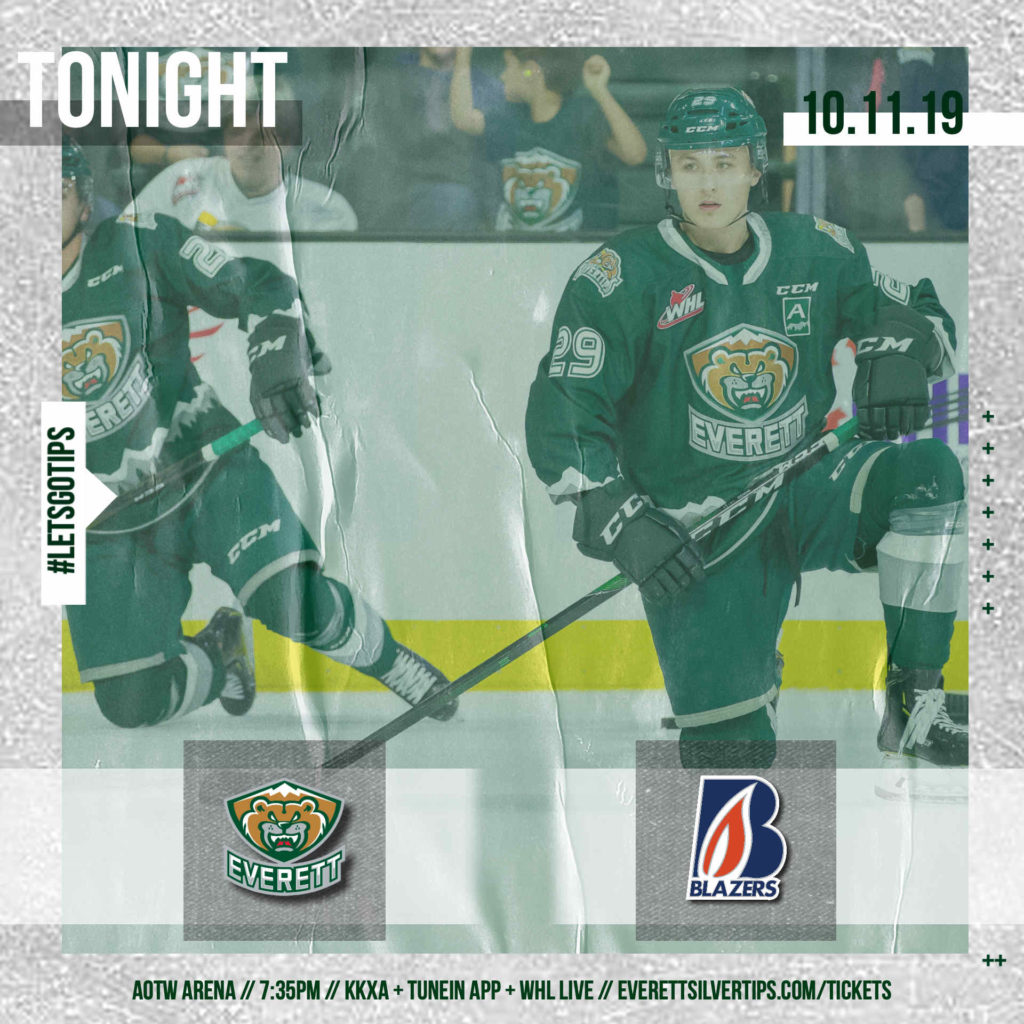 Second of four meetings with the Blazers … the Silvertips open a five-game homestand tonight after completing a four-game road swing at 3-1-0-0 … the Silvertips went 15-4-0-1 last season against opponents from the B.C. Division (3-1 this season) … the Tips are 11-1-1-0 in the last five years against the Blazers, including a 4-0-0-0 in last year’s regular season series … their next meeting will be in downtown Everett, Nov. 2.

LAST TIME OUT:
EVT 3 – VIC 2 (10-9-19): Jackson Berezowski snapped a tie game with 4:09 left for his third goal of the season to lift the Everett Silvertips to a 3-2 victory over the host Victoria Royals before 3,687 fans on Wednesday at Save-On-Foods Memorial Centre in WHL action. The Silvertips pushed their win streak to three consecutive games and finished a four game trip at 3-1-0-0, ascending to a tie for first place in the U.S. Division with the Portland Winterhawks. Bryce Kindopp earned his league leading eighth goal of the season and the 42nd multi point game of his career, while Dustin Wolf turned in a 31 save effort for the win.

DID YOU KNOW?
1) VICTORIOUS VOYAGE : The Silvertips completed a four-game road trip at 3-1-0-0, winning the final three games of the stretch … following a 5-1 defeat to Kelowna on Sept. 28, the Tips won all three games by one goal and outscored the opposition, 3-0 in the third period.
2) NHL CENTRAL SCOUTING RADAR: Tips forward Michal Gut and defenseman Ronan Seeley were named to the NHL Central Scouting “players to watch” preliminary rankings (both: C ranking) ahead of the 2020 NHL Draft in Montreal … Gut’s five assists are tied for the WHL rookie lead … Seeley has a pair of assists and a +2 rating in six games.
3) WILLING TO 100: Silvertips head coach Dennis Williams is 6 wins away from 100 in his WHL career … he was behind the bench this summer for Team Canada, earning a silver medal at the Hlinka Gretzky Cup in Europe … Williams was named WHL Western Conference Coach of the Year in 2017-18.