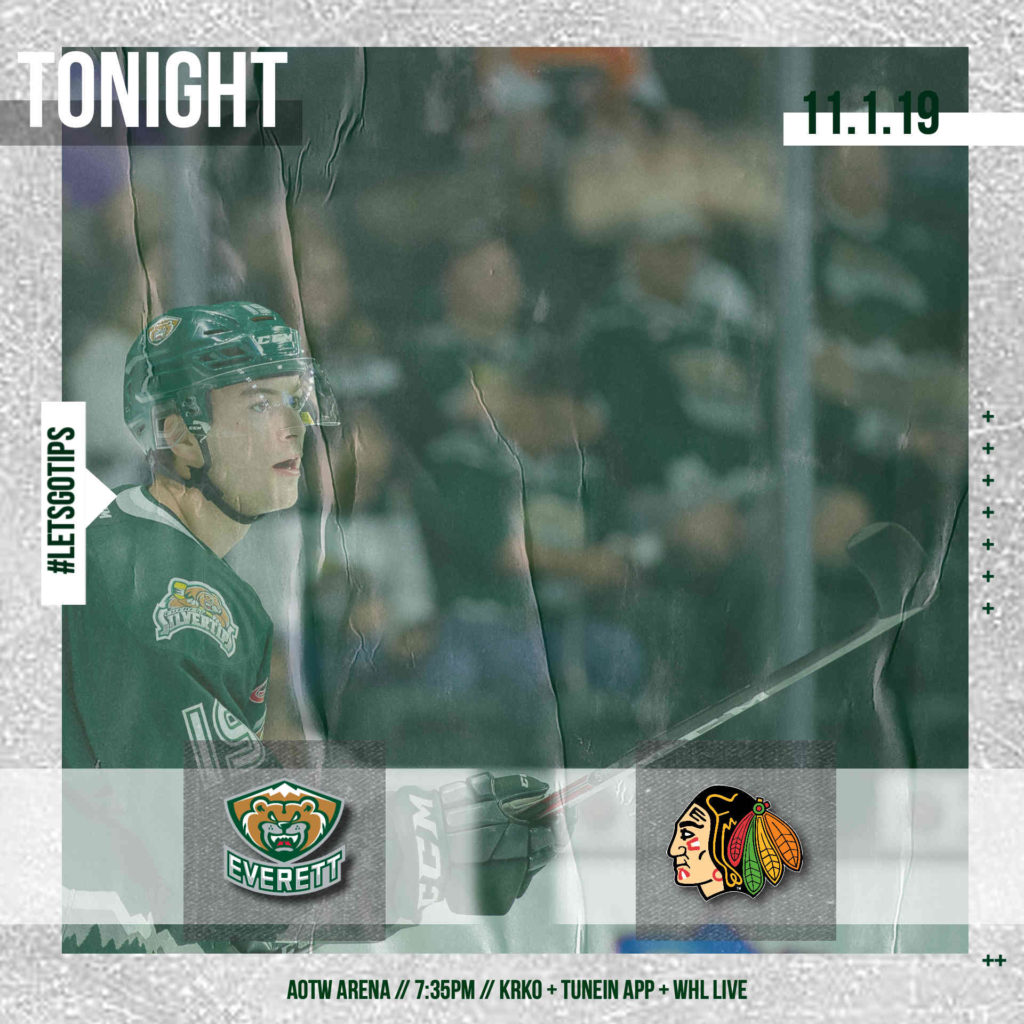 TONIGHT’S MATCHUP AND SERIES NOTES
First of eight meetings this season … the Tips have won three straight meetings in downtown Everett … all-time record against Portland is 80-70-4-4-6 … in Everett, the Silvertips are 44-32-1-3-2 … the Tips last season went 6-4-0-0 against Portland and won four of five matchups in downtown Everett … tonight’s game opens a set of three games in three days, continuing Saturday vs. Kamloops and then on the road, Sunday at Spokane … the Tips have won five straight games and Portland is 5-0-0-1 in their last six games.

LAST SEASON AGAINST THE WINTERHAWKS:

EVT 3 – VAN 2 (10-25-19): Dustin Wolf turned in 34 saves and the Everett Silvertips rallied out of a 2-0 deficit to beat the Vancouver Giants, 3-2 for their fifth straight win before a crowd of 3,476 at Langley Events Centre on Friday night. The Tips extended their lead to first place in the U.S. Division with a 9-3-0-0 record (18 points) and won their third straight meeting over Vancouver. Martin Fasko-Rudas sealed his return to the lineup with a goal in the first period, while Wyatte Wylie eared a multi point game with a goal and an assist.

DID YOU KNOW?
1) ROLLIN’ OLEN: Tips defenseman Olen Zellweger is currently skating for Team Canada (RED) in the World U17 Hockey Challenge, opening Nov. 2 in a seven day tournament held in Swift Current and Medicine Hat … he will be joined among the Team Canada squads with Silvertips goaltending coach James Jensen.
2) HOWLING GOOD TIME: Tips goaltender Dustin Wolf was named WHL Vaughn Goaltender of the Month on Thursday (second time in his career) … he leads the entire CHL with a .945 save percentage and is tied for the WHL lead in shutouts (2) this season … his current lifetime save percentage of .935 is #1 in Silvertips all-time history.
3) WILLING TO 100: Silvertips head coach Dennis Williams is 1 win away from 100 in his WHL career … he was behind the bench this summer for Team Canada, earning a silver medal at the Hlinka Gretzky Cup in Europe … Williams was named WHL Western Conference Coach of the Year in 2017-18.