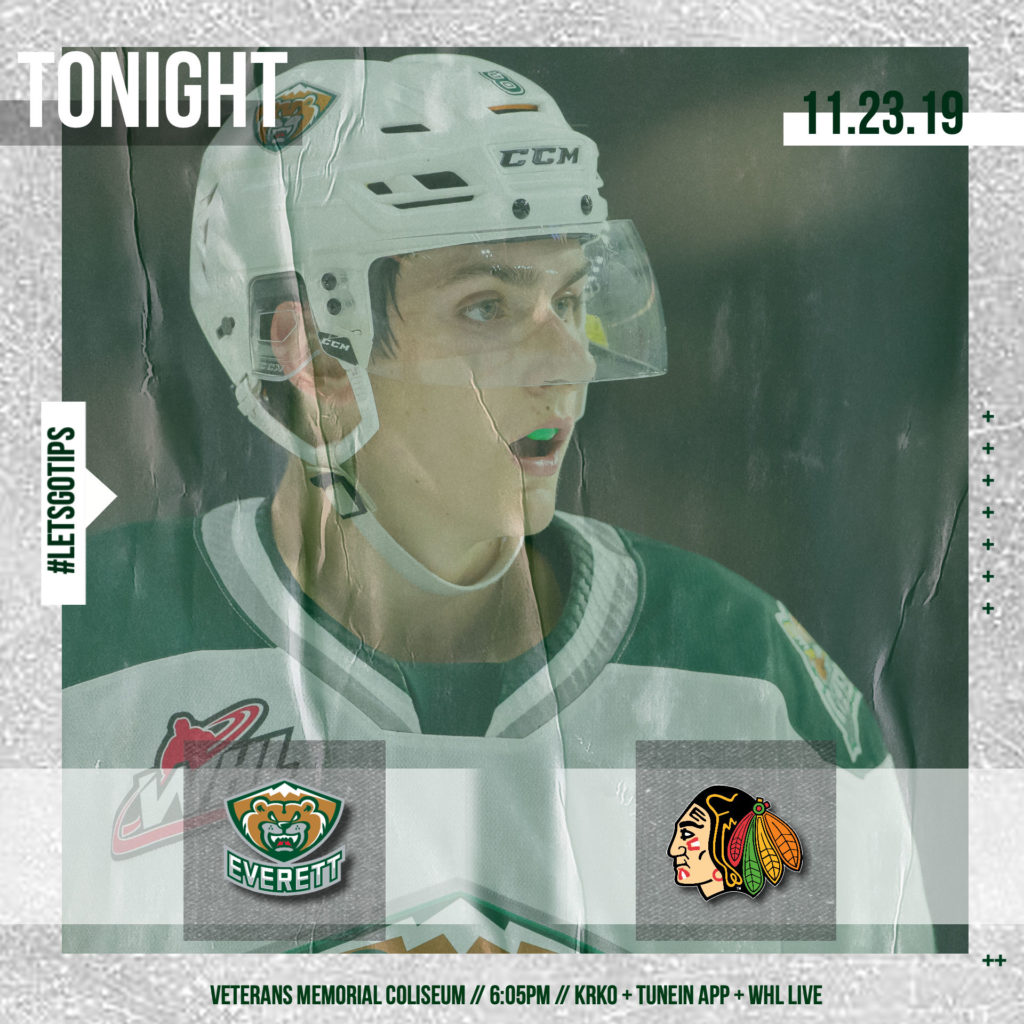 Second of eight meetings this season … all-time record against Portland is 80-71-4-4-6 … in Portland, the Silvertips are 36-38-3-1-4… the Tips last season went 6-4-0-0 against Portland and won four of five matchups in downtown Everett … tonight’s game continues a set of three games in three days … the Tips last victory in Portland came on Nov. 25, 2018 in a 5-3 victory at Memorial Coliseum … the two teams are separated by two points for first place in the U.S. Division.

LAST SEASON AGAINST THE WINTERHAWKS:

LAST TIME OUT:
EVT 6 – SAS 1 (11-22-19): A trio of Everett Silvertips – Gage Goncalves, Jackson Berezowski, and Gianni Fairbrother – each logged two-goal games while Ronan Seeley’s four assists finished one shy of the franchise single-game record, and the Silvertips cruised past the Saskatoon Blades in a 6-1 victory before 5,237 fans at Angel of the Winds Arena on Friday night in WHL action. The Tips, unveiling Mitch Love’s #2 jersey from the rafters in a 15-minute pre-game ceremony, roared back from a 1-0 first period deficit and tied the single game franchise record for most power play goals (5) in a game, scoring on their first four man advantages. Dustin Wolf rebounded from the early goal to post 20 saves and the win, keeping the Blades off the board for the final 55:19 of the game.
SHOTS: EVT 34  |  SAS 21

DID YOU KNOW?
1) HOWLING GOOD TIME: Dustin Wolf is the WHL leader with a .940 save percentage and tied for the league lead with three shutouts … on Sunday he earned his 13th career shutout to move into third place, all-time on the Tips shutout list (passing Michael Wall).
2) THREE’S COMPANY The Tips moved up to #3 in the CHL Top-10 poll, released on Wednesday … they have won 13 of their last 16 games … they are 10-0-1-0 in one-goal games and 9-0-1-0 when leading after two periods this season.
3) PRIMED SEELEY: Ronan Seeley had his first career multi point game on Friday in a win over Saskatoon … his four assists were one shy of the Silvertips single-game record, set by Peter Mueller in the 2006-07 season … he is currently listed by NHL Central Scouting on the “Players to Watch” list (C rating).