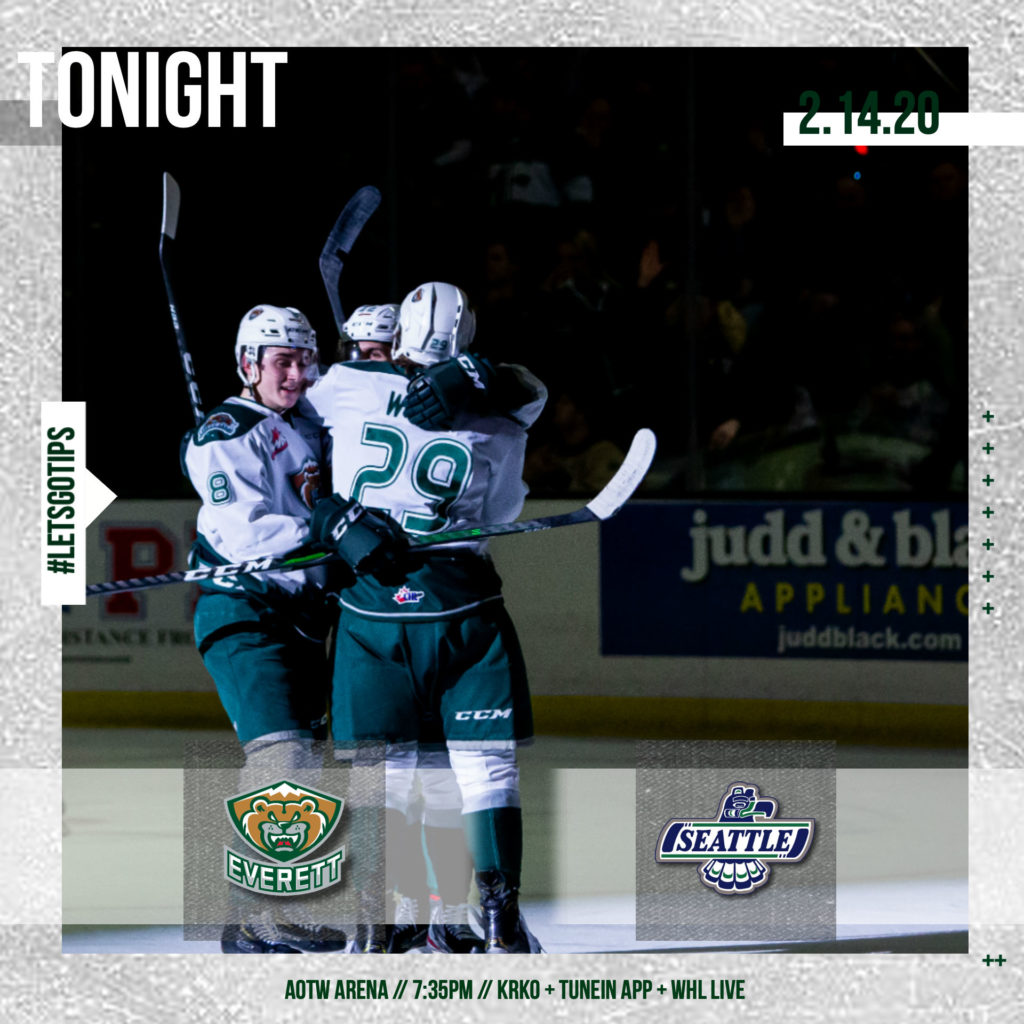 Eighth of ten meetings … the Tips are 86-62-4-7-10 all-time against Seattle … the Silvertips hold a record of 16-6-2-0 against opponents from the U.S. Division … five of seven meetings this season have been decided by two goals or less … the Tips are 8-1-1-0 in the last ten games and are ranked 7th in the CHL Top 10 … the Silvertips will win the regular season series with a victory tonight.

LAST TIME OUT:
SPO 5 – EVT 3 (2-9-20): Leif Mattson scored twice and the Spokane Chiefs used four unanswered goals in the second period to hold off the Everett Silvertips, 5-3 on Sunday before 4,840 fans at Spokane Arena. The Tips settled for four points in their sixth “three-in-three” scenario, and have reached that benchmark in all six occasions this season. It was their first regulation loss in 17 regular season games against the Chiefs, ending a streak of 13-0-2-1. The Tips finished at 7-1-1 this season against Spokane.  Jake Christiansen scored twice, extending his career high to 17 goals.
SHOTS: EVT 29 | SPO 25

DID YOU KNOW?
1) FONSTAD-Y AS HE GOES: Cole Fonstad is second in assists (50) … his 63 points in 46 games, are tied for 10th WHL scoring … his 60 assists in the calendar year of 2019 were 2nd in the WHL, trailing Eli Zummack of Spokane by three.
2) THE DEFENSE NEVER RESTS: Wyatte Wylie (4th, 48 points) and Jake Christiansen (1st, 17 goals) rank among the league leaders among defensemen … Kasper Puutio earned his first Silvertips goal on Saturday at Seattle … Olen Zellweger earned a multi point game on Friday at Tri-City … Christiansen needs one more goal to set a new record for most goals by a Tips d-man in one season (Landon Oslanski set the record in 2012-13).
3) HUNGRY LIKE THE WOLF: Tips goaltender Dustin Wolf ranks among the WHL leaders in the following categories: 1st in goals against average (1.96), 1st in save percentage (.936), 3rd in wins (25), 1st in shutouts (8) … he has 19 career shutouts, tied 7th all time (19) with Kelly Guard and Darcy Kuemper … his next shutout (20) will tie him for 5th in WHL history, all-time with Dustin Slade and Justin Pogge.

radko gudas The Herald
THE STACKS // See Radko Gudas. Get Out of the Way.
13 hours ago