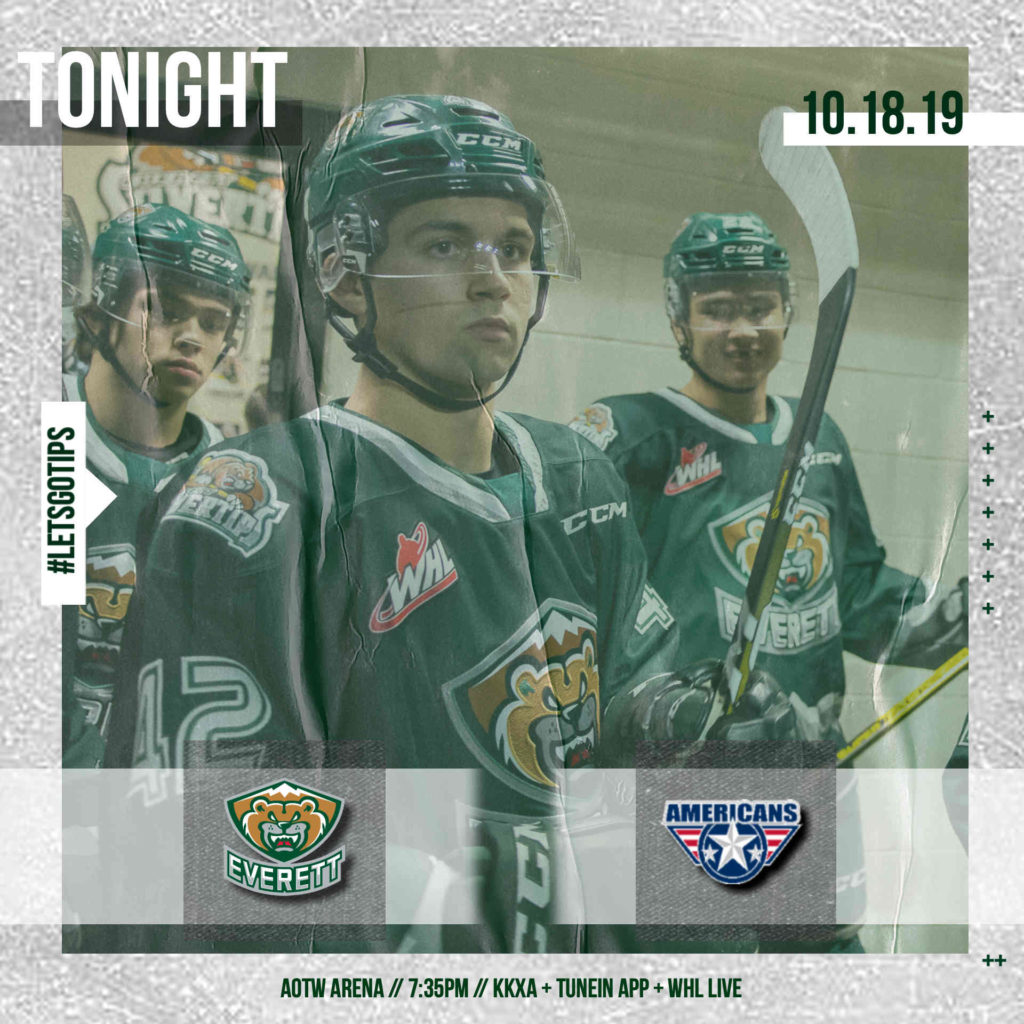 Continuing a five-game homestand … second of nine meetings this season … first meeting since Opening Night, when Tri-City defeated the Silvertips, 4-2 in downtown Everett  … the Tips are 70-57-21 lifetime against the Americans … the Silvertips are 5-1-0-0 in the last six games and are 2-1-0-0 on the current five-game homestand … their next matchup will be Nov. 24 in downtown Everett.

EVT 3 – BDN 2 (10-16-19): Cole Fonstad tallied a goal and two assists in his debut and the Everett Silvertips erased a two-goal deficit to rally and defeat the Brandon Wheat Kings, 3-2 before a crowd of 3,047 in downtown Everett on Wednesday in WHL action. Fonstad, making his Silvertips debut after being acquired Sunday in a trade with Prince Albert, now has nine points in his last three games and helped facilitate an eventual winner by Gage Goncalves, burying his second goal of the game with 15:25 left in regulation. Keegan Karki earned the win with 27 saves in net.

DID YOU KNOW?
1) WELCOME, COLE: Making his debut Wednesday, the newest Silvertip Cole Fonstad delivered first star of the game honors with a goal and pair of assists, all in the first 5+ minutes of the third period in a 3-2 win vs. Brandon … Fonstad last season captured a WHL title with the Prince Albert Raiders and was third on the Raiders with 73 points in 67 games … he was named on Wednesday to Team WHL for the upcoming Canada-Russia Series, Nov. 13-14.
2) HOWLING GOOD TIME: Tips goaltender Dustin Wolf on Saturday earned his 13th career shutout, surpassing Michael Wall for third all-time in Silvertips history … he is fifth with a .940 save percentage and is tied for the WHL lead in shutouts (2) this season.
3) WILLING TO 100: Silvertips head coach Dennis Williams is 4 wins away from 100 in his WHL career … he was behind the bench this summer for Team Canada, earning a silver medal at the Hlinka Gretzky Cup in Europe … Williams was named WHL Western Conference Coach of the Year in 2017-18.