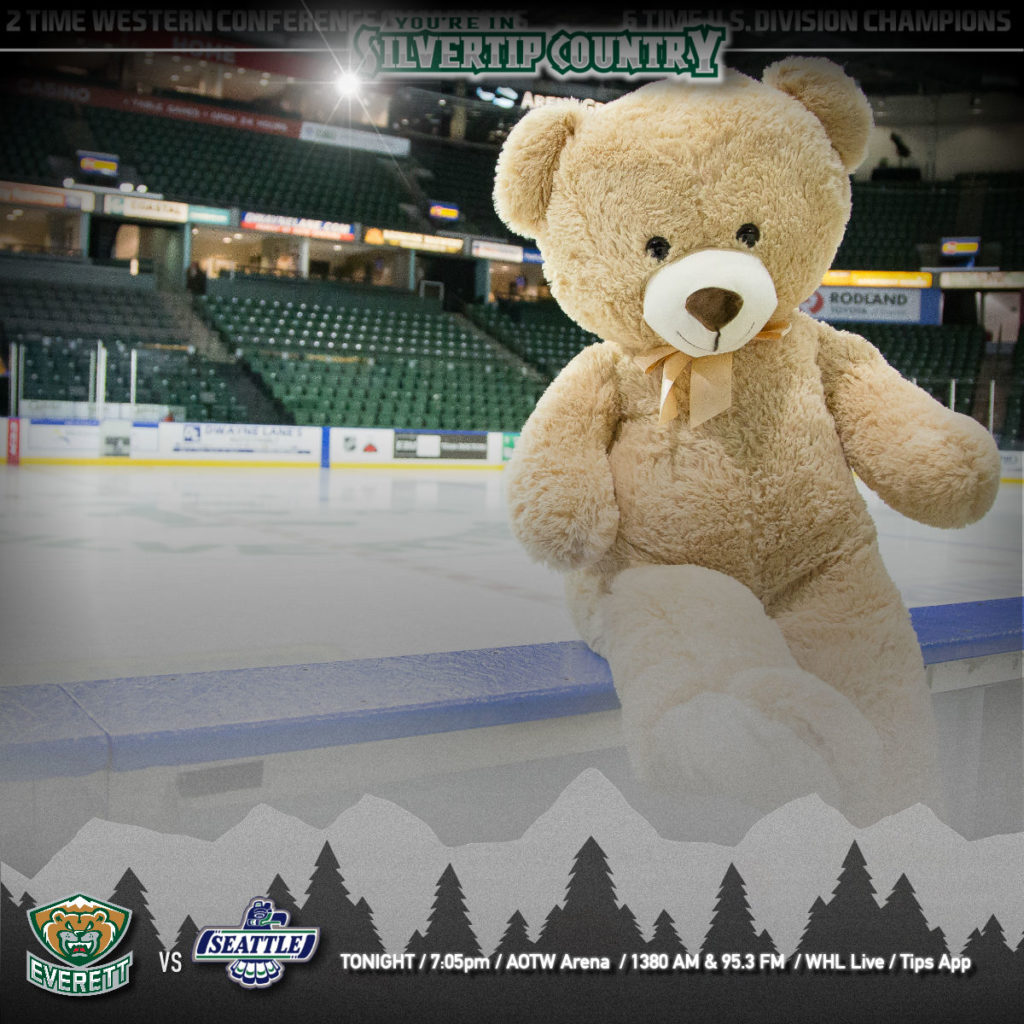 The Silvertips take on the Seattle Thunderbirds in their fourth meeting of this season … the Tips are 3-0-0-0, head-to-head this year and 77-58-20 in the all-time series … tonight will be the first meeting downtown Everett since the Tips defeated the Thunderbirds, 2-1 in overtime on Oct. 5 … the Tips are 50-20-9 at home in the lifetime series … they have won the last six straight, head-to-head, including the first round of the WHL Playoffs … the Tips are 11-0-2 in the last 13 games and 13-3-1-1 against opponents from the U.S. Division.

Teddy Bear Toss presented by Jersey Mike’s Evergreen Way … designed to collect new or gently used stuffed animals to donate to support the Christmas House organization along with distribution assistance from WARM 106.9’s Teddy Bear Patrol … once the Silvertips score their first goal of then evening, fans in attendance are encouraged to throw their teddy bears onto the ice, to be collected and distributed to Christmas House and WARM 106.9 in support of underprivileged families and children during the holiday season …

At tonight’s game the Silvertips welcome Dave Tippett, Senior Hockey Advisor of NHL Seattle to participate in the pre-game ceremonial puck drop … Tippett is serving the organization with development of its hockey operations infrastructure … the NHL granted expansion to the city of Seattle, Wash. on Dec. 4 for play to begin in the 2021-22 season … Tippett has 14 years of experience as an NHL head coach with Arizona and Dallas, earning the Jack Adams Award in 2009-10 as head coach of the Coyotes and helping lead teams to three division titles.

LAST TIME OUT:
EVT 4 – VAN 1 (12-14-18): Bryce Kindopp scored a pair of goals and Dustin Wolf stopped 37 shots as the Everett Silvertips crushed the Vancouver Giants in a 4-1 victory and a battle of two first place teams, before 3,866 fans at Langley Events Centre on Friday night in WHL action. The Silvertips, earning their 10th win in 11 games, ruptured a scoreless game in the second period with a four-goal rally in a span of 6:47. Dawson Butt and Reece Vitelli also collected goals, and the Tips finished with a split of the four-game series with Vancouver.

The Silvertips are making their home ice at A.O.T.W. Arena the host venue for USA Hockey’s training camp for the upcoming 2019 IIHF World Junior Championships … Team USA – unveiling their preliminary roster on Dec. 5 – will include Jack Hughes (projected #1 overall pick in the upcoming NHL Draft) and skate in downtown Everett between Dec. 14-18, showcasing a collection of the top end U.S. born players under 20 years of age … all practices starting today, lasting through Monday, are open to the public and free of charge … full schedule of Team USA skating sessions is available at www.everettsilvertips.com.

Did you know? The Tips have helped collect and donate over 25,000 stuffed animals to underprivileged kids locally since 2015-16 through Teddy Bear Toss.